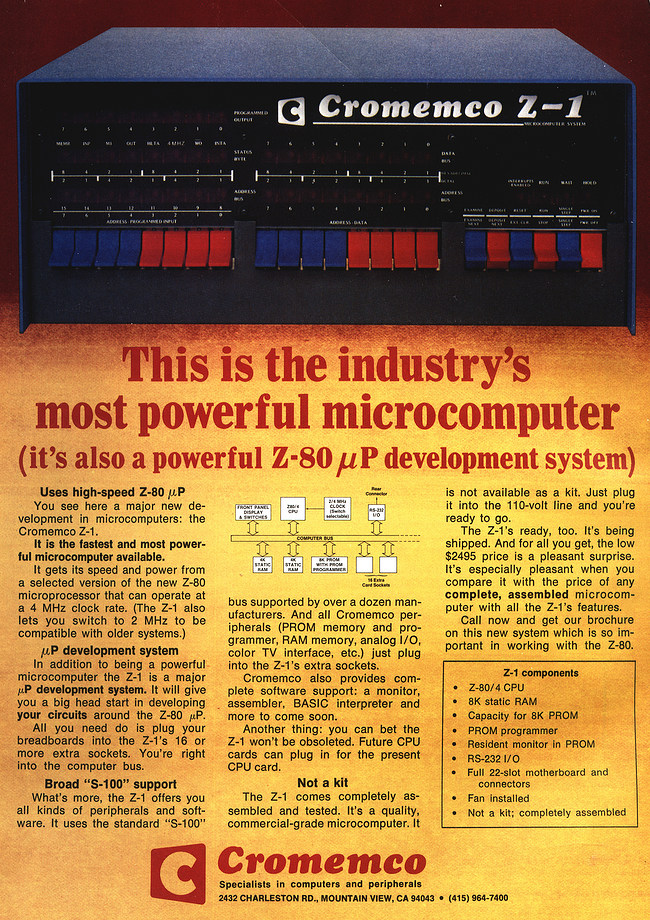 "Cromemco Z-1: This is the industry's most powerful microcomputer"

This advert is for a Z80-based machine on an S-100 bus, similar in form to many of the computers of the time, such as the Intel-based IMSAI 8080, which is not surprising as it was basically an IMSAI chassis with Cromemco innards[1]. It makes claim to be the most powerful micro available - indeed the clock speed of the Z80A it used of 4MHz was nominally quite high for the time - even though it's not always a like-for-like comparison with the clock speed other processors, the Commodore PET and Apple II which would be announced during this year ran 6502 processors at only 1MHz, however due to differences in the way the two processors worked, this was roughly equivalent to a 2MHz Z80, which would still make the Z-1 about twice as fast (ignoring other differences in graphics and I/O). The Z-1 retailed for $2,495, or about £14,600 in 2020 and was Cromemco's first machine, originally released in August 1976.

Cromemco had formed after Roger Melen had purchased the second Altair 8080 off the production line for his friend Harry Garland to work with (the two had already been working together since 1970 writing articles for Popular Electronics[2]). The two of them built several add-ons for the Altair before coming up with an advanced (for the time) graphics card called the "Dazzler", which proved so popular that they incorporated Cromemco in order to sell it together with their other add-ons. The name "Cromemco" was derived from the name of their Halls of Residence at Stanford University - Crothers Memorial [3]. The Dazzler apparently found a home driving US TV weather forecast graphics for much of the 1980s.