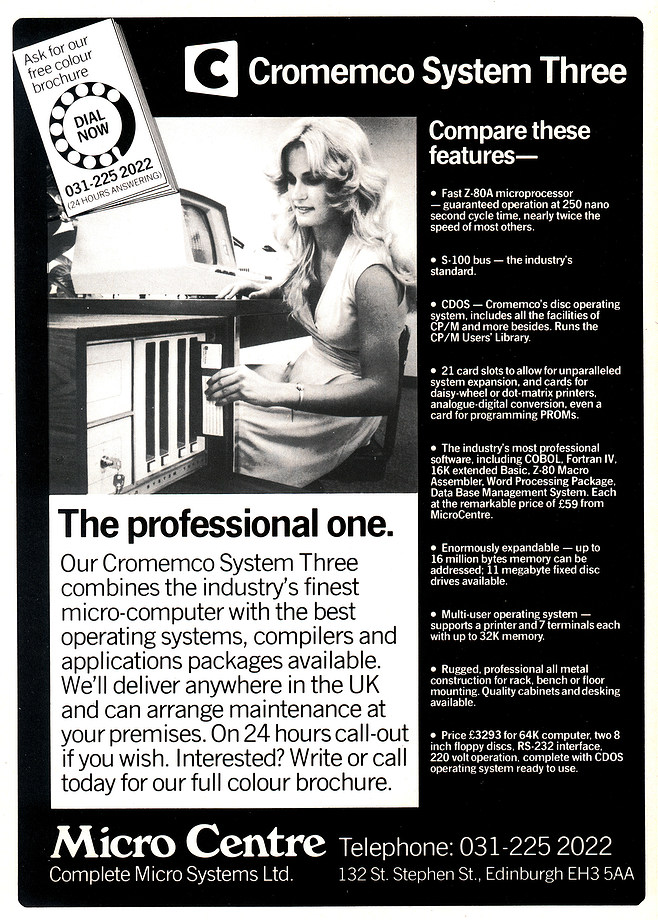 "Cromemco System Three - the professional one"

With a 4MHz Z-80A CPU and expansive 21 card slots, the System 3 was particulary impressive in being able to address 16MB of memory - a fairly fantastical amount in 1979, where 4-32K was the normal order of the day. The advert also nicely shows off the fashion in 70s and 80s adverts: the use of low-cut dresses and boobs to sell computers. The price of the system was £3,293 - an snip at about £18,400 in 2020 terms - and an additional hard-disk sub-system, the HDD-11, was available for £5,025 (£28,100). Also check out the handy-sized 8" floppy disks in use - these were Persci's Model 277 drives and used IBM 3740 formatting to give 1.9MB per disc. The system as a whole reviewed quite well - Sue Eisenbach wrote in October 1979's Personal Computer World that "there is nothing gimmicky about the hardware or software. The hardware is solid; the operating system is more extensive than CP/M; the supporting software is reliable, comprehensive and well documented"[1]. Somewhat unusually, it was one of relatively few companies not to use Microsoft's de-facto standard BASIC. One advantage of this was that Cromemco's BASIC pre-compiled each line as it was entered in to machine code, which saved on storage and made programs much faster to run. There's some blurb on Cromemco the company at Wikipedia

A couple of months earlier, the first 64K memory card for Cromemco systems had been debuted in the UK by Edinburgh-based distributor MicroCentre. The card cost £1,100 including VAT - around £6,160 in 2020 money, which actually represented a saving of 43% over the previous 4 x 16K cards[2]. That's still about £1.8 million per gigabyte in 2014 prices, although that was a drop from about £125 million per gigabyte in 1975.