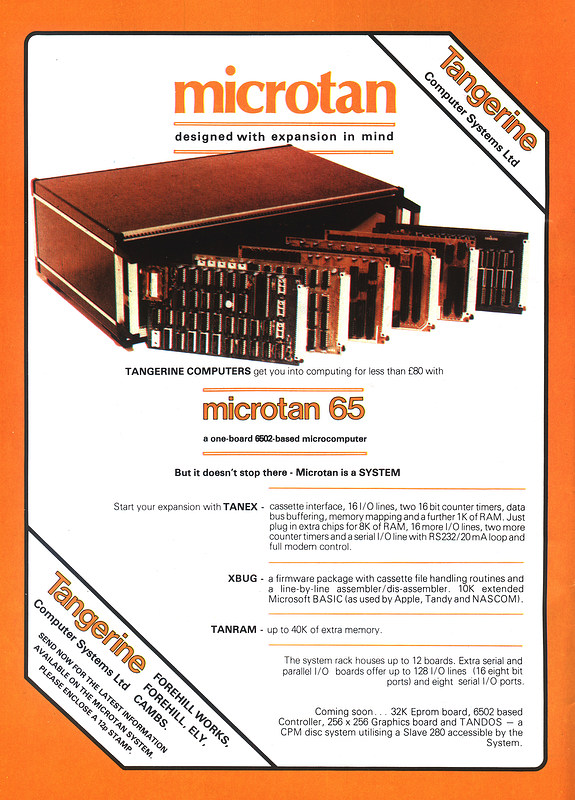 "Microtan 65 - Designed With Expansion in Mind"

The basis for the Microtan 65 was a 6502-based single-board computer, which as advertised was sold for the bargain price of £80, only about £330 in 2021 money. The ad is slightly misleading, as that didn't include the chassis or the case - just the board. The ad is also nicely representative of the "overlap phase" in computing, where kit computers, or computers assembled in bits (where everything like video, memory and a keyboard was an add-on extra) were still being sold even though more modern fully-built computers had been around for several years (not least the Commodore PET, TRS-80 and Apple II) - even the IBM PC was on the market in the US. However, there was clearly still a demand for this form factor, and £80 was, regardless of how much soldering had to be done to get it to work, a price only matched by "toy" computers like the Sinclair ZX80 (the ZX81 was not launched until towards the end of 1981). Tangerine's technical director Paul Johnson went on to start the computer company Oric[1].

By 1982, as the Microtan had built up something of a cult following and the Tantel Prestel adapter was out, the company followed up with plans for its next machine - the Tangerine Tigress. With three processors, including a Zilog Z80A CPU, a Motorola 6809 for I/O and a dedicated graphics processor, lots of ports, built-in networking and advanced graphics, including the capability to do polygon shading, Personal Computer World was calling it a "dream machine". P‌CW's Peter Rodwell's main wish though was that the Tigress came in a suitably stripey case[2].

Tangerine eventually abandoned the Microtan 65 after about 10,000 systems had been sold, however in late 1983 it was resurrected by Microtanic Computer Systems, who had acquired all the rights to the system and decided to re-launch it[3]. The updated Microtan board shipped with a similar (and optional) 19" frame and a power supply and came with the option of several peripherals, including a proper keyboard and a disk unit. It retailed for £59.95 (£200 in 2021 money) for the basic Microtan, with an optional keyboard costing an additional £79.95 (£270) and a colour VDU board adding on an extra £89.95 (£310).

The 3,000-member-strong Tangerine Users Group (TUG) had also been active in the survival of the Microtan 65, in particular through the efforts of the group's Bob Green. TUG had even been supplying its own hardware items such as the VDU 80/82 80-column video card, nearly a year before Microtanic's updated efforts, as well as their first serious hardware project - the Programmable Graphics Module[4].