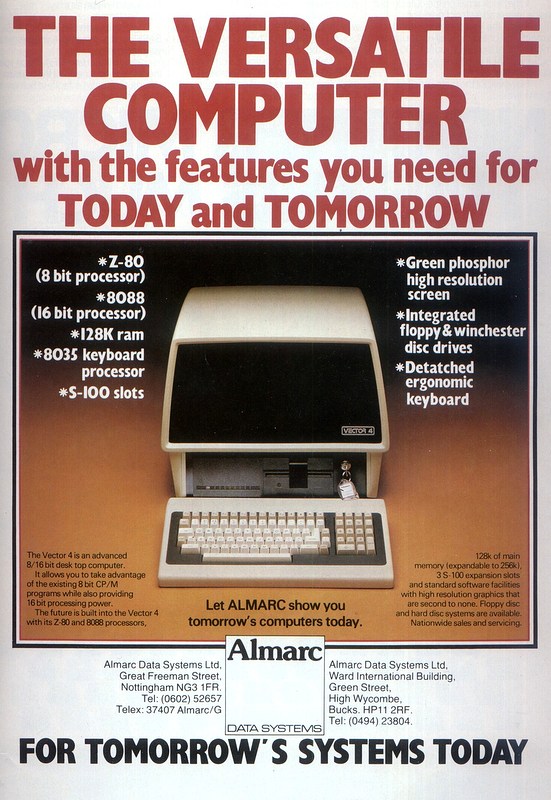 Vector 4: The Versatile Computer with the features you need for Today and Tomorrow

This entry is one of the odder-looking of any in the entire collection. It's for Vector Graphic's Vector 4, as distributed by long-time UK distributor Almarc Data Systems, It was one of many machines around that were dual-processors - not in the modern sense, but literally having two entirely different CPUs, a 6MHz Z80B for 8-bit CP/M action and an Intel 8088 for more modern 16-bit software. It also included three fairly old-school S100 slots, a type of bus that gives it a direct lineage to the old "second generation" machines like 1975's Altair 8800. Contrary to the company's name, this machine was noted to posses neither vector displays nor graphics in general - a comment that Personal Computer World's Guy Kewney pointed out wryly whilst announcing the arrival of the Vector 4 in the spring of 1982[1].

At about the same time, Almarc, "based on this experience [with Vector Graphic]" (no doubt a euphamism for copying, as the machines were considered as quite similar to Vector's) actually launched their own micro system, called the Series 8. It retailed for £4,000 (about £14,900 in 2021 money), which was not cheap, but at least they had announced it as being "mainly for the business market". Most Series 8 models were multi-user and they came with a minimum of 3MB disk storage - apparently the machine's MP/M-II multi-user software was even "usably reliable"[2]. MP/M was the multi-user version of CP/M, the standard operating systems for nearly all business micros of the period.

By November 1982, Vector had finally set up an actual UK office, on William Street in Windsor. The question asked in the trade press however was how long S-100 systems would stay around in the face of competition from IBM and DEC. Although Vector's systems were considered to outperform many others through good engineering, it was thought that it was more the fact that true networks had yet to really take off which was why people were still buying S-100 multi-user and multi-processor systems, even though they could often cost two or three times that of a standard microcomputer[3]. The answer, in Vector's case as a company, was about another two years, after which Lore Harp, one of the founders, left and the company finally fizzled out around 1986/1987. The failure to decide whether to take on the IBM PC or not has been given as a reason for the company's eventual failure[4].

Before that, Almarc found themselves in financial difficulties at the beginning of 1984. By this time they appeared to have moved on from distributing Vector Graphics' systems and were shifting their own "Spirit Micro", which was thought good enough to save after Almarc's collapse. They were bailed out by High Technology Electronics Limited, part of the giant Grand Metropolitan Group (which also owned Burger King at one point), in a deal struck on the 21st January, although this did not include the company itself (the fate of which was left to the receivers). The purchase of the assets, company name and premises ensured that the Spirit micro would remain available and supported throughout the 30-strong dealer network[5].

Meanwhile, Dr. Robert Harp, husband of Vector graphic's co-founder Lore Harp and MD of the company, had left the company to become MD of Corona Data Systems. This company announced a raft of IBM compatibles at the end of 1983, including a portable machine aimed at the Osborne 1[6].