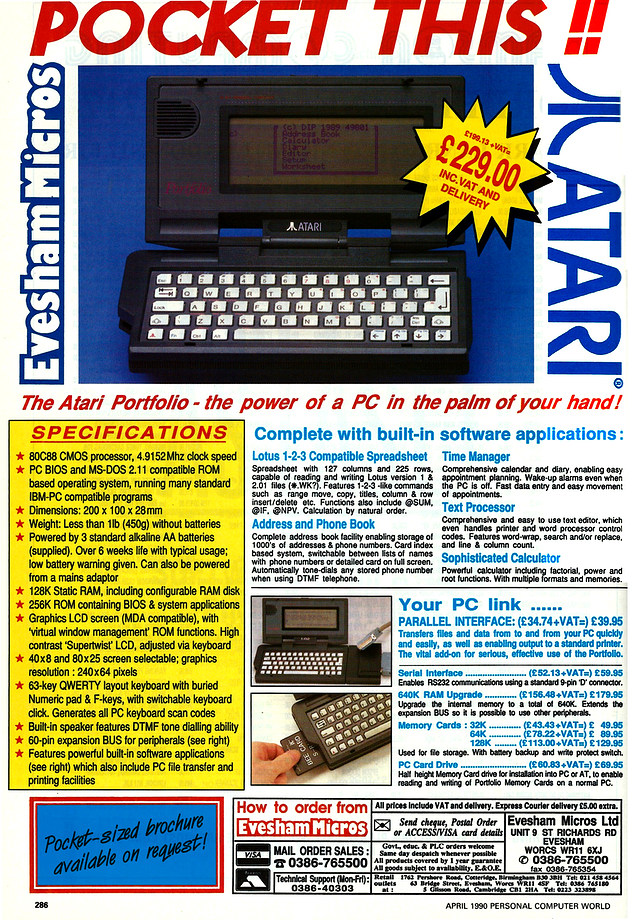 The Atari Portfolio - the power of a PC in the palm of your hand!

Sometimes considered as the very first true IBM-compatible portable[1] and originally known as the PocketPC, but eventually christened the Portfolio or Folio (depending upon source) specifically for the UK market, this Atari PC-compatible portable machine, using a CMOS version of the 8088 - the 80C88 - running at nearly 5MHz, plus MS-DOS 2.11 in a 256K ROM, was based upon a prototype built by development house DIP and originally designed by ex-Psion engineers[2] David Frodsham and Peter Baldwin. The name DIP came from their names - David and Peter - plus that of Ian Cullimore[3], although Personal Computer World was suggesting that it meant Distributed Information Processing.

The company had been founded in Guildford, and was initially run as a Psion system house which marketed customised Psion software as a way of funding its development of the Portfolio. The company wasn't finding much interest in its machine in the UK and so went over to the US, where CNN picked up on the prototype and ran a feature on it.

Atari US took notice and swiftly signed a deal to build and market the machine, as well as take over the product's final design, which was handled by the designer of the Atari ST. Ironically, it was Atari UK which received the first batch of machines from Japan, where they were being built[4].

The ability to run DOS directly from ROM was unusual, as it was something that the regular MS-DOS couldn't actually do, as it expected to be either loaded into RAM from a disk, or loaded into RAM from ROM. To get around this restriction, the Folio team had spent some two years creating what Personal Computer World described as "an imitation" of MS-DOS which would behave just like the real thing.

Folio had also managed to get around MS-DOS's legendarily-poor ability to suspend running programs, and could actually resume almost immediately where it left off, unlike a regular PC with its long-winded BIOS start-up process[5].

MS-DOS compatibility actually seemed to be something of a side-show for DIP and Atari, as the latter was pitching at people more at home with personal organisers than personal computers. To that end, the Portfolio came with built-in applications, much like Psion's Organiser, comprising address book, calculator, diary, editor and a spreadsheet program called Worksheet, which was said to be compatible with version 1.1a Lotus 1-2-3 files.

"definitely not an upmarket calculator"

Atari was deliberately avoiding marketing the 'Folio as an MS-DOS machine because its compatibility only went so far - the operating system itself was actually called DIP Operating System 2.11 - and quite a few MS-DOS features were missing, meaning that many MS-DOS programs wouldn't run anway. 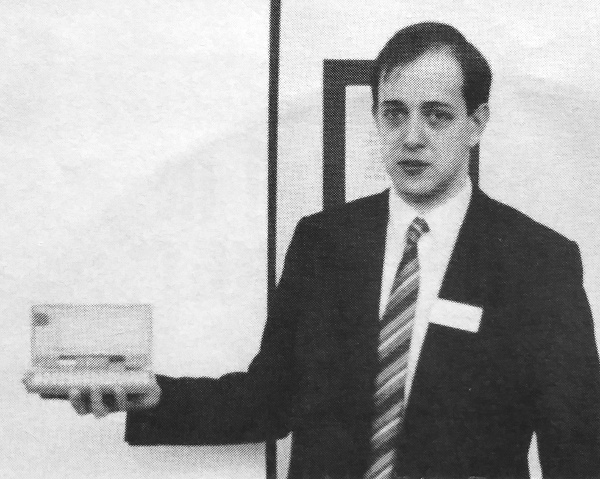 David Frodsham of DIP, one of the Folio's designers © Popular Computing Weekly March 1989Pitched somewhere in-between Psion's very portable but cramped Organiser and Cambridge Computer's usable-with-proper-keyboard but much bigger Z88, the Folio was aimed at "users of desktop PCs who can't be bothered with the bulky portables currently on the market".

It was also said by David Frodsham, one of the Folio's inventors, to be "more like a peripheral than a laptop" which was "definitely not an upmarket calculator".

DIP's Peter Baldwin was particularly proud of the machine's longevity on batteries, saying "it uses three conventional AA batteries, like many Walkmans, and we've found in tests that you can get six to eight weeks' usage out of them - that's using the machine for about two hours a day in a five day working week!".

It even came complete with a version of Lotus 1-2-3 which could handle a 127 x 225 spreadsheet, although both DIP and Atari were keen to get more third-party software houses involved in writing software for the machine, especially if they could be pursuaded to write "pocket" versions of well-known packages. Curiously, the calendar that came with the machine "only" supported dates up to 2049. When questioned about this glaring lack of support for the future, Frodsham quipped "We expect users will be wanting to upgrade by then"[6].

DIP retained the rights to the machine and was hoping that other companies and systems houses might need customised versions of it, whilst both companies hoped to continue their relationship and bring out more portable PC compatibles[7].

However, the machine launched at a time of heightened competition in the portables market, as other machines like that from Poqet Computer Corporation, founded by ex Fairchild Semiconductor and ex-Psion executives[8] and which had just opened its international offices in Weybridge, were appearing. The Poqet was allegedly capable of actually running the real MS-DOS, which was a significant step-up in compatability compared to the Folio's ability to handle DOS-compatible files.

Also in the running was a rumoured portable from Frodsham's old firm Psion, thought to have been about the same sort of A4 size as Clive Sinclair's Z88. 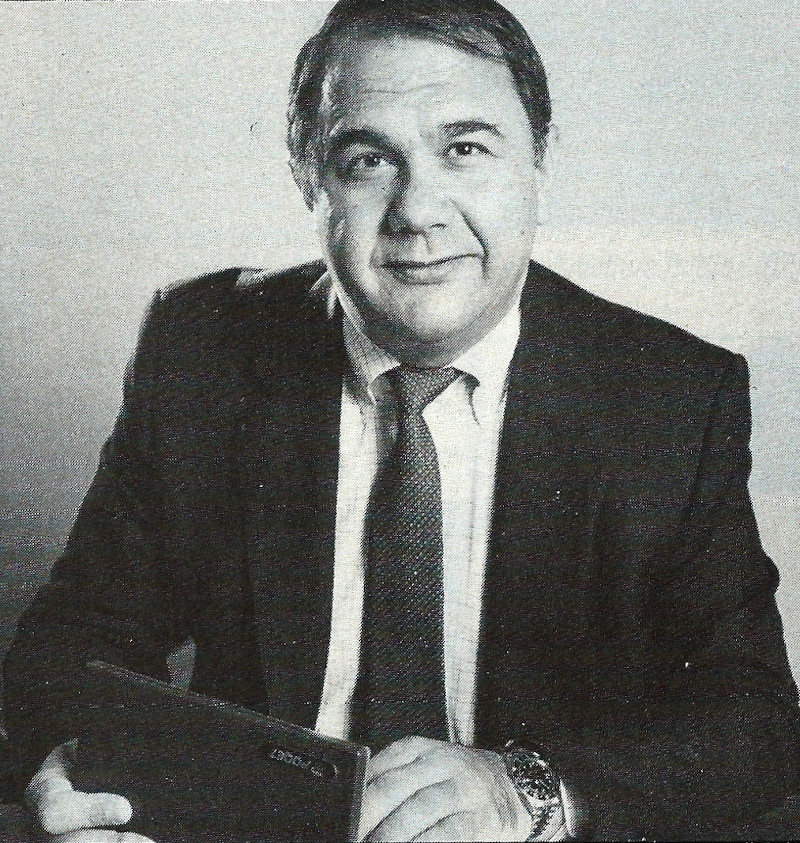 Stav Prodromou of Poquet/Poqet, © Personal Computer World October 1989There appeared to be some crossover between DIP and Poqet, in the form of Stav Prodromou, who had been working for Fairchild at around the time when DIP was started.

The latter company needed capital and later called upon the services of Robb Wilmot of Euroventures - and once the managing director of ICL - who put them in touch with Prodromou, who had by now left Fairchild since it had been taken over by National Semiconductor, and another ex-Fairchild engineer, John Fairbanks.

After the introduction, DIP gave a three-month feasability contract to Fairbanks in order to investigate "methods of developing low-power pocket computers".

Meanwhile, Prodromou and Wilmot had started Poquet, with a plan to have a joint marketing agreement to develop both the US and UK markets. This didn't appear to come to anything, and DIP was unable to raise any finance until Atari and Bob Gleadow stepped in.

Although the machines were different, Guy Kewney still seemed to suspect that the relationship between the two companies could have been made more transparent than it was, that perhaps that it was unlikely that Prodromou knew nothing more about Atari's battery technology other than "that [which] had been printed", or that the basis of Poquet's technology was simply that of TI's "Speak and Spell", which he claimed[9].

By the spring of 1990, the Poqet/Poquet was still nowhere to be seen, even though Prodromou had promised Guy Kewney of Personal Computer World a machine by the end of September 1989. Kewney had written an article for an Australian newspaper, which had been printed just before Christmas of that year, complaining about the lack of machines. Poquet had complained about the report, saying that it had "many" machines available, but when the Australian editor offered to do his own review to correct the negative press, there was still no machine forthcoming, even though "he only needed it for half an hour, after all"[10].

One of the challenges facing both Atari and Poquet, as well as other "ultra portable" manufacturers like Psion, was storage, as it was clearly impractical to haul around a hard or floppy disk unit. To get around this, the idea of "credit card" plug in storage was being extended, with proposals for a common standard and the formation of a new association - the PC Memory Card International Association, or PCMCIA.

Working with the Japanese Electronic Industries Design Association - JEIDA - the two were proposing the 68-pin standard for plug-in cards which would eventually dominate in laptops during the latter half of the 1990s. NEC, meanwhile, had given up on a similar 60-pin design, whilst Poquet had also chosen a 68-pin design but had "inevitably got it wrong", according to Kewney of Personal Computer World, although the company was committed to making changes in order to conform to the new standard.

Psion, ironically given its later purchase of modem company Dacom with its popular Gold Card PCMCIA modems, was proposing an entirely different serial link format, which was now "languishing in the cupboard"[11].

By the end of Summer 1990, Atari finlly announced that it was starting to ship samples of its Unix machine, some two years after it had first announced it, to a few lucky software developers.

The machine was by now known as the TT - not after the famous motorbike race on the Isle of Man, but instead meaning Thirtytwo-Thirtytwo, in an update to how Atari's famous ST was called Sixteen-Thirtytwo. The earlier model number was an admission that the ST had a 16-bit external bus to the 32-bit Motorola chip in it, whilst the new Unix machine was unfettered and ran at the full 32 bits.

As well as the extra bus bandwidth, the TT was using the faster 68030 processor, although the company itself seemed a bit underwhelmed about how fast it was, quoting nebulous comparisons against 386 machines, to which it is was about "twice as fast".

It was also revealed that the new machine no longer had a "blitter" - a chip dedicated to moving lots of video memory around very fast and which had originally helped make the rival Amiga a much more powerful machine. Perhaps this fitted Atari's major market - that of music production, where brute graphics performance was less important than the MIDI interface that the TT still shipped with.

Atari also seemed to be hanging on to its rivalry with Commodore to the extent that it was still deliberately comparing its new TT against the Amiga, which as Kewney pointed out was not any sort of benchmark. The only connection now appeared to be that Atari's owner Jack Tramiel used to run Commodore, and so there was a historic rivalry between the two, but that was it[12].