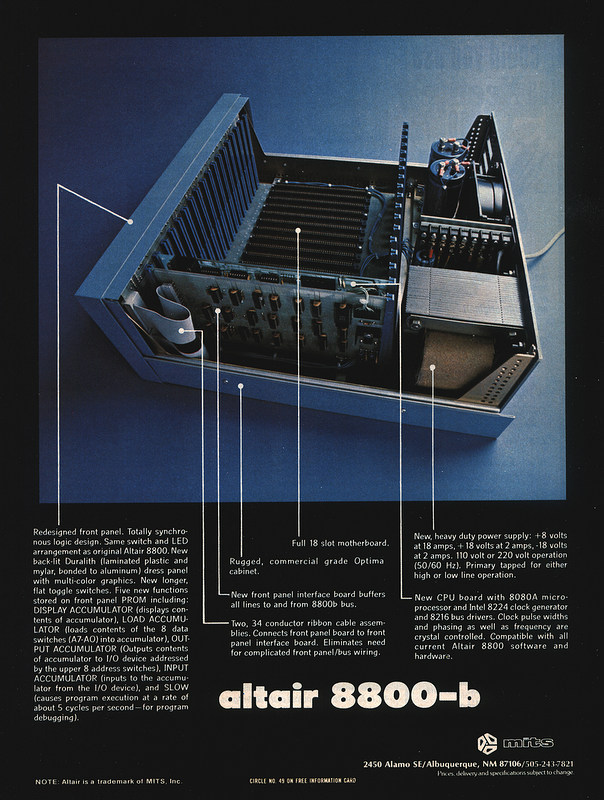 Perhaps the most famous early computer is the MITS Altair 8800, from Micro-Instrumentation Telemetry Systems. This advert is for the "b" revision, and appeared in Popular Electronics at the end of 1976. It included the Intel 8080 CPU and ran on the S-100 ("Altair")[1] bus which the Altair pioneered and which many subsequent micros used.

It was programmed by flicking switches and its display was made up of small lights. Niceties like keyboard input and video display, if available at all, were expensive add-ons for this type of computer, which kept them very much the preserve of scientists, engineers and very keen hobbyists.

It was sometimes said that the computer revolution in Britain started when Martin Underwood imported the Altair through his new company Microlec, although this was disputed in January 1980's Personal Computer World by Guy Kewney, who suggested that actually it was down to Computer Workshop which had released a video display kit on the the market almost a year before the Altair was launched.

Computer Workshop, which started out selling kits, was based in Manchester and had a shop in Leeds. It started selling SWTPC's micros, but in order to avoid confusion with another (unrelated) Computer Workshop of London and Peterborough, which also sold SWTPC micros, changed its name to South West Technical Products[2]. SWTPC, makers of the rival 6800 micro, had developed its own bus - the SS-50.