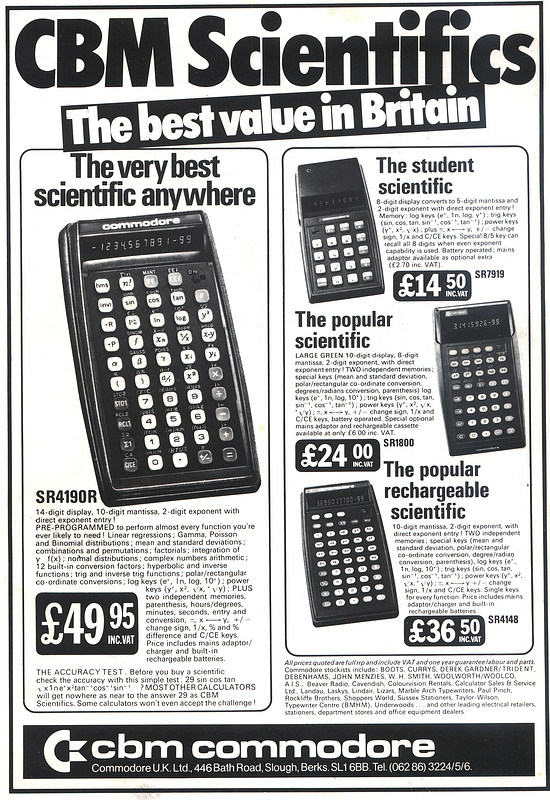 This advert, from the year of the long, hot, summer of 1976, features another one of Commodore's famous "button monster" calculators - the 49-button SR4190R. The face-value price hasn't changed since 1975, but given high inflation at the time, this still means that they're probably about 20% cheaper than 12 months before. This was the year that Commodore acquired MOS Technology - the maker of their calculator chips and the company that had already produced the legendary 6502 processor. The next step would be the world's first "personal computer" - the Commodore PET. A side-effect of this purchase was the inclusion of Chuck Peddle, the designer of the 6502 processor and the KIM-1 board used to demonstrate it. It was he who persuaded Jack Tramiel that Commodore should focus on computers and that calculators were a dead end. The Wikipedia article on the Commodore PET has a bit more about this early history. Some of Commodore's US* series of desktop calculators that came out around this time neatly show the transition from electronic adding machines to computers - the US*5M has exactly the same keys as would be used on the first PET model, the 2001. Commodore became legendary for this recycling of parts - the VIC 20 was in part a solution to a stockpile of 6502 processors that were invisaged for games machines but didn't sell, and its limited memory was due to using up a large stockpile of 1kb RAM chips.