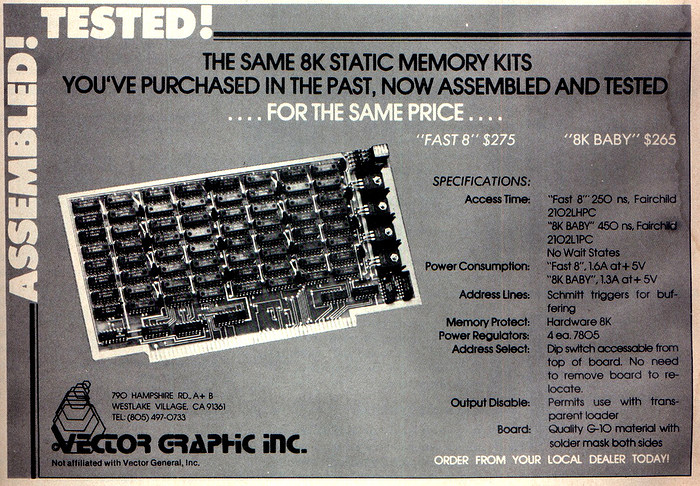 This is an early advert for Vector Graphic, the company formed in 1976 by two housewives - Lore Harp and Carole Ely. The husband of the former, Bob Harp, had been selling these 8K boards from his garage.

In common with other memory boards of the time, in modern terms these were fantastically expensive - 8K for $275, or about £1,290 in 2021 money equates to around £160,000 per megabyte or about £164 million per gigabyte. Even a mobile phone comes with a few GB as standard. Note also how just 8K in memory required a total of 72 chips and 5 other components - with linear scaling, a 1GB board would require nearly 10 million chips occupying around 6,300m2 assuming that 8K fits on a board 30cm x 15cm.

The source of Vector's memory chips was Fairchild Semiconductor, formed by the famous "traitorous eight" who had been working with William Shockley but left, citing "management style issues", to form their own company with the financial backing of Fairchild Camera and Instrument. Fairchild in turn spawned many major Silicon Valley companies (referred to as Fairchildren in a 1978 BBC documentary[1]), in particular Intel and AMD, as one by one, the traitorous eight left to start new businesses.