In 1998, the 69th Entry commissioned a stained-glass window to be installed in St. George's, the Station Church. The 63rd Entry had already installed a window, designed and made by one of their apprentices - Mike Hines - with their process becoming something of a template for windows that followed. The 69th's window was designed and made by John Hawcock of M E Stained Glass, Newark, Nottinghamshire, who was Hines' tutor in lead and Tiffany glass work. It was dedicated in a service held at the church on Saturday 27th June 1998.

The original window design drawingThe idea of a commemorative window started in the middle of 1997 when RAF Halton asked if any Entry wished to have its own stained glass window put into St George's - the station church - at an estimated cost, for a 3ft x lft window, of around £200-£300. The Association had insufficient funds to pay for the full cost, but suggested at its next AGM that it would donate £100 and then ask for additional donations from members, to make up the full amount.

Each copy of the next newsletter came with a photocopy of the proposed window, desribing that the window's colours were to be similar to the 69th's badge, with the four roundels being in the appropriate colours of the RAF and of the Ceylonese, Pakistan and Burmese Air Forces at the time of the 69th's passing out.

The arrangement was two roundels at the top, showing RAF and Ceylonese; in the centre was the Entry badge, with "1953 Coronation", and below that were the roundels for the Burmese and Pakistan air forces. A sincere vote of thanks was given to Dave Symonds, Armourer, for his exceptional hard work in designing and arranging for the manufacture of the window.

There was a good response in reply to the request for donations towards the cost of the window; with the fund exceeding £450. This was considered to be more than enough money and the surplus was put into a "ring fenced" Welfare Fund. The window's design was approved by Halton's padre after a visit from Tony Parrot towards the end of 1997.

On 21st May, the 63rd became the first Entry to fit a stained glass window in St George's Church. The window was designed, made and installed by ex-SAA, now Wing Commander (Retired) Mike Hines of the 63rd. 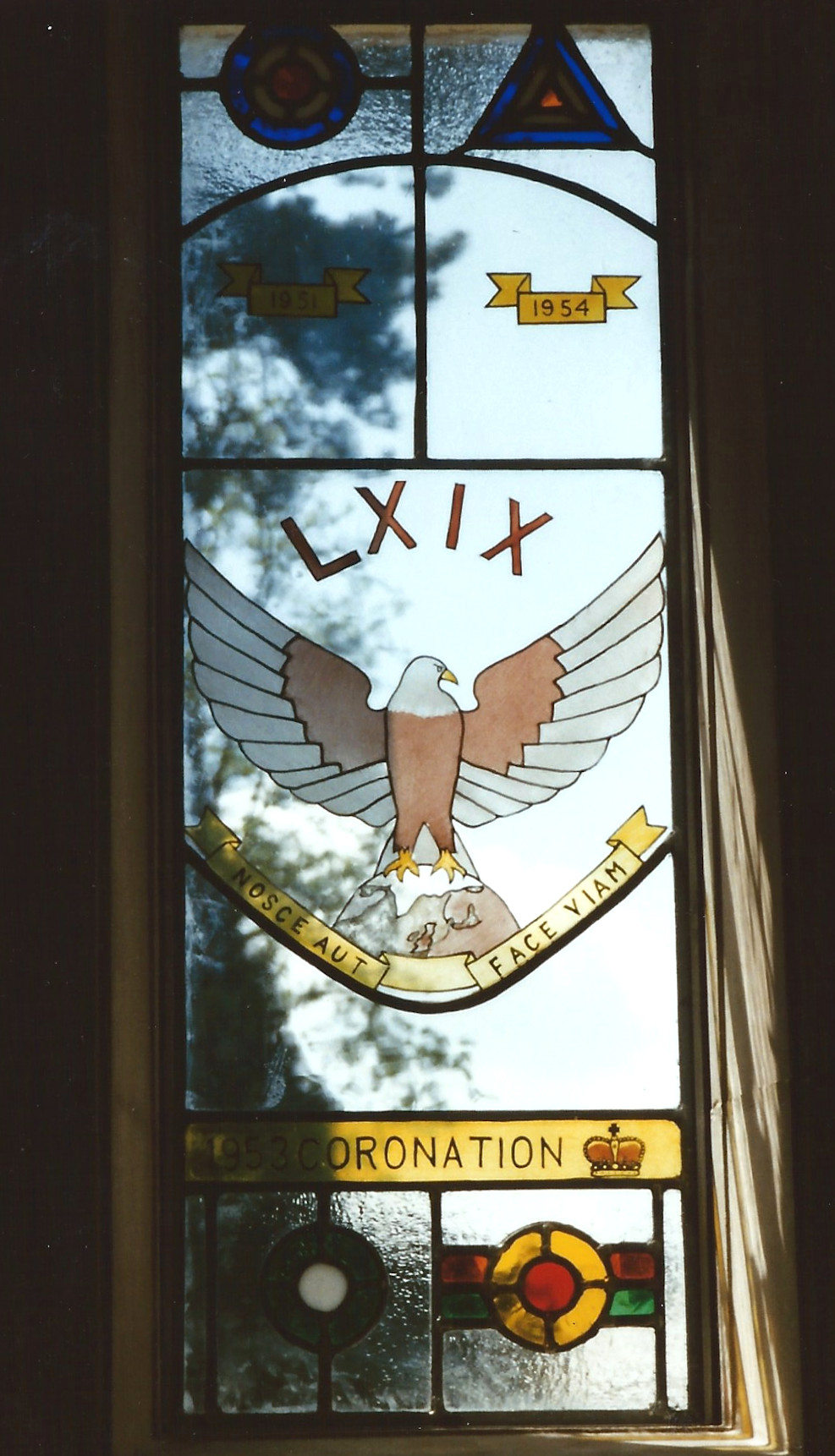 The 69th Entry's window, in placeA step-by-step account of how Mike went about his project is produced below, and the Council recommend this as the definitive procedure for other Entries to follow. The window spaces available (more than enough to provide one for each entry) are nominally 33 and 3/4 inches high and 12 and 3/4 inches wide in a rebated fabricated stone surround. Four were measured prior to fitting the 63rd window, and none of them were larger than this, although they all differed slightly, being identical or up to one eighth of an inch smaller on either or both dimensions. The 63rd's window was made up as a triple glazed unit.

Mike spent £120 on materials, glass painting and firing, and triple glazing, and for the 63rd window labour and travel costs were zero. However, added to your material costs will be the stained glass/leaded light maker's labour charges (and here any glass painting and firing is likely to be expensive), together with one or more visits to Halton for measurement / fitting. Until the first window is made commercially a figure to budget on should be of the order of £350 - £400.

The 40th Entry intend to fit their window on 29th July, and several members of the Entry will gather at Halton on that day. Among other things they intend visiting the Apprentice Museum and attending a recruit passing out parade, the latter being arranged with OC Recruit Training Squadron by HAAA Office. Should any other Entries wish to combine a reunion or window fitting with a POP then the Office will be pleased to advise on dates.

A report on the service to dedicate the 69th Entry's window, from Dave Symonds. It appeared in the 19th Newsletter, July 1998 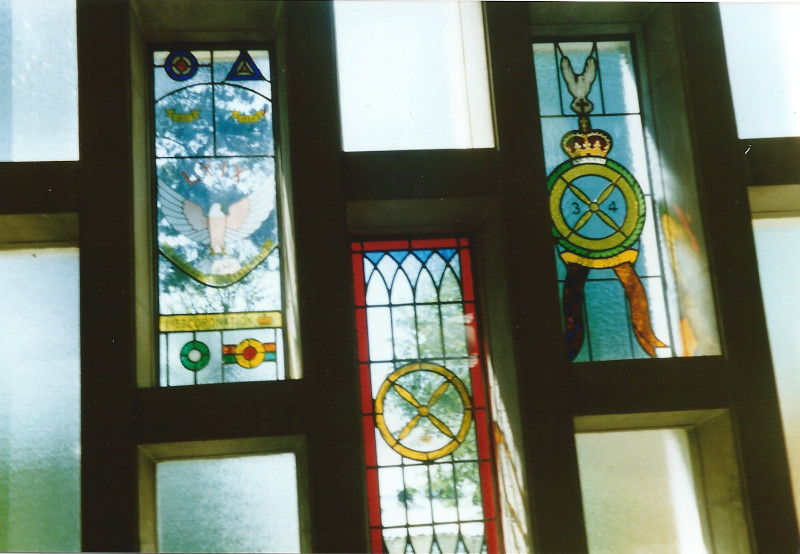 The 69th's window, alongside that of the 34thIt was a day of sunshine and showers as I travelled to attend the dedication of our window. Crossing the Cambridgeshire Fens, it struck me as ironic that I should be motoring to a church service willingly when, as an apprentice, the only time I got "Jankers" was after missing a church parade (actually I got caught the tenth time!). Somebody had noticed our contingent on the parades was visibly shrinking week by week and called the roll. We were shoulder to shoulder in the CO's office!

Arriving at St George's Church at the same time as Tony Parrott and May, we went inside and met Richard Hambly and the Halton padre. We had a good natter while we waited for some more to arrive. Eventually the congregation consisted of Tony and May, Terry Hardeman, John Nelson, Ian Browning and his wife, Ron Townshend and myself. Now all the 69'ers from RAF Jever in the late fifties are members of the Association.

The Service of Dedication went very well. Tony gave a short address about the window and what it means to us. Then Richard conducted the bulk of the service, with Padre Lee dedicating the window. As we sang the hymns the sunlight shone the colours of the window onto the stonework of the red, blue and yellows of the old Wings.

Afterwards, Min Larkin CBE (63rd, HAAA vice chairman) invited us all to the Sergeants' Mess, where the delegates to the HAAA AGM were gathered. Most of us went and had a bite to eat and a drink, where we talked some more. It was nearly three o'clock before we left the Mess - the bar closed! A pleasant day in pleasant company.

Remember, as Padre Lee said, whenever you are near Halton, come into the church to see your window, stay awhile, and remember those who are no longer with us.

In 1999 The 69th also undertook to raise money for a window to commemmorate its Burmese members. The following extracts come from several newsletters as the project progressed:

It has been decided to raise the money for a small window in the RAF Halton church in honour of the Burmese Apprentices. A start will be made at our March reunion. Traditionally we have a raffle as part of the Saturday evening proceedings. This year all the prizes have been donated and ticket sales will make a start for this fund. Should any member wish to make a direct donation to this worthy cause please send it to Derek Gosling, our treasurer (cheques to be payable to "69th Association").

The HAAA has announced that it is proposing to have a window in memory of Don Finlay and subsequently other well known ex Brats. Your Association decided to support this initiative to the tune of £25. We have now heard back that there has been so much donating that maybe we would prefer to use our cash for some other purpose. As reported, some £115 was raised by the raffle at our reunion and a further £30 has been received as donations. If we put these two items together £115 + £30 + £25 = £170 we are nearly up to the cost (£200 approx) for a small window; so six donations of £5? Any monies to Tony Parrott please.

An excellent design has been made by Dave Symonds, consisting of their hat badge. It was shown to an ex Burmese apprentice in the UK and then sent to Alf King in Australia for further consideration. The artwork has now been returned and passed to M E Stained Glass of Newark, Lincs, who hope to fit it by Xmas; the cost will be £500. The 69ers have been kindly assisted by the 77th (Peter Brooks), who have collected and have donated £250 towards our costs. We ourselves, by donations and reunion raffles, have about £150 but your committee have agreed to cover the balance from Association funds. The consecration of the window will take place on the Friday afternoon of our reunion.

And finally from January 2001 by Tony Parrot...

The window has now been fitted. The cost was £500, £250 of which has been donated by the 77th Entry. It will be consecrated at 1500hrs on 21st September and due to the 77th generosity an invitation to attend has been extended to them.

I believe a sincere vote of thanks should be given to Dave Symonds for his design and to both Burmese ex a/as, Alf King (Australia) and Gordon Eadon, 77th (now resident in Lowestoft) for their suggestions.

The result has been a window which will stand the test of time, similar to our memories of all our ex 69th Burmese friends. May they all enjoy the peace and friendship they deserve.