The presentation of the Queen's Colour to The No. 1 School of Technical Training on the 25th July 1952 remains one of the station's highlights. It was received in the presence of Lord Trenchard, the "Father of the RAF" and was consecrated by Canon L. Wright, Chaplain-in-Chief to the RAF, whilst the colour itself was presented to the Queen by Air Commodore J. G. W. Weston, Commandant RAF Halton.

The 63rd was the senior entry at the time, and so was the squadron to receive the colour and provide the guard of honour, however several other entries, including the 69th, were also on parade. The British Pathé film of the event has been digitised and published on YouTube.

The Queen, as yet un-crowned and on one of her first-ever official duties, receives the colour from Air Commodore J. G. W. Weston before presenting it to Sergeant Apprentice F. M. A. Hines of the 63rd Entry, in 1952

F. M. A. (Mike) Hines, who received the Queen's Colour on behalf of RAF Halton's No. 1 School of Technical Training in 1952, was awarded a scholarship to RAF College Cranwell following graduation, where he trained as a pilot. Whilst there, he was awarded the Sword of Honour and in 1956 took part in bombing raids over Egypt as part of 12(B) Squadron at RAF Binbrook. He eventually became Wing Commander and Commanding Officer of the famous 617 "Dambusters" Squadron at RAF Scampton in 1971, before retiring from the RAF in 1984, after over 34 years in service.

The Queen inspects Halton's apprentices prior to presenting the colour. It was the first colour to be received by an apprentices school, and only the third to be presented to the RAF

Hines came full circle in terms of the royal connection when he was one of many former Halton apprentices invited to Halton in October 1997 for a second presentation by the Queen of a Colour. In an interview with the Lincolnshire Echo, Hines was reported as saying "I stood on a stand of apprentices near a picture of me receiving the 1952 Colour and [the Queen] said she recalled the day vividly".

Hines also ended up making a commemorative window for the 63rd Entry which was installed in the station church of St. George's. Hines' tutor in lead and Tiffany glass work, John Hawcock, would make a similar window for the 69th a year later. 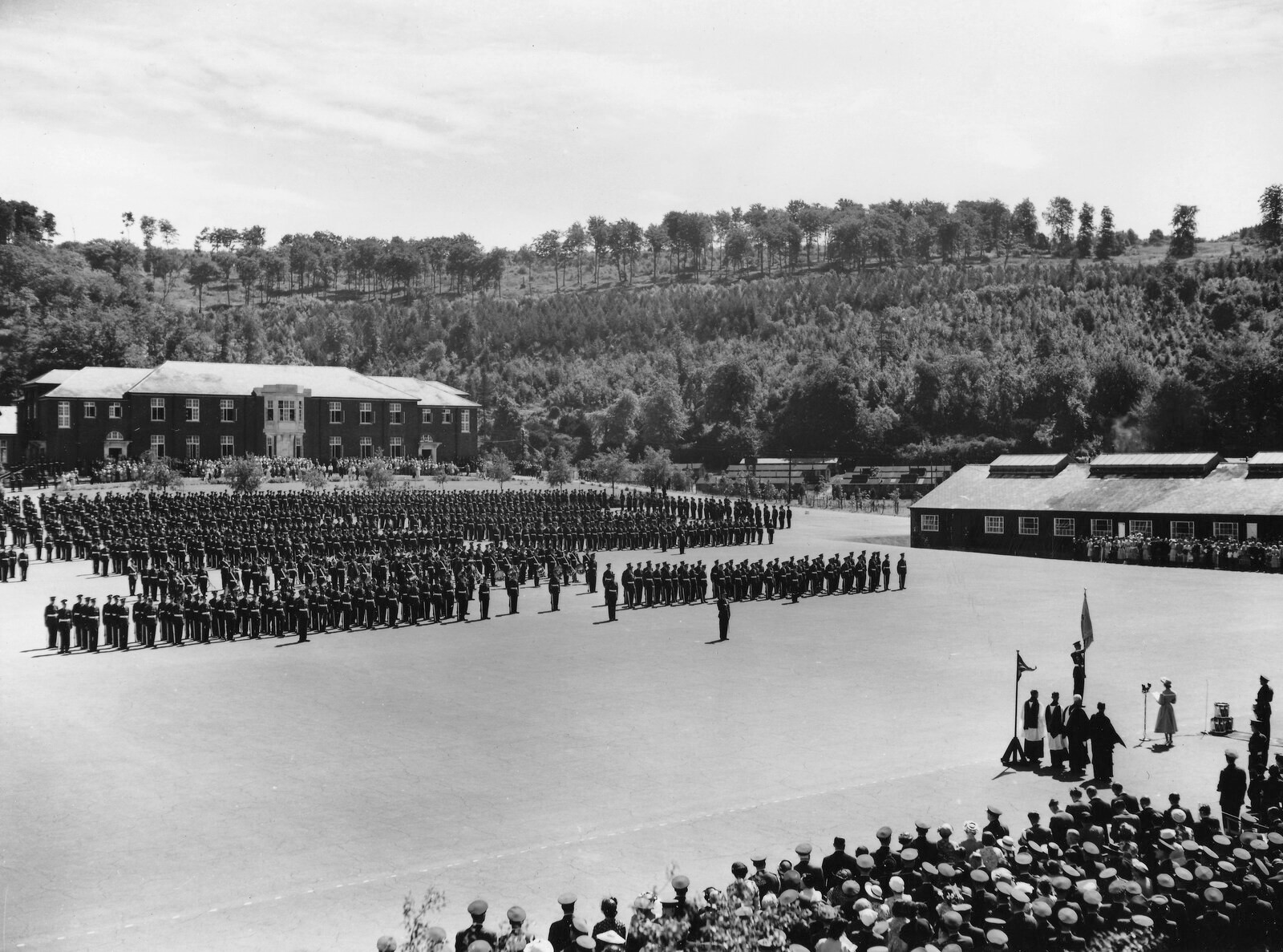 The Queen speaks to hundreds of apprentices at RAF Halton

Memories of the day from the 68th

A recollection of the day by Donald Sykes of the 68th appeared in The Wheel, the New Zealand ex-apprentices newsletter, as reproduced in the Winter 2009 Haltonian Magazine: 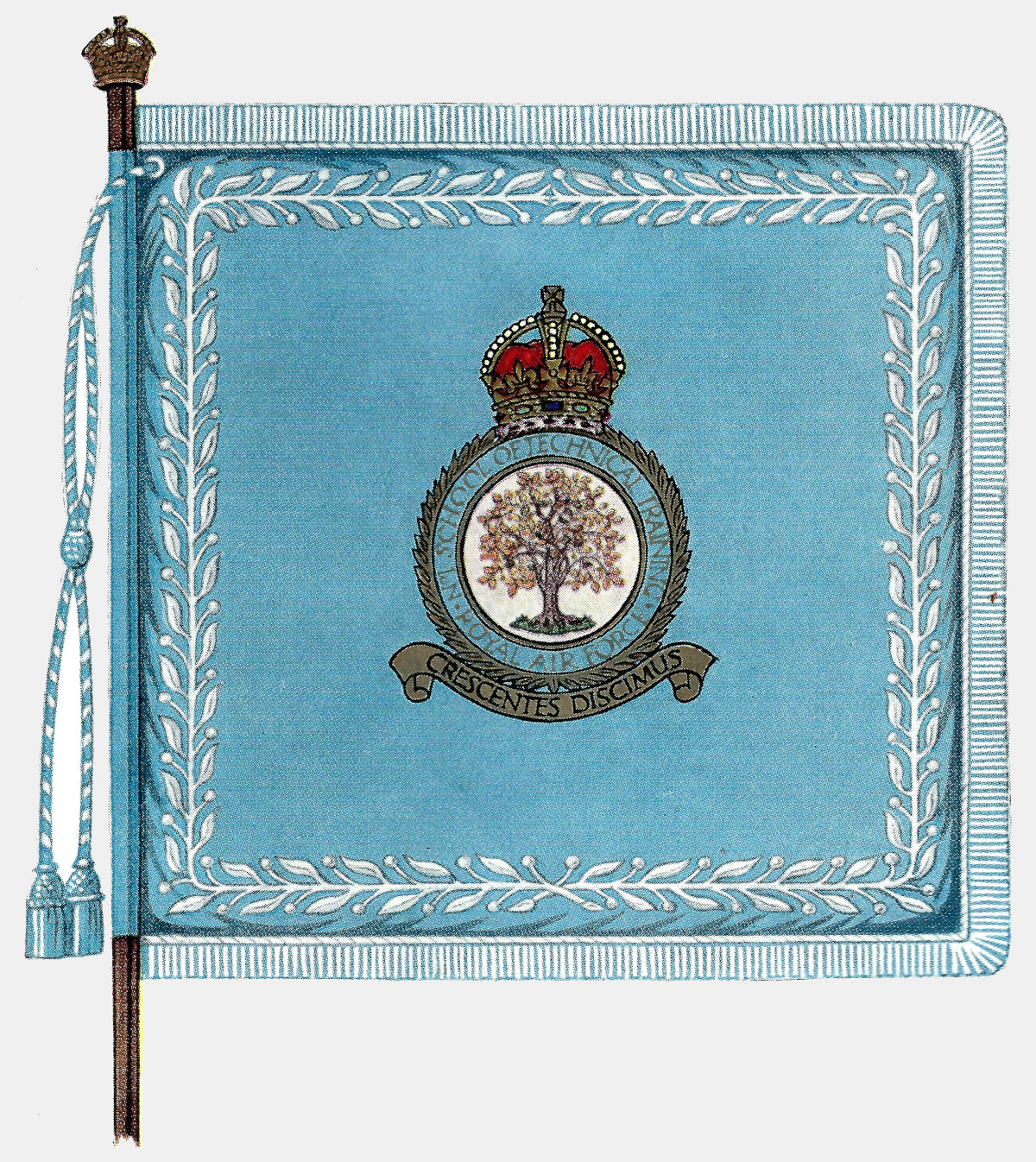 An illustration of the Queen's Colour, which featured in RAF Halton's September 20th 1952 Battle of Britain "At Home" souvenir brochure We had been practicing for weeks, we trumpeters had been learning the Royal Salute with each of us playing in one of three different pitches in order to get that full-blooded harmonious, high-pitched sound which typifies this special fanfare.

At last the great day arrived and Her Majesty, the uncrowned Queen-apparent Elizabeth, arrived at the main parade ground where approximately 2000 RAF Apprentices, including intakes from Pakistan, New Zealand and Ceylon, now Sri Lanka, in the 68th and 71st entries, from Burma, now Myanmar, in the 69th and Rhodesia, now Zimbabwe, in the 70th, were waiting.

Led by the Escort Squadron from the 63rd, they were all standing to attention with rifles sloped awaiting the next command. As her Majesty approached, it came from Gp Captain D O Finlay "Parade, Royal Salute Present Arms!". There was a 'Smack!' then a 'Whack!' as the rifles were thumped by the 2000 palms and finally a 'Crump!' and the ground shook as a thousand odd heels slammed down as one to complete the salute. Then, a heart stopping pause before we trumpeters were playing the fanfare and, though I say it myself, it was superb!

Next came the inspection by her Majesty with the attractive young Queen standing on a dais mounted on the deck of a specially modified Land Rover. She was wearing a light summer dress with a white hat and held on to the rail in front of her with white gloved hands.

As she toured the ranks under a calm summer sky, with the military band playing a gentle air, a mischievous zephyr came from nowhere and caught her dress, gently blowing it upwards, momentarily exposing the royal lingerie. Only those few in the immediate vicinity, standing to attention with their eyes to the front, witnessed this event as she passed and, since there was no Sun newspaper nor paparazzi to sensationalise such a happening, normality was restored when, calmly with dignity the young queen's white gloved hand pressed the dress back down to the designed length. 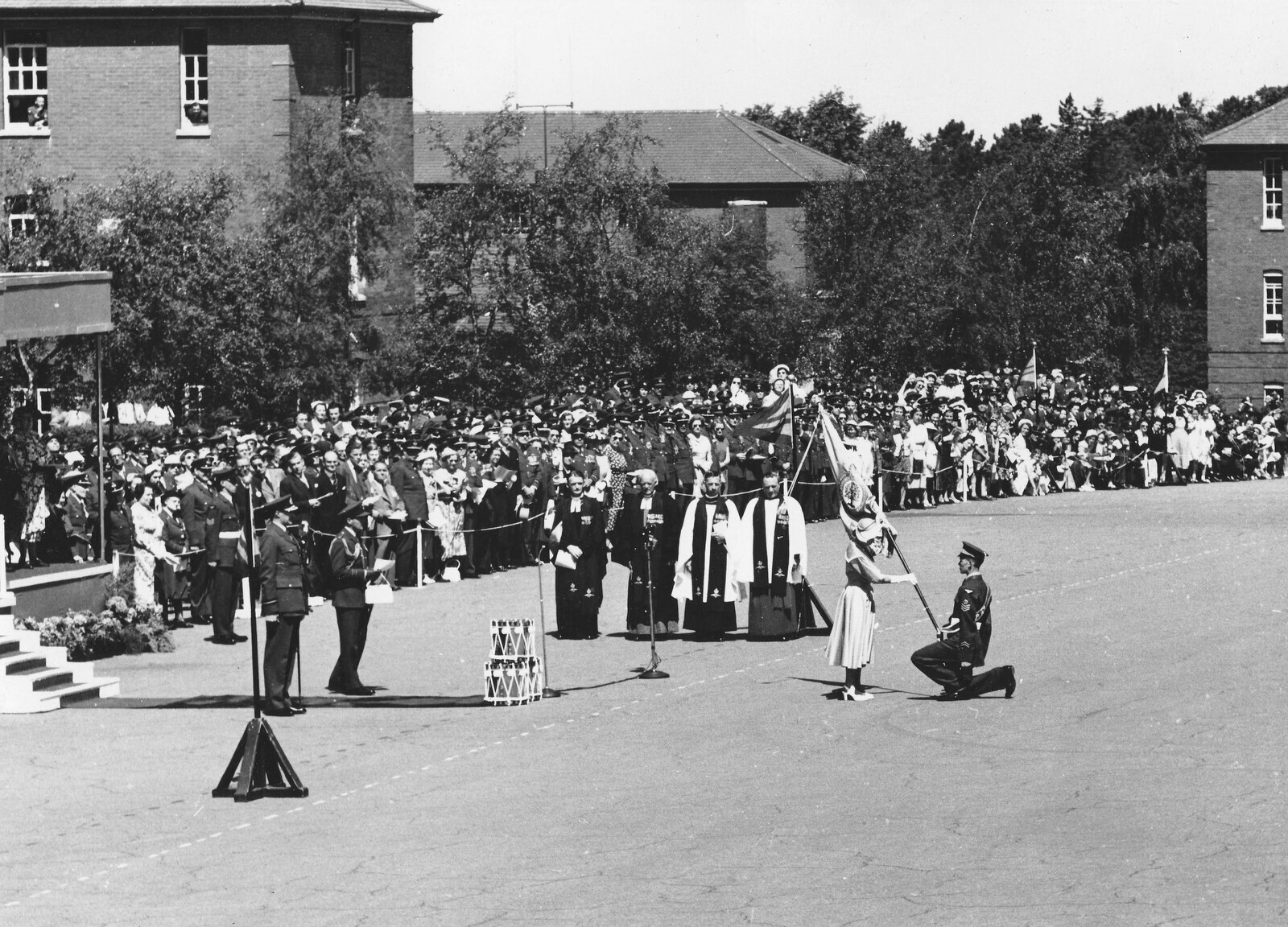 The Queen presents the Colour to Segeant Apprentice F. M. A. Hines

The highlight of the ceremony came when she approached the Colour which had been placed on a pile of drums. She presented it to the kneeling Colour Bearer, Sgt App Mike Hines who was flanked by identical twin Sgt Apps, Clive and Richard Grant, each bearing arms as the Colour Escort. These three were all from the 63rd entry which was the senior entry at the time. This Presentation was shown as part of the film collage at the start of Movietone News, shown in UK cinemas for the next 20 years or so. 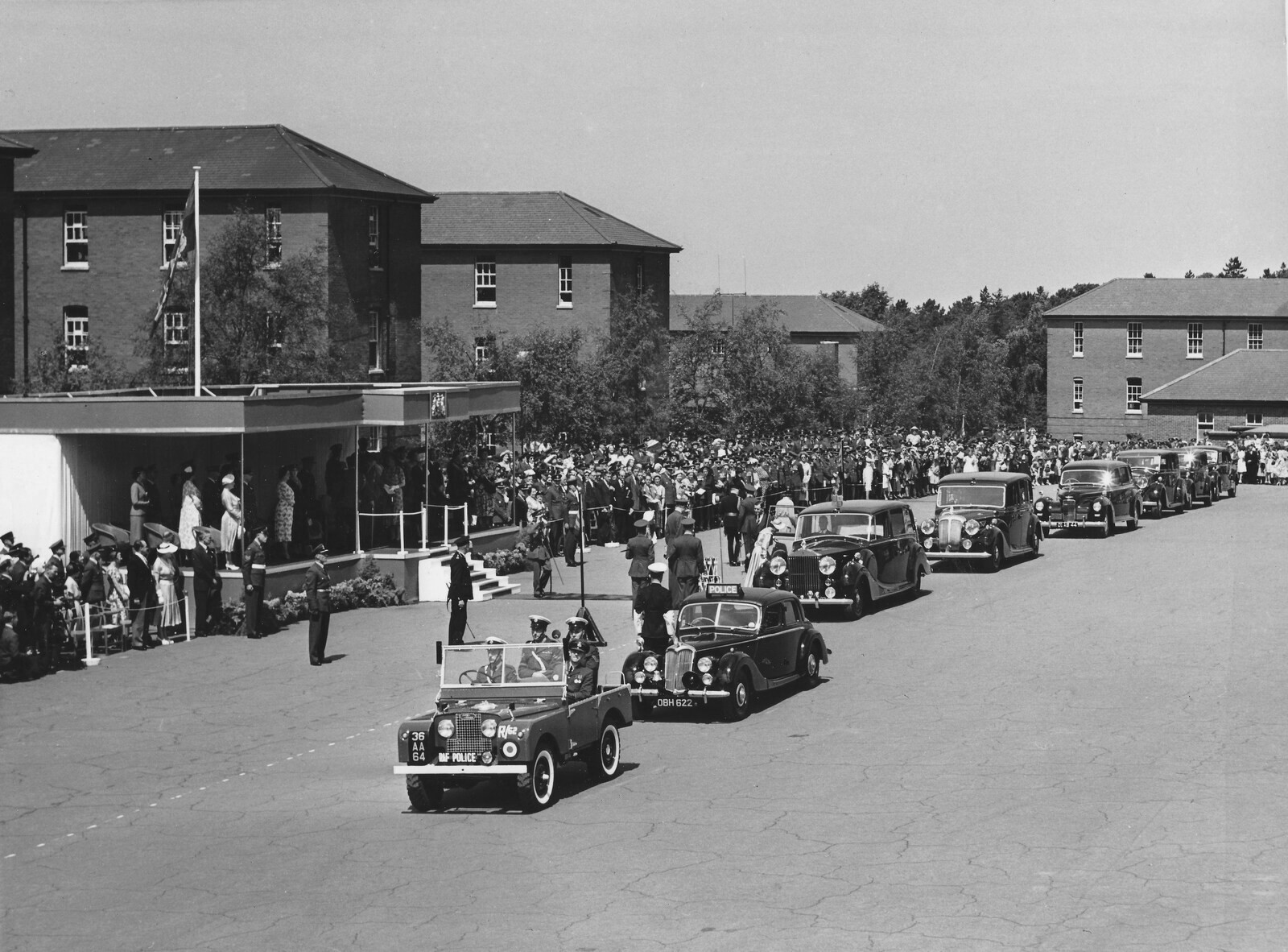 Afterwards The Queen was to dine in Halton House, the magnificent building built by Lord Rothschild and now in use as the Officers' Mess. We trumpeters were lined up in the ornate Minstrel's Gallery, looking down upon the opulent dining room in which long tables were laid with glistening tableware and gleaming silver. Our Bandmaster, WO 'Flem' Carlton, signalled the start and, as he stood conducting us with his back to the dining room, we played "Officers' Mess Call".

As Her Majesty entered the room, we let rip with the Royal Salute fanfare once more. Then, a curious thing happened. As the fanfare ended, 'Flem' crouched down and removed his hat exposing his bald spot. He then, crab-like, moved towards us gesticulating wildly for us to follow suit. We took off our hats and made our way out from the Royal presence. I am sure that if Her Majesty had observed this undignified departure she would have kept her composure but, unlike Queen Victoria, she would have been very amused.