The 69th Entry graduated in the summer of 1954, after three years' of training. The following is extracted from a photocopy of the October 1954 edition of the Halton Magazine 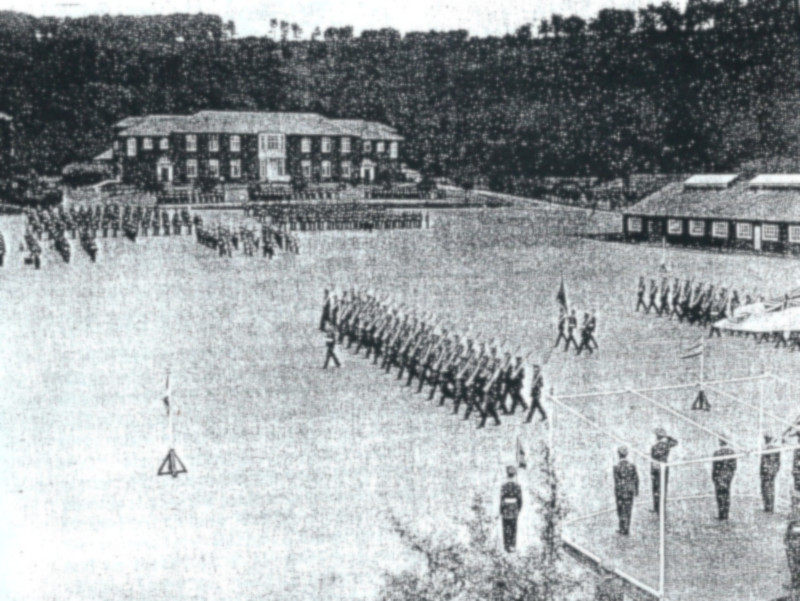 The march pastTHE morning of 26th July dawned dismally and the sun was obscured by a bank of thick, ominous cloud. Hoping for the best, the well-groomed Apprentices marched on to the parade ground — just in time to receive the rain which continued throughout the day. It was a great pity that the weather was so bad because the standard of drill was high — higher than that usually seen on Graduation Days.

The parade was commanded by S/A/A T. G. Gordon and other parade appointments were as follows: 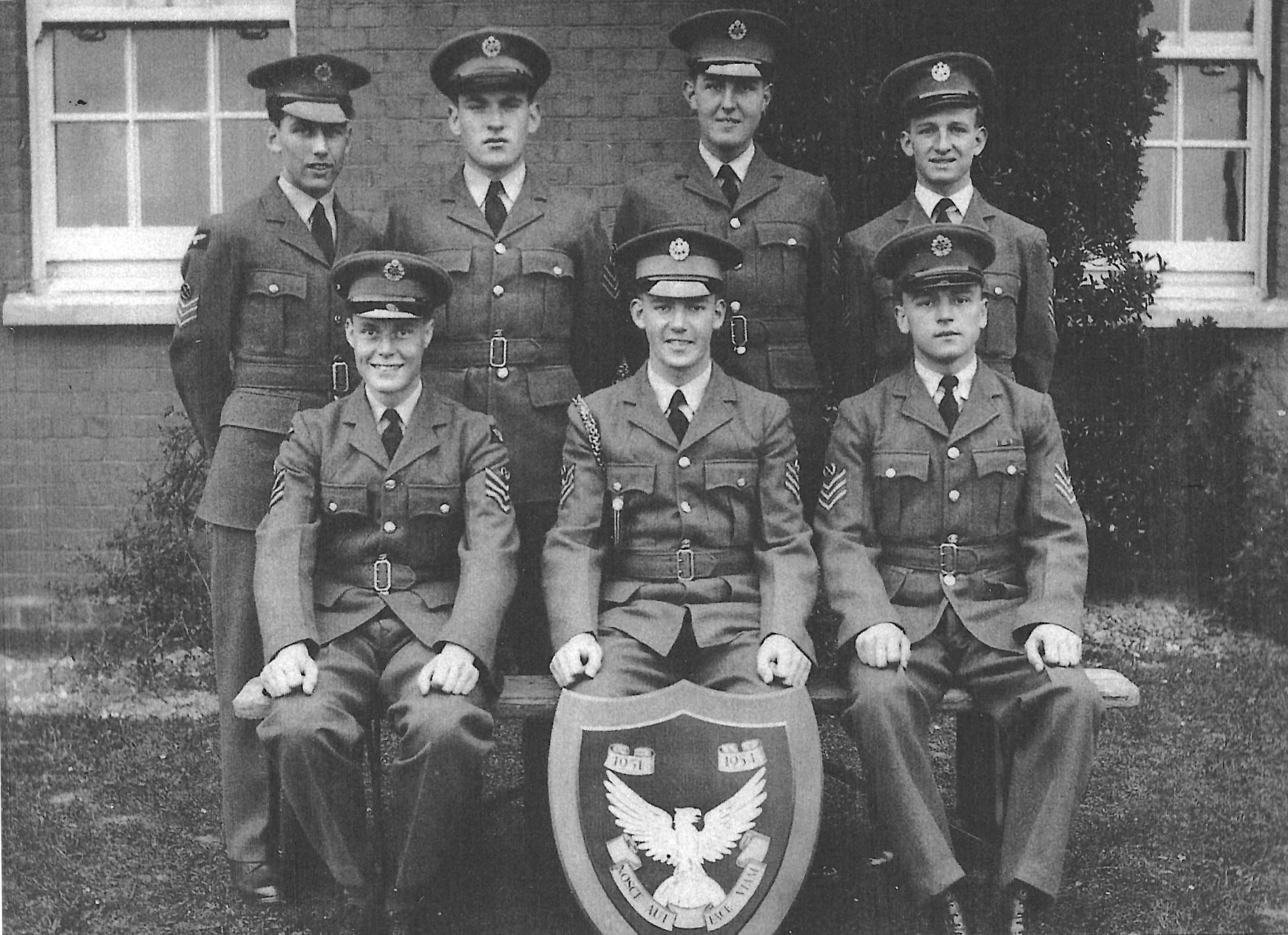 After a short break the outstandingly large audience, including the 69th Entry and their parents, assembled in the Burnett Gymnasium for the prize giving. There, after welcoming the Reviewing Officer and his wife, the Commandant read his report.

Speaking firstly of the school as a whole he said that we continued to have numerous visitors from many walks of life and different countries.

This term our visitors had included an Archbishop, the High Commissioner for Ceylon, the Chief Engineer of the Indian Air Force and representatives of King George's Jubilee Trust.

Turning to sport he said that our fine recreational facilities were in constant use by Apprentices and other people, and the Apprentices had every chance of watching and competing against some of the leading athletes in the Royal Air Force.

Of the 69th Entry the Commandant made the following observations. Of the original 357 Apprentices, 109 had been discharged, transferred to skilled trades or re-coursed to junior entries, and five had failed their final examination, but were to be retested shortly.

The remaining 243, joined by 15 relegated from senior entries, were passing out. These included 18 R.P.A.F., 4 R.Cy.A.F. and 25 Burma A.F. Apprentices. Heading the list were three Apprentices who had been awarded cadetships. The results in the practical and theroetical examinations in technical subjects were slightly lower than last time.

In educational subjects the overall average was 53% and though there were no A-l passes there were fewer failures than in the 68th Entry. The Burmese Apprentices who were taking the final examination for the first time did well and the R.P.A.F. and R.Cy.A.F. reached their usual standard. Five Burmese and two Pakistani Apprentices passed the Ordinary National Certificate. Progress in General Service Training and Ground Combat was good.

The entry was fortunate in that selected parties of Apprentices had visited various industrial firms and all had had about 1¼ hours flying. 9 'A' and 10 'B' gliding certificates had been awarded.

In sporting activities the 69th Entry had been outstanding, No. 3 Wing having won the Barrington-Kennett Trophy every year since their arrival as well as having done excellently in the MacEwan, Sigrist and Scott-Paine competitions. Moreover, they had formed the basis of the school teams and had gained 47 school colours.

Obviously the entry had done well and the Commandant congratulated all those who were passing out, leaving them with a word of advice - "You take with you the best wishes of the staff at Halton, but remember you also take with you the responsibility of maintaining the high reputation of the ex-Halton Apprentice". 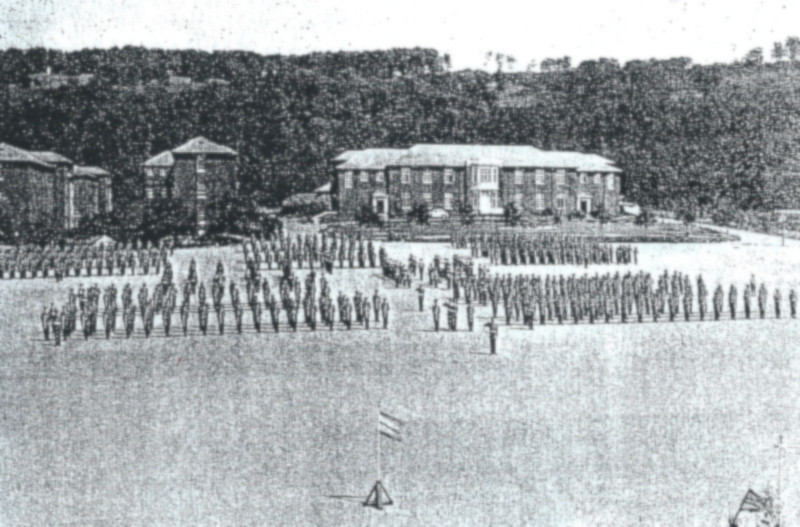 The general saluteThe Reviewing Officer then distributed the prizes after which he spoke amusingly and instructively for a few minutes.

It was, he said, very pleasing to him with forty years experience to meet so many fine chaps just beginning a regular Air Force career. He congratulated both them and their parents in making such a wise choice. He was pleased too to have had the chance of meeting young men from Burma, Ceylon and Pakistan and he wished them all good fortune for the future.

Secondly, it was a life full of fun and interest. This was even more true of the future, for forty years ahead "several of you sitting in this audience may be filling the role of Dan Dare in space ships.". He caused further amusement by suggesting that forty years ahead one of the 69th Entry might be sitting on the platform or even be Chief of the Air Staff.

As the laughter died down he added "There is no basic reason why you should not achieve any of these positions, or high level posts in engineering or the aircraft industry." The advice, as befitted a man in such a high position as Commandant of the Imperial Defence College, was pithy - "Be reliable." On the reliability of technicians depended the efficiency of the Air Force and the lives of other men.

He stressed too the need for reliability in all their activities, not only at the work bench but doing the hum-drum 'fatigues' such as guard duties and drill. Reliability was more important than brilliance. " Reliability means not only always trying to do your best, not letting the side down — it also means admitting your mistakes. If you make them don't be ashamed to own up... Do your best and try to be reliable. 'If you do you will be doing the right thing to yourself and your country, and think that you will find that you will succeed, and the service will do the right thing by you."

The Air Chief Marshal's Graduation report on the 69th Entry, 1954 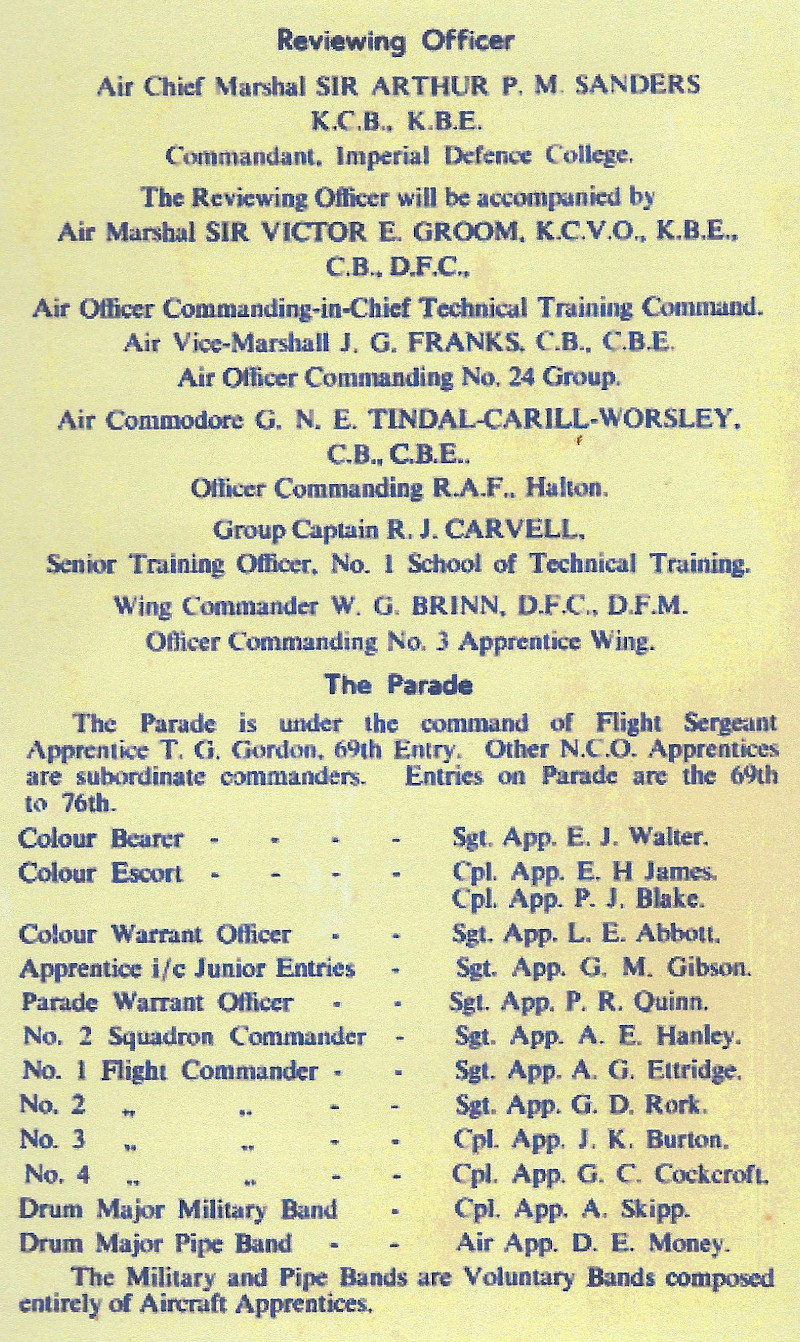 Parade leaflet detailing participants, July 26th 1954Today is graduation for the 69th Entry of Aircraft Apprentices, and it is with great pleasure that we welcome Air Chief Marshall Sir Arthur P.M.Sanders as the Reviewing Officer.

The 69th Entry of 3 Wing, commenced training in September 1951 with a combined strength of 357. During the three years, 109 of the original entry have been discharged, transferred to skilled trades or recoursed to junior entries, with five failing the final examination, but [these] will be re-tested in a few weeks.

Included in this total are 18 Royal Pakistan Air Force, 4 Royal Ceylon Air Force, and 25 Burma Air Force Apprentices. In educational subjects the 69th obtained an overall average mark of 53%, which maintains a remarkable similarity of achievement with the last four examinations.

There were no A1 passes but the failures were fewer than those for the 68th entry. The Engine Fitters showed the best results with an average of 57%, followed closely by the Electrical and Instrument Fitters.

After a brief spell of parity with these trades the Armament Fitters occupied the lowest position with 45%. The percentage qualifying for the Ordinary National Certificate was 32%

The Burmese Apprentices took the examinations for the first time, and achieved good results. The results of the Royal Pakistan Air Force and Royal Ceylon Air Force Apprentices were similar to previous entries. Five Burmese and two Pakistan apprentices qualified for the Ordinary National Certificate. 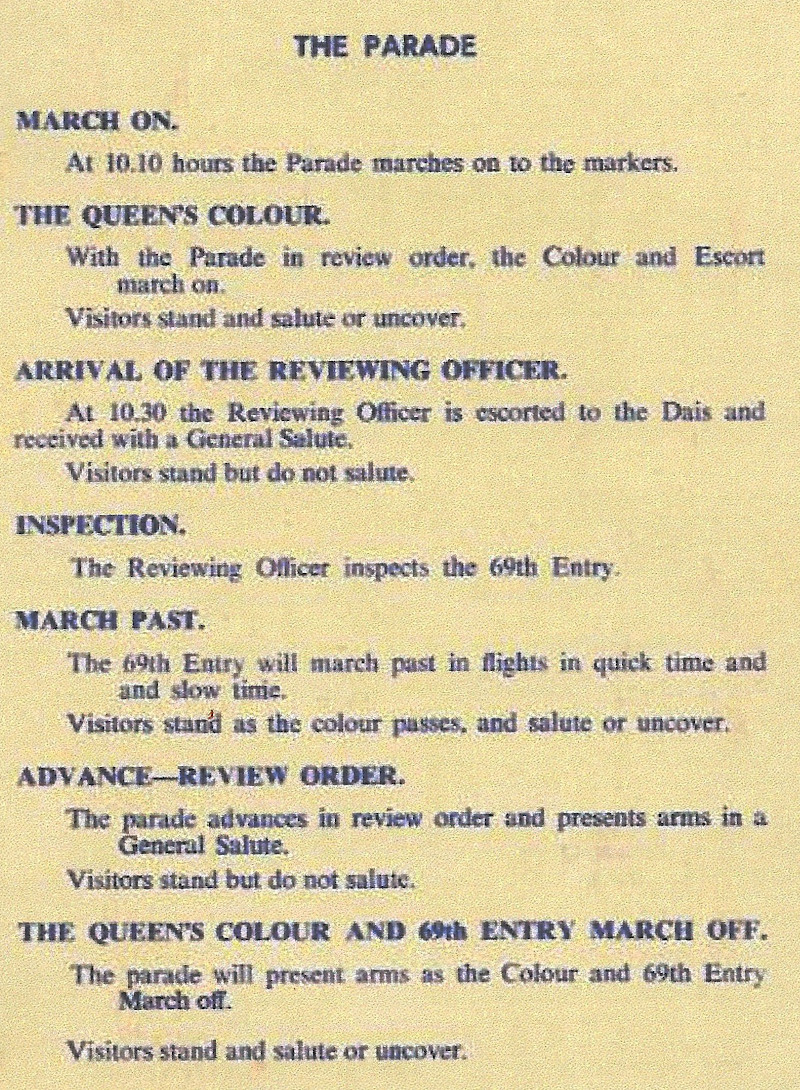 The order of the parade, July 26th 1954The Entry made above the average progress in General Service Training and their results in Ground Combat were very good.

The results in these subjects were very creditable. Great emphasis has been laid on drill and bearing, they have made very good progress and have shown unusual keenness to produce a high standard for their graduation parade.

In sport, the 69th Entry have been outstanding , and 3 Wing has won the Barrington Kennet Trophy every year since they came. This together with the record of 3 Wing in such competitions as the MacEwen, Sigrist and Scott Paine Trophies speaks for itself.

The 69th Entry have throughout provided the backbone of the Wing Teams. They have indeed, a record to be proud of, forming the basis of most of the school's teams, and have the distinction of gaining a total of 47 school colours.

Finally I would like to congratulate all those of the 69th Entry who successfully graduated. You have worked hard and are now ready to pass out into the RAF where you will still have to work hard. You take with you the very best wishes of the staff at Halton, but remember you also take with you the responsibility of maintaining the high reputation of ex-Halton Apprentices.

A full list of graduating apprentices is available here.