It wasn't RAF Halton receiving the Queen's Colour in 1952 that gave the 69th its claim to being the "Royal" entry, as it was one of several Entries in residence at the time, but the fact that it was the Entry that was chosen to represent the whole of Halton at the Coronation in 1953, lining the route along a section of Regent Street. The following is an article written in the early 1990s by Frank Sheppard of the 69th for the Wallingford Magazine, about the day:

For three years at the beginning of the 1950s I was an RAF Apprentice (RAF Halton). As all units of the services were to be represented on the Coronation, some Halton Apprentices had to be there. Critical selection - which entry could afford to miss some training - pick the tallest of this group! 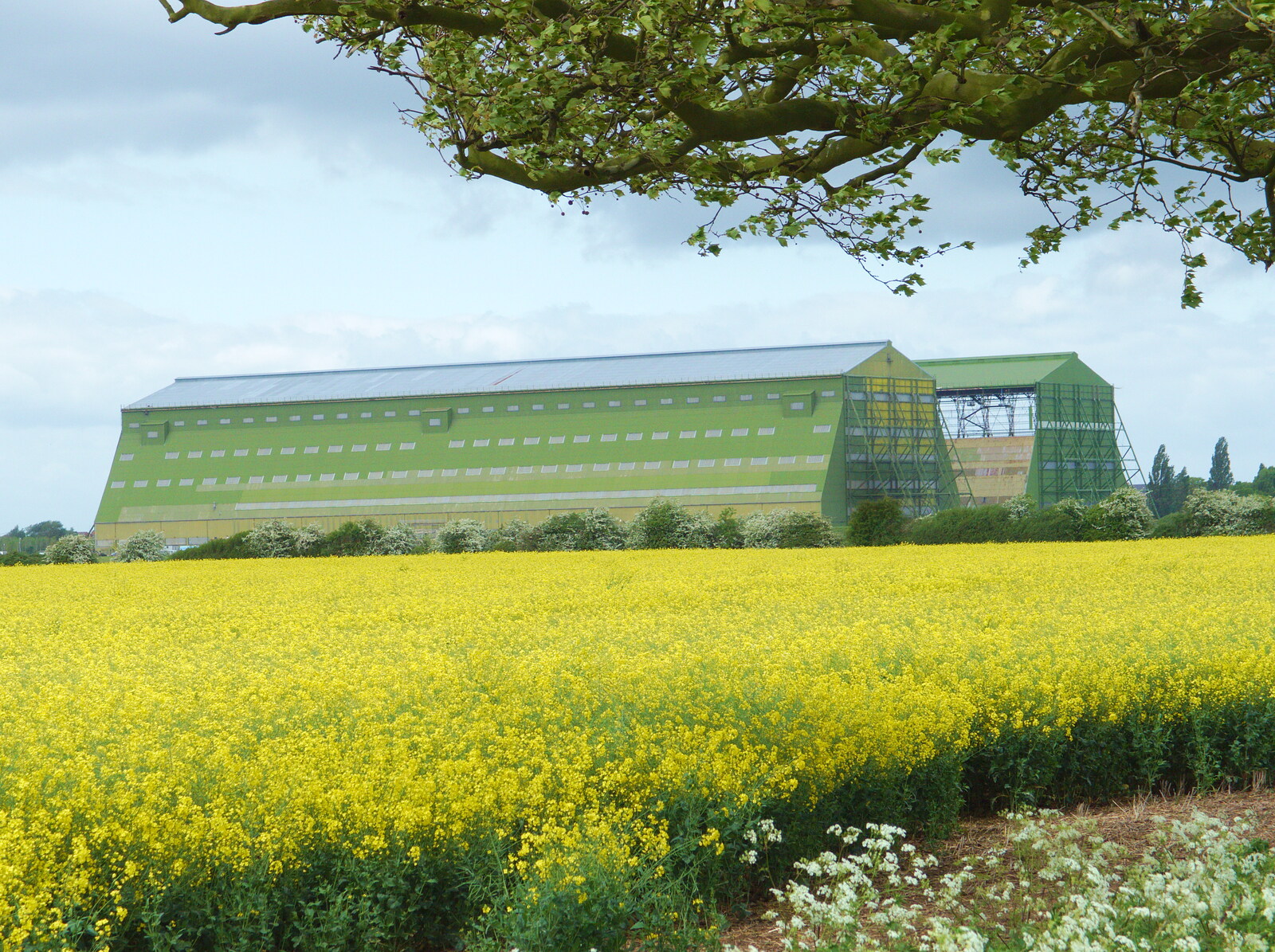 The former airship hangars at Cardington, May 2014I and about forty others, plus the Apprentice Military Band, later found ourselves 'route lining' in Regent Street. This had followed some three weeks of special training, mainly long route marches and long periods of standing to attention in the sun. The training had been carried out at RAF Halton and later at RAF Cardington (and the surrounding roads). Subsequently we travelled to London by special troop train to live under canvas in Kensington Gardens for the period immediately before and after the Coronation.

Special 'T63' uniforms had been issued to us and also white paint for our webbing - a wonderful improvement on 'blanco' - we continued to use this paint for the rest of our time as apprentices.

On Coronation Day we got up at our normal 6.30am and received our usual cooked breakfast. Then it was a leisurely start till we formed up and marched out through Hyde Park into Park Lane, past Marble Arch, down Oxford Street and finally into Regent Street. At the appropriate time we changed from 'threes' to 'twos', then divided to either side of the street before coming to a halt in front of the deep lines of spectators and the line of policemen. I think some of us felt a bit guilty being in the 'front row' when many of the people behind had either been there all night or had had very early starts that morning.

Footage of the Coronation in 1953, published by British Pathé on YouTube. The procession can be seen from around the 9'20" mark.

When the Coronation procession was passing we stood at 'attention'; when the Queen came past we 'presented arms'. It was not very onerous at all and we had a wonderful view: The day was marred by heavy rain and we were glad of our painted webbing - sailors who passed us in the procession had their faces streaked with wet 'blanco' from their hats!

After our return to Kensington Gardens, the rest of the day was ours. Many found it useful to continue to wear their uniforms that evening! I then had an evening to remember. My father was a Civil Servant with the Ministry of Supply and based in Shellmex House in the Strand, which backs onto the Thames. High up on the river side is a large balcony and from this balcony my family and I (plus another RAF Apprentice, Richard Humbly) had a marvellous view of the celebration fireworks display on the south bank of the Thames.

25 years later another fireworks display was held on the South Bank to celebrate the Queen's Silver Jubilee. The balcony was again in use - by the Queen and the Royal Family!

We understood that "Sir" got a right rollocking - but we enjoyed it!

One morning we were told we would be marching to Aylesbury and back as part of our toughening up. On the bright sunny morning when we reached the ouskirts of town we fixed bayonets, the band struck up and then we marched straight through the middle. The place stopped. We understood that "Sir" got a right rollocking - but we enjoyed it! 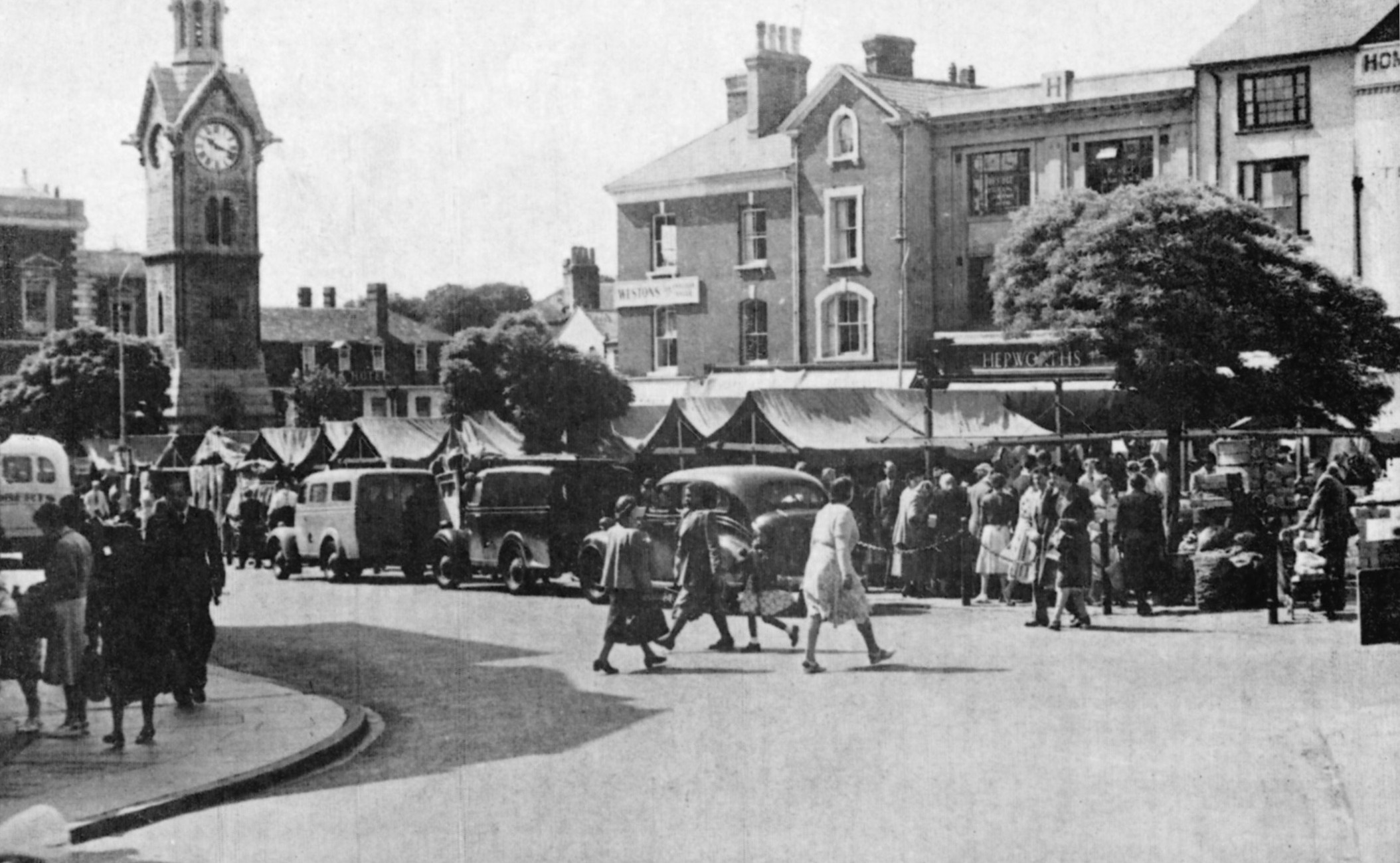 The Market Square, Aylesbury, from the Halton Magazine, May 1953

With us at Cardington were a group of 16th entry Boy Entrants also preparing for the Coronation. RAF Cardington is located alongside the main A6 read just south of Bedford; at that time it was also the RAF gasworks. Now gasworks require gasometers, and every so often they require painting. During our time at Cardington prior to the Coronation one of the gasometers, very much alongside the A6, was being given a new coat of paint. On our return from London the job had been completed - pristine. A couple of days later on the morning of our departure back to Halton, and the Boy Entrants' return to Cosford, the pristine gasometer bore the slogan "16th Entry" in very, very large letters for all the world to see. What happened to the Boy Entrants, I do not know - but our opinion of them rose!

Letter to the Editor - From Gordon Tily (Armourer, 69th)

Thanks for the memories of the Coronation (and the shortage of medals for that occasion). I don't know whether you remember when we were at Cardington but on a day when there was a large amount of scrambled egg about, we were formed up in threes and told to number off. We had a frontage of thirteen if you counted the left marker and we always took up the same positions in the flight. I was number 11 in the front row, and why, I don't know, but on the command "number', I said "Jack" instead, and instantly the others picked up with "Queen, King". There was a hush whilst our drill sergeant digested what had happened and it was only then I realised that all the top brass stood right behind us in hearing range. Yet another of the bright moments we had whilst training for the Coronation.

Another incident on the Coronation itself was when the Queen of Tonga, a very large lady, was passing us in her open-top carriage and her horse slipped on a wooden manhole cover and couldn't get going again. Using our famous Apprentice initiative, several of us grounded our rifles, rushed out and put our shoulders to the wheel to get the carriage moving again.

A less noble memory is of Flt Lt Ramsey's (I've just remembered his name) girlfriend, a Flying Officer in the WRAF. She wished to be near him that day and decided to rest her legs by sitting on the pavement kerb for a while. This relieved much of the boredom of waiting for the procession for those of us fortunate to be on the other side of the road. She was wearing white under her uniform as I remember.

The word at the time of the Coronation was that medals were to be issued to those "directly involved" with the event. However, many fewer medals were issued than there were apprentices on parade, and it was a common theme for years afterwards to question where the missing medals went.

This appeared to come to a head when in August 1999, ex-69th apprentice Tony "Perce" Parrott wrote to the the RAF's Personnel Management Agency, to query how medals were handed out. This is the reply:

Thank you for your letter of 24 Aug 1999 querying the distribution of Coronation Medals.

I am sure you will appreciate that so many people were involved in the arrangements to celebrate the Coronation that it would have been quite impossible to award the Commemorative medal to everyone. For this reason allocations of the medal were strictly regulated and as far as HM Forces were concerned, only a representative number of individuals received the award.

The medals allocated to the Royal Air Force were distributed to the various units and awarded at the discretion of the Commanding Officers. It is quite possible that many of the Apprentices lining the route of the Coronation did not figure amongst the "fortunate Few" who received a medal. You are also advised that the Central Chancery have ruled that this medal cannot be awarded retrospectively.

I am sorry to send what must be a disappointing reply but trust this clarifies the matter.

This response was then discussed in the February 2000 newsletter, No. 25:

Your editor was amongst those who were on the Coronation - taken off normal Halton training in order to smarten up our drill, learn some new items, and to do things such as marching to Aylesbury and back. Then it was off to RAF Cardington and finally to Kensington Gardens. During this training there was much talk of the medal that was going to be issued to those "directly involved with the Coronation".

So we did our route-lining in Regent Street, pretty smart I recall, and then back to Halton via Cardington.

But where did the medals end up?

Coronation medals arrived at Halton; how were they distributed? I believe that enough came for one each for the Apprentice military band and all the route liners and our two NCOs and Officer. But where did the medals end up?

All the apprentices in the band, TWO to the "route liners", one each to Sqdn Ldrs and above and a few to selected civilians. We heard that no medal was given the civilian Bandmaster but when an objection was put in a medal was hastily withdrawn from the civilian swimming bath attendant.

It would be very interesting to know: