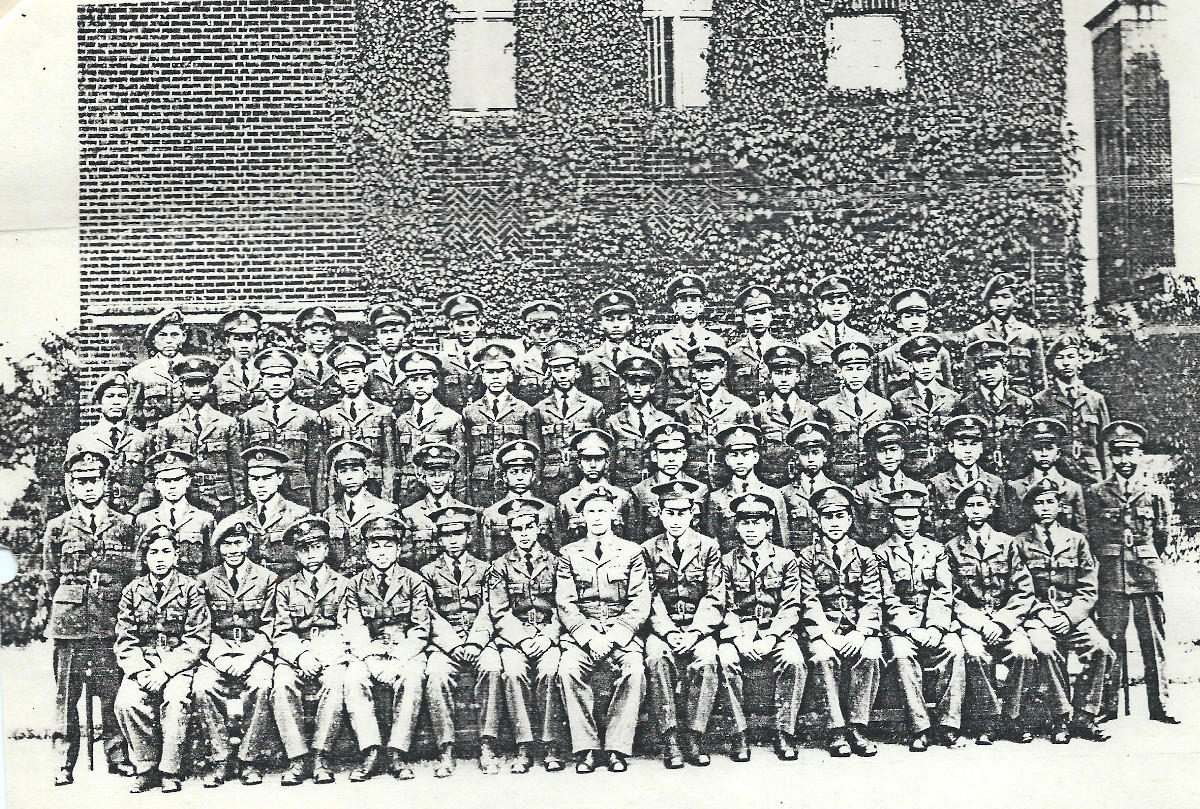 This photo shows the Burmese contingent of the 69th and 75th Entries at RAF Halton, assembled in front of the No. 3 A Wing Dining Hall/Mess. In the centre of the front row is the RAF liason officer, Flight Lieutenant Bishop.

Khin Myint, one of the 69th Burmese Brats (seated fourth from the left on the second row from the back) wrote about the group's sporting prowess: "Most of us played football. I was the only Burmese Aircraft Apprentice to fly glider up to the solo stage. Ba Han was good in Judo. Outstanding Burmese boxers were A. W. King, Charlie Turner, Aung Than and Kyaw Khin Gyi. They all represented the station".

The 69th in Burma

On the 15th March 2004, 69th Entry ex-apprentice Tony Parrott and his partner May undertook a visit to Burma. There they met five of the Burmese 69th Brats - Ben Minus, Hla Thwin, Khin Myint (also featured above), Htoon Thein and Maung Ni, pictured below right. Below is Tony's report on the visit. 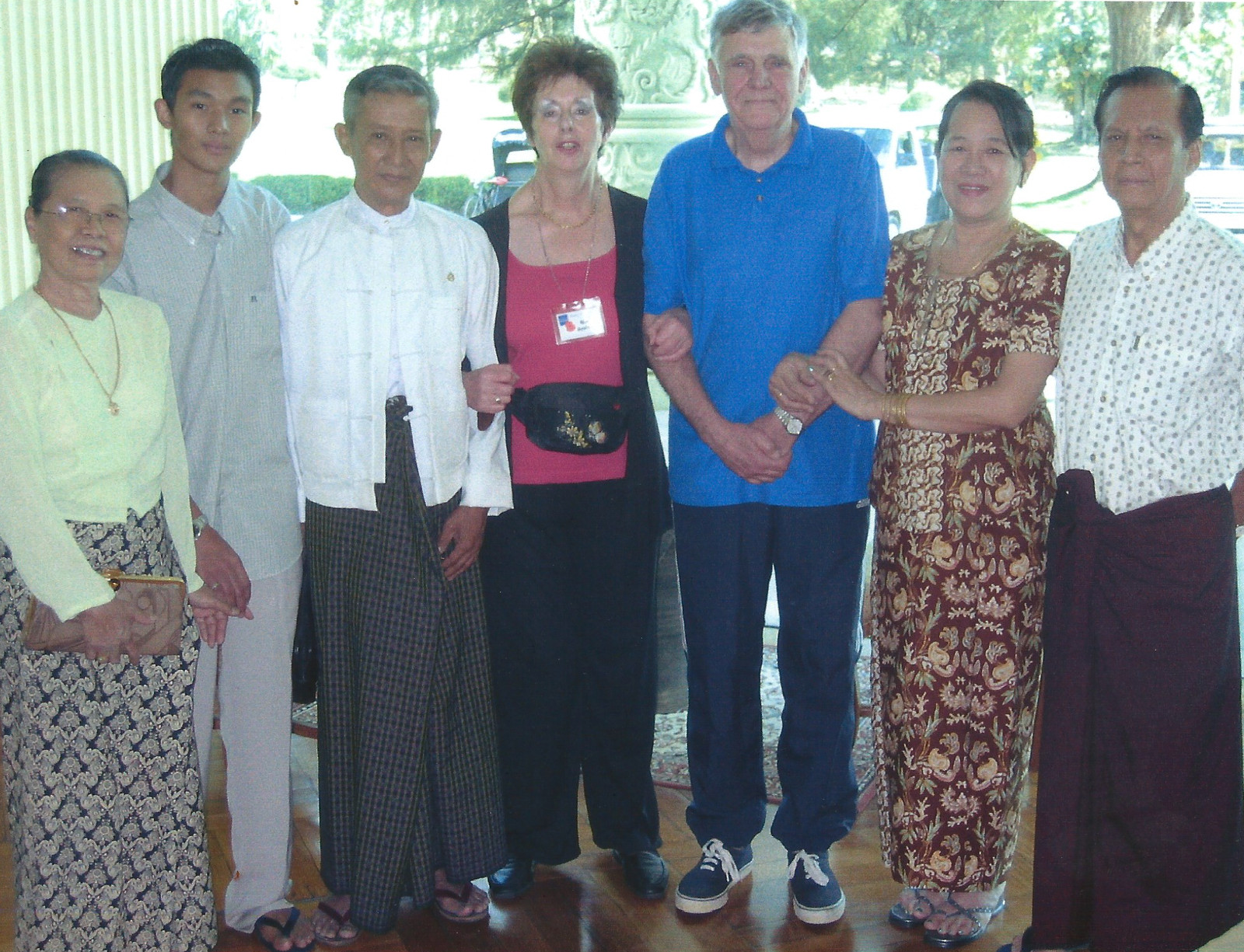 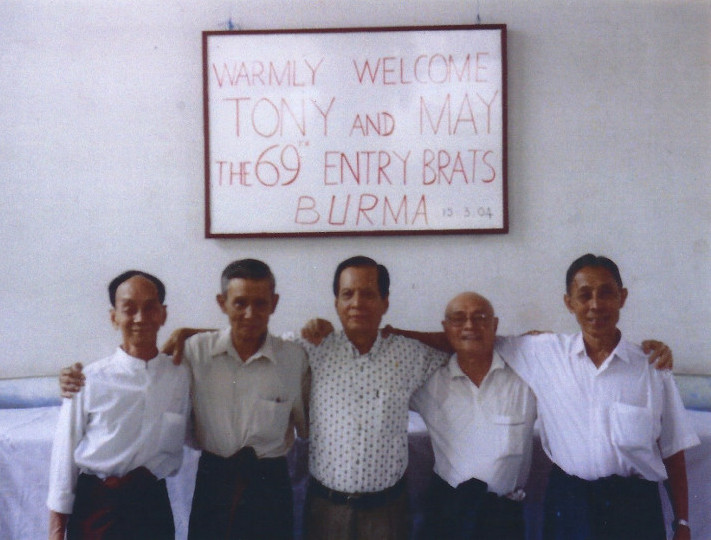 With May, I visited Burma (now called Myanmar) on a British Legion package trip during March. We travelled to Rangoon (now called Yangon) via Bangkok as there are no direct services from the UK.

There was of course the conundrum - would I assist their government by going, or would it be better to visit, ascertain the truth, and return with information about the current situation. I chose the latter.

Our group departing from Heathrow consisted of our guide, Colonel Piers Stone-Pugh, plus 13 others, six of which were ex Chindits [special operations units]. Later we collected two Americans in Bangkok, with two Australians and one from Brunei joining us in Rangoon. This made a total party of nineteen.

On arriving in Rangoon we were transferred to the Inya Lake Hotel which was modern and of a high standard. As I had previously informed our 69th Burmese friends of our itinerary, within an hour of our arrival, and 50 years since passout, we were welcomed by some of the 69th Burmese and their wives. It was a moving experience. We were due to fly to Mandalay the next day, so the meeting ended after a few hours with a promise that we would see them again on our return to the hotel.

Following our eight day trip up country to Mandalay, and to various places significant to ex-Chindits, we returned to our hotel in Rangoon. The following day we were able to have lunch with some of the 69ers.

During the visit we met Khin Myint (electical), Maung Ni (instruments), Hla Thwin (airframe) and their wives. We also met Ben Minus (airframe), Htoon (electrical), Ko Ko Gyi (electrical). Additionally we met a friend of theirs, ex Burmese Air Force, who we made an honorary 69er. I was presented with a Longi - a long kilt - which I was told must be worn minus items similar to Scottish kilt wearers!

All of them were pleased and grateful to hear that Khin Myint had been made "The Benevolent RAF Halton Aircraft Apprentices Member for Burma", courtesy of Deputy Chairman Group Captain Min Larkin. They will now receive magazines and news regarding ex apprentices throughout the world. They have not been forgotten.

Just prior to our departure at the airport, I met an ex 75th Burmese who asked "Can we organise a trip from UK to Burma for 69ers and 75th lads? Any takers?

From Burma to Halton

The following appeared in the Halton Magazine February 1952 and was written by A/A Bahan, 69th entry.

I cannot dismiss 22nd August 1951 from my memory as it was the date on which we left Burma to undergo our apprenticeship at Halton. The following afternoon, Rangoon Airport was crowded with our friends and relations. Across the airfield stood the BOAC aircraft waiting to start her flight. Minute by minute the crowd grew thicker until there were no empty places and we were very busy saying goodbye to everyone.

We had mixed feelings, happiness at having the chance to visit Britain whilst undergoing training, sorrow at the separation from our friends for three long years. In front of the airport we had our photograph taken with The Chief of Staff of the Burmese Air Force along with his wife and some officers. We could see the crowd waving goodbye and good luck as we boarded the plane. Gently the engines started and within a few seconds the plane slowly left the airport. Across the runway we again saw the crowd waving their hands and gazing towards us with eagerness. Quickly the runway dropped behind us and we pointed towards the clouds.

We flew at 230mph at 1700ft altitude and the 5 hour flight to Calcutta was shown on a chart. At four-o-clock we had our tea on the plane. We stopped at Calcutta for refuelling and then flew on to Karachi. This flight took 6 hours and we stopped for 2 hours at Karachi. Next we reached Basrah and then Rome where we had our tea whilst the plane was refuelled. By then we were over 6000 miles away from our country and the local time was five and a half hours different. From Rome we made a non-stop flight to England.

We reached London Airport safe and sound at eight-o-clock in the evening. The warm and moderate weather of Britain was very pleasant to us after the extreme cold. Before coming to Halton we spent three happy days in London looking round the museums and exhibitions. We were fortunate to arrive during the Festival of Britain and we enjoyed going to the Pleasure Gardens and later on the South Bank Exhibition. The memory of watching The Skylon' springs to my mind and still makes me happy. On the 26 August 1951, we took a trip to Halton. We were well aquainted with it through the Halton magazine which we had read in Burma.

Now we have all reached and settled down in our respective Wings and I live in Block 14, "B" Squadron, No 1 Wing undergoing the Basic Fitter Course in workshops. Halton is set in beautiful countryside with the background scenery of the Chiltern Hills. We can see that Halton is producing not only skilled men but fine sportsmen. The Halton Society too is greatly in evidence with its many clubs. I am very happy here, and we are all hoping to enjoy our stay.

Burmese apprentice Philip Barnard of the 69th wrote about his escape from Burma in an article which appeared in the Summer 2009 Haltonian.

After passing out from Halton I returned to Burma and was posted to Myitkyina, a remote township in Upper Burma where a squadron of Vampires was stationed. Early one morning in 1962 as the sun tried to break through the heavy fog that shrouded the mountain chain bordering Burma and China, I seemed to sense something ominous in the air.

My intuition was confirmed later that morning when a red alert was issued and all ranks had to assemble in the hangar. No one knew what to expect but there were rumours that a 'coup d'etat' had taken place in Rangoon (now Yangon). When the Commandant arrived, the rumour became fact and he said that it had occurred without bloodshed and that the Prime Minister, U Nu, and his cabinet were under house arrest.

He said that the army had no choice but to sieze power because government policies and directions were not in tune with the wishes of the people. He added that the 'Junta's' aim was to redirect the country towards the "Burmese way to Socialism". In short it meant nationalisation of private enterprises and land distribution for most farmers. I thought it sounded like doom and gloom for the economy.

Though Burma was known as the rice bowl of South East Asia, there were soon signs of food shortages and rationing soon became the norm. Identity cards were swiftly brought in for everyone. These dramatic measures caused a mass exodus of foreigners and even nationals from the country. Cadres were sent to towns, villages and hamlets to implement the regime's ideology. Democracy had come to an impasse and Burma was now truly a one party state.

In the midst of this turmoil, I was posted to Meiktila, a flying and technical training school in central Burma as a Technical Instructor on the Vampire. As weeks turned to months I was desperate to get out so, in early 1964 I plucked up enough to see the Base Commandant, Col Soew Hlaing, and request a discharge on the compassionate grounds that half my family were already in the UK and I wished to join them. Although he was non-commital, there was a genuine sign of empathy and, although I had put him in some predicament, the outcome was positive. After a few months I heard that my release was to be granted.

Clearing quickly from the base I headed for Rangoon to arrange my passport and visa. Bureaucratic obstacles made this difficult but eventually with the aid of friends I got a 'Certificate of Identity', a one-way stateless document in lieu of a passport. The British Embassy was kind enough to grant an entry visa to the UK. ecause of my family ties there.

Armed with these documents and the £100 maximum I was allowed to take from the country I boarded a BOAC flight to London in September 1965. The flight was as dramatic as my exit for we were refused entry to Indian airspace due to fighting between India and Pakistan. This meant a return to Mingladon but the next day we got away and soon I was being met at Heathrow by my sisters.

A visit to the Home Office secured me a permit to work and I found employment with British Eagle working on Britannias until the company folded in 1968. Next came a job with Faireys in their helicopter experimental department. In 1969 BOAC were recruiting in order to service their forthcoming Boeing 747's and after a successful interview I joined them the same year. Whilst there I decided for naturalisation. I was helped by my father and his friends who submitted that our family had served the Crown for three generations, my great-grandfather was a Lieutenant in the Indian Army, my grandfather a Commissioner in the Burma Frontier Service and was awarded the CBE and CIE, whilst my father won the Military Cross in the Far East theatre during WW2. By adding my potential usefulness to the aircraft industry my application was considered worthy enough and I became a naturalised citizen in 1972. After a long spell as a licensed aircraft engineer, I brought my working life to a close of my own volition in 1995 and my long journey from Myamnmar (Burma) to the UK came to an end. All's well that ends well.