An introduction to the Aircraft Apprentices Scheme at Halton 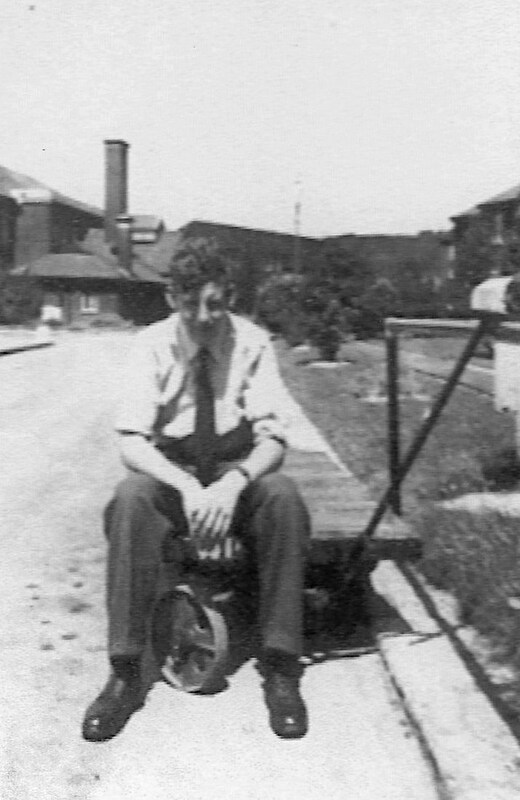 An apprentice of the 69th at RAF HaltonFollowing the end of the first world war in November 1918, Chief of Air Staff Hugh Trenchard, in his considerations for the founding of a peacetime Royal Air Force, had recognised the need to train a wide variety of engineering trades, especially those connected with aircraft maintenance.

The Aircraft Apprentices Scheme, included in Trenchard's paper, which outlined his rationale for a substantive peacetime Royal Air Force, was endorsed by Winston Churchill - the then Secretary of State for Air - and was issued as a white paper entitled 'An outline of the Scheme for Permanent Organisation of the Royal Air Force', dated 11th December 1919. This was placed before Parliament and accepted.

The first qualifying examinations for entry into the RAF as Aircraft Apprentices were held in London and 14 provincial centres in November 1919, and set the pattern whereby future aspiring boys of between 15½ and 17¼ years of age would gain entry, with selective examinations to take place twice annually.

Successful candidates reported to No. 1 School of Technical Training, formed at RAF Halton in December 1919, in the succeeding January or August. Entries were numbered sequentially and would be the first question asked by one apprentice to another "what Entry were you?". Trenchard's vision was for the recruitment of well-educated boys because he anticipated that they would go on to form 60% of the RAF skilled tradesmen. 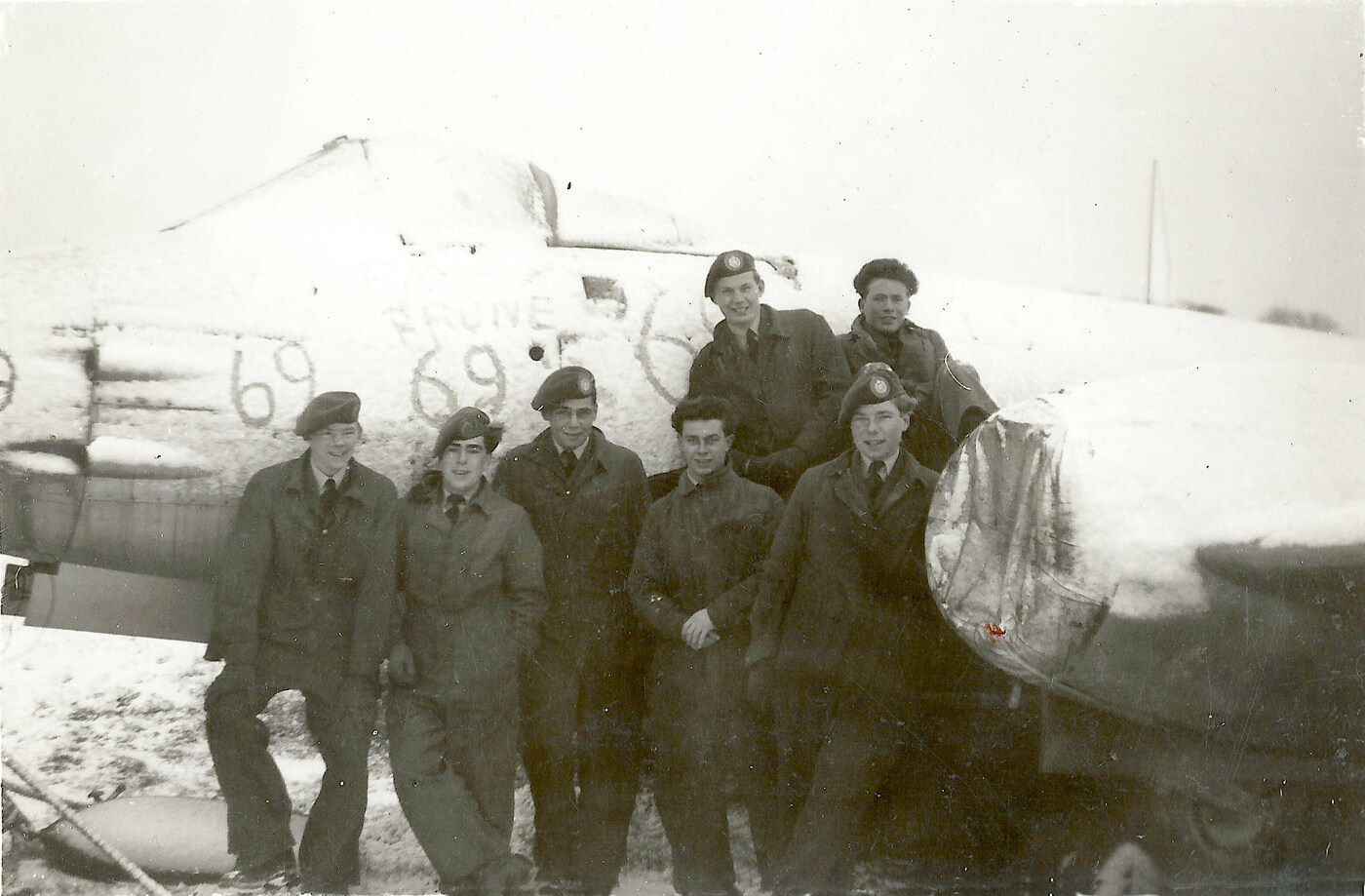 Apprentices of the 69th, including Nosher's old man (bottom right) in front of a Gloster Meteor at Halton. The lads would occasionally set the guns up and fire them at sand butts 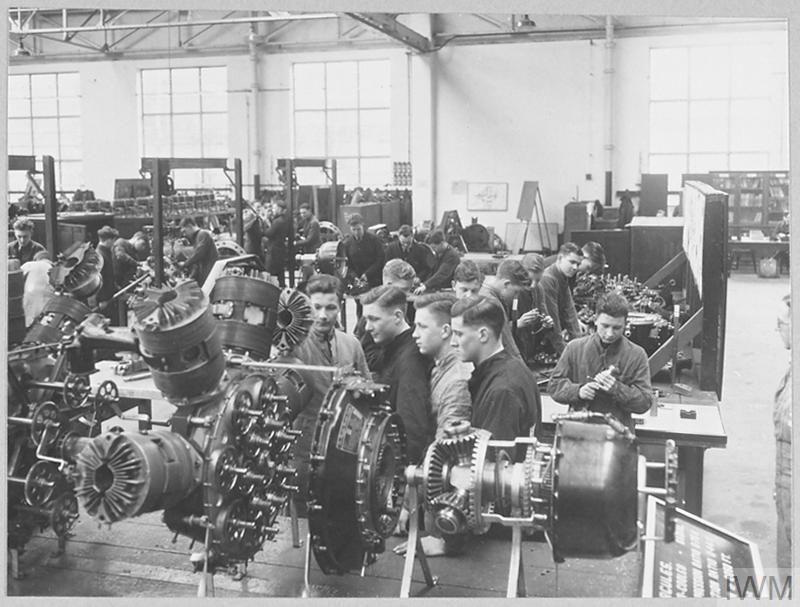 The examinations were set to test the candidate's resourcefulness and intelligence and thus [candidates] needed to be able to absorb the necessary technical training to complete their apprenticeship in three years rather than the normal five years current in civil life, with a considerable saving in cost.

The first entry numbering 235 boys were accepted for three-year apprenticeships in January 1920 and began training at Cranwell, as accommodation at Halton had not been completed. The move to Halton coincided with the 5th Entry in January 1922 when the rank of Aircraft Apprentice was adopted rather than the earlier title of Boy Mechanic. In May 1922 NCO Apprentice ranks were introduced.

Entries of Apprentices continued at a rate of two per year, with the exception of 1941, when there was only one - the 43rd in August - until 1946 when three intakes a year became the norm, until 1964 when it reverted to two. 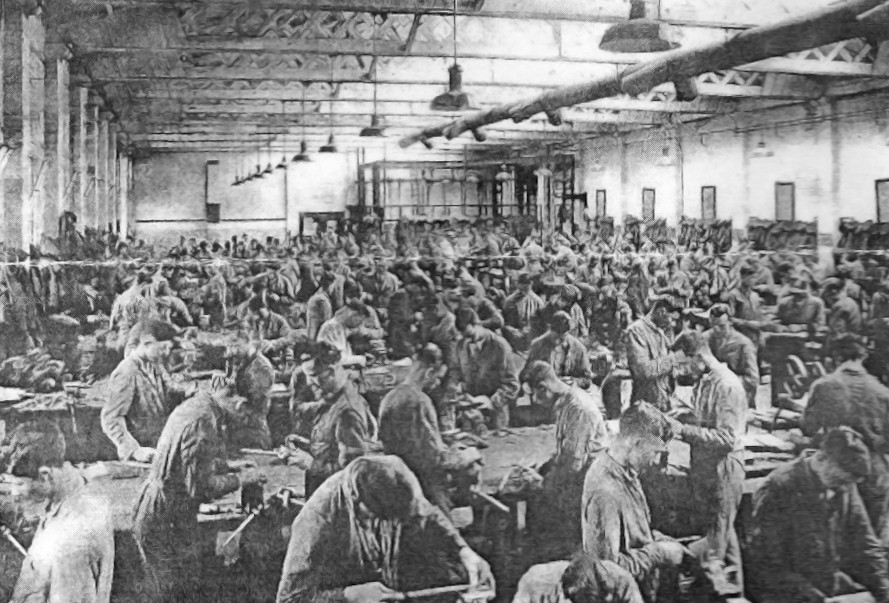 During the early 1930's entry sizes had dwindled from around 500 per entry to 166 in January 1932 (the 25th Entry), but with the expansion of the Royal Air Force in anticipation of the Second World War and the need for a vastly increased number of improved-technology aircraft, and technicians to maintain them, aircraft apprentice entry sizes increased substantially, peaking at 1,378 entrants in August 1939 (the 40th Entry). During wartime, Aircraft Apprentices were still required to pass the entrance examination, but entry sizes were down to about 250 from August 1940 (42nd Entry). 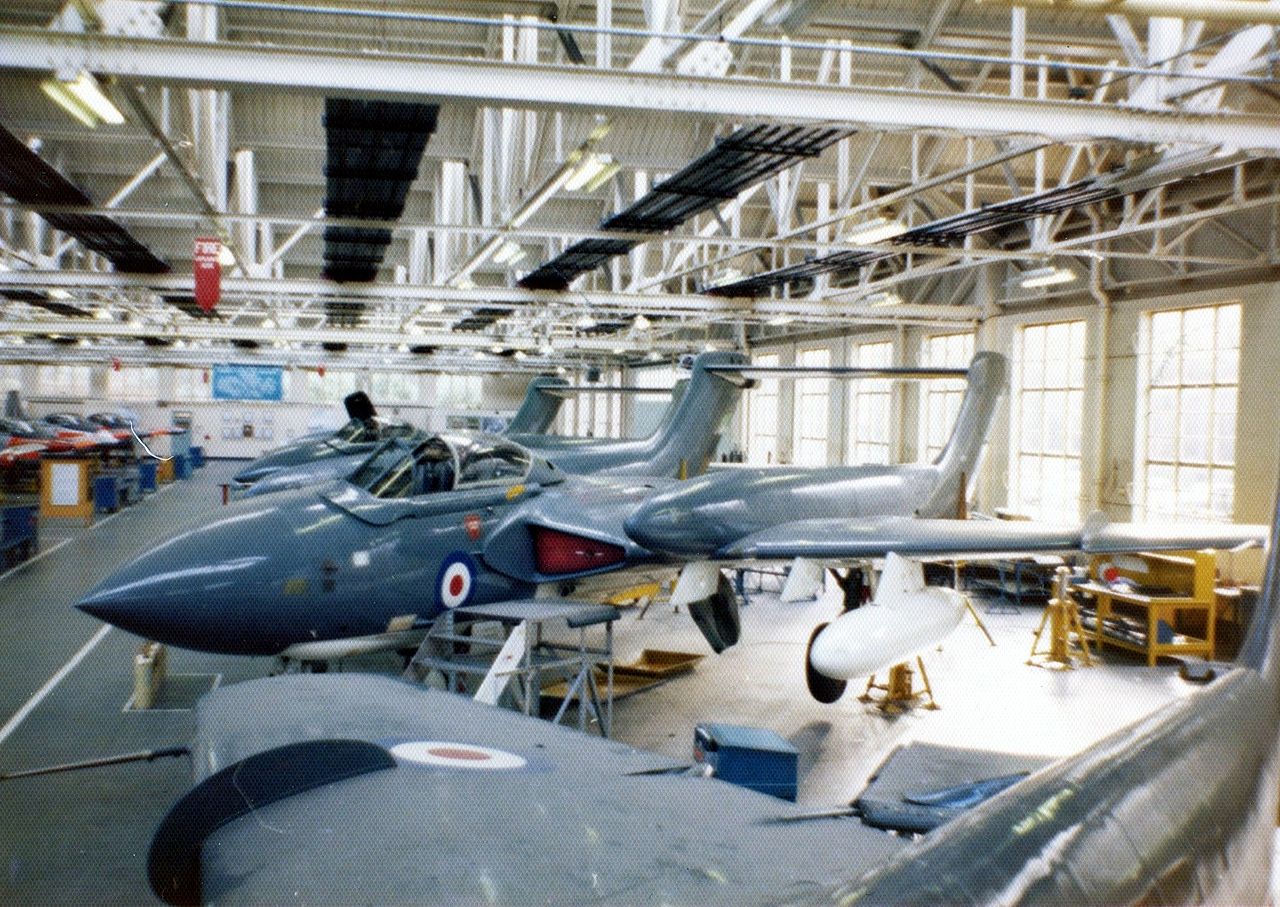 Sea Vixen FAW 2's in RAF Halton's New Workshops, around 1977. Photo contributed to the public domain by Pete ButtThe introduction of a revised RAF trade structure and a policy of aircraft maintenance by replacement rather than repair, brought with it in 1964 a reversion to two entries a year and the introduction of two stream apprentices — Technician Apprentices, who continued the existing apprentice entry numerical sequence and the three year course, and Craft Apprentices, who were numbered in a 200 series and carried out a two year course.

By the mid 1980's recruitment of sufficient Apprentices to meet RAF needs was becoming ever more difficult. Apprentice entry sizes were down to less than 100 and by May 1990 (155th entry) they were down to 46. The 155th became the final Entry graduating in June 1993.

"The aim of Apprentice Training is to produce completely reliable airmen and skilled craftsmen, of sound character, of balanced judgment, of good education, with a high sense of responsibility, power of leadership, and pride of Service; to provide a body of men from which future N.C.Os. and Officers may be selected."

The Apprentice Scheme in the Royal Air Force

The following information on potential careers in the RAF and the requirements expected of apprentices appeared in the Halton Magazine for a few years from 1951, the year the 69th Entry commenced and when the trade structure of the apprentice scheme changed again. Four trade groups are mentioned - Aircraft Engineering, Radio Engineering, Armament Engineering and Electrical & Instrument Engineering, however the second of these - Radio - was not taught at Halton but was instead hosted at No. 1 Radio School at RAF Locking, near Weston-super-Mare.

Of the 40,000 boys trained under the scheme since it started, over 10,000 were commissioned, 110 attained Air Rank (Air Commodore and up) and 116 fought as pilots in the Battle of Britain.

On joining the Royal Air Force, the Apprentice is attested for a period of regular Service terminating on the expiration of 12 years reckoned from the date of attaining 18 years of age. Under its new Trade Structure, the Royal Air Force in fact offers pensionable employment up to the age of 55 to all airmen who are up to the required standard. Airmen who complete 22 years' Regular Service also qualify for a pension.

The period of training for a Royal Air Force Apprentice is normally three years. The training includes a progressive and carefully designed course in General Education with emphasis on those subjects which are essential to the Apprentice's future career. Depending on his record of progress and results in the final examination, the Apprentice may qualify for the Ordinary National Certificate in Mechanical or Electrical Engineering.

On successful completion of their Apprenticeship, Apprentices are posted in the rank of Junior Technician to selected units. As Junior Technicians, they are eligible for promotion to non-commissioned and then to Warrant Officer rank. Alternatively, they may take up the new technician career in which they may be promoted up to the rank of Chief Technician, according to their skill and experience as tradesmen. Those who have completed Royal Air Force Apprenticeship are expected to reach the higher ranks in the Royal Air Force including commissioned rank.

Apprentice candidates must have received a good general education and be in good health and of sound constitution. They must normally be between 15 and 17 years of age on the first day of the month of entry. 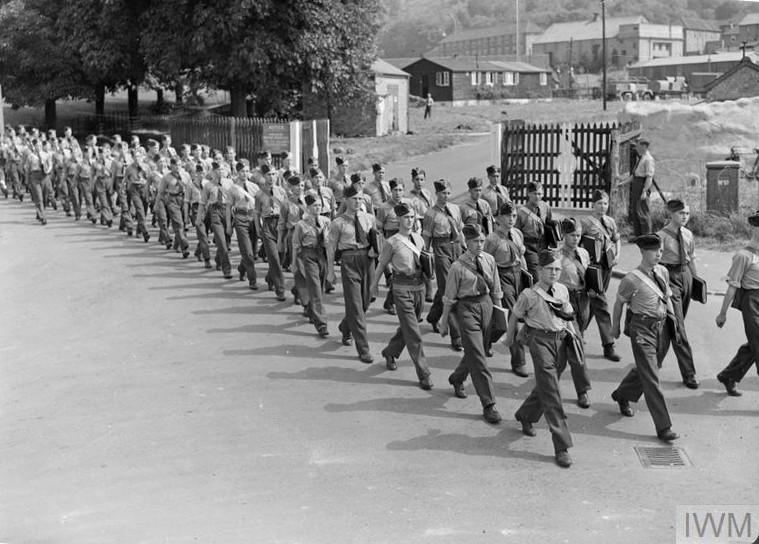 Aircraft apprentices march in shirt-sleeve order from their living quarters to the workshops at No. 1 School of Technical Training, Halton, Buckinghamshire, to begin their day's work, circa 1945. Source: IWM © IWM (CH 1018)

Trenchard's plan for the Apprentice Scheme was to take boys already educated to a good standard, so getting in to Halton required, at least by the 50s and 60s, that the entrant had already passed at least four 'O' Level examinations. There was then an entrance examination, held in London and at various places around the provinces, which, if successful, would lead to an offer.

Getting an A-grade pass at the end of the three years would lead to the awarding of an Ordinary National Certificate in Electrical or Mechanical Engineering, whilst an A- or a B-grade pass was sufficient to be considered for Commissioning into the RAF.

Halton apprentices would go on to form 40% of all ground crews, and over 60% of all the skilled tradesmen in the RAF, whilst some 20% would end up being commissioned, with over 100 attaining Air Rank. According to Group Captain Min Larkin, Halton's archivist and historian, Halton's merit-based entry and the chance to earn a commission as a result of it was an example of "outstanding social mobility, uncommon for the time".

This is the text of an offer letter sent to one of the 69th's would-be apprentices in 1951.

I am pleased to inform you that your son, Frank, has been accepted for entry into the Royal Air Force as an Aircraft Apprentice.

As a result of his examination by the R.A.F. Selection Board at Halton on the 27th July, 1951, he has been selected for training in the Aircraft Engineering Trade Group.

The Apprenticeship covers a period of three years, beginning at Halton on the 28th August, 1951. At the Apprentice School excellent facilities are provided for general education as well as for technical training in the most highly skilled trades of the Royal Air Force. Your son will be trained, initially, in one of the aircraft engineering trades and he will have every opportunity, during his apprenticeship, of fitting himself for a very fine career in the Service. "If he applies himself with zeal and makes the most of his opportunities, the way is open for him to rise to a high position."

I am writing this personal letter to you because I am sure that you would like to have early information of your son's success in obtaining a vacancy.

Reporting instructions and a railway warrant for your son's journey to Halton will shortly be forwarded to you by the Air Officer Commanding the R.A.F. Record Office.

May I congratulate you and your son on his success and extend a welcome to him on joining the Aircraft Apprentice School in my Command.