RAF Halton and Lewis the Goat(s)

Several of the photos of Halton around the 1940s and 1950s show a mascot goat walking alongside one or other of the Halton bands. This was "Aircraftman Second Class" Lewis (or more correctly LEWIS), however there were different Lewises right up to the last - Lewises VI and VII, who both retired in 1993 with the closing of the Apprentices Scheme. A "Band Notes" article in the June 1952 Halton Magazine provides some caprine background: 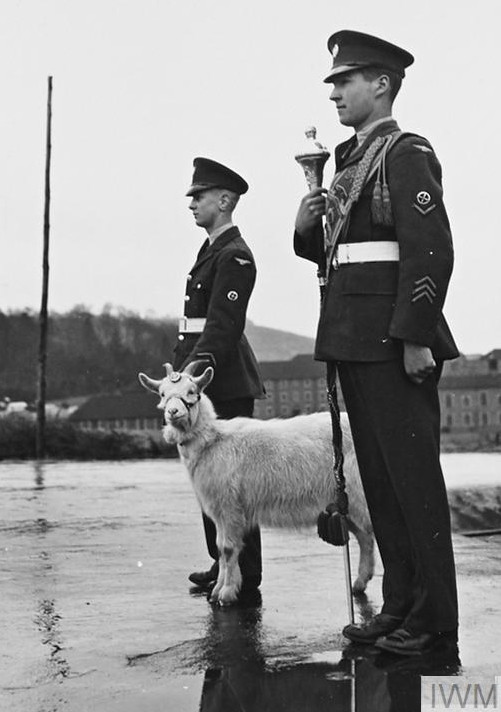 Lewis I on parade at Halton, source: IWM © CH 16407No doubt, many apprentices would be interested to know a little about Lewis I and II?

Lewis I is a short-haired white Welsh mountain goat. His name is derived from the initial letters of London, England, Wales, Ireland and Scotland. He was a kid of the famous mascot of the Royal Welsh Fusiliers, born in January 1944, and posted to Halton when his regiment went overseas in June 1944.

Warrant Officer Carlton, who needs no introduction, was responsible for training Lewis I, who appeared on all ceremonial parades clad in a red cloth coat trimmed with gold lace, and wearing "wings" and medals.

His medals comprise the Defence Medal, War Service Medal and the Allied Forces Medal of the Mascot Club, all of which were presented for outstanding performances on ceremonial occasions.

During his four years' active service, Lewis I's conduct was not always exemplary. Many times he expressed disgust with Band members by chasing and butting them. It is alleged that on one occasion he charged the President of the Bands Committee!

He was retired because of "operationally tired" feet in October 1947, and now browses peacefully at the Ilford Sanatorium of the People's Dispensary for Sick Animals.

In the spirited times of Victory and other Parades Lewis I gained rapid and generous promotion to the rank of Flight Sergeant but never changed his religion - Druid — or his number - 295!

Lewis I, the goat, gets measured up for a bowler hat for his demob pass-out ceremony at RAF Halton in 1948

A.C.II Lewis II was born on St. Patrick's Day, March 17th, 1947, and presented to the Pipe Band by Mrs Liddington, a local resident. His religion is R.C., and number 252. He is a common white Welsh goat without the military background of his illustrious predecessor.

He has given good service to date, though, despite the improved opportunities afforded by the New Trade Structure, he remains A.C.II. Recently, his right foreleg has given him trouble and, despite attention from the local veterinary surgeon, he persists in "carrying" it, though Warrant Officer Carlton claims to have seen him putting his weight on it whilst rubbing his head with the other foreleg! It will be interesting to see if Lewis II takes a firm stand against Lewis I deputising for him on the 62nd Entry's graduation parade!

By the summer of 1952, Lewis III had take over. This short passage from the souvenir brochure for Halton's 1952 Battle of Britain memorial open day explains:

A/A Lewis III, Goat mascot of R.A.F., Halton Pipe Band, was born on 12th May, 1952, enlisted into the R.A.F. on 7th July, 1952, was received at No. 1 Goat Receiving Centre on the same day, and passed out of preliminary training 25th July, 1952, on the occasion of the Presentation of the Queen's Colour, with 86.7%. He is fully documented as for A/As and received World-wide Publicity as "Just the Kid for the RAF". Bad habits nil, but has a fierce appetite for cigarette ends and Sick Reports.

Lewis III died on the 14th February 1957, with his death being reported in the Spring edition of that year's Halton Magazine

The death occured during the afternoon of 14th February, of Lewis the goat, for four years mascot of the Halton Apprentices. He was the victim of an internal ailment.

Lewis came to Halton when he was a kid goat less than a year old. His first big parade was the occasion of the presentation of the Colour by Her Majesty the Queen. Lewis on this parade distinguished himself by sitting down: he was not at that time trained to that degree of dignity which we came to take for granted in more recent times.

His death was sudden. On Wednesday, February 13th , he appeared to be perfectly healthy. There was nothing in his appearance to alarm his keepers. By Thursday morning, however, he had become sickly and during the afternoon he died.

Lewis was buried in the plot of land opposite the No. 1 Block 3(A) Wing. The grave is to be provided with a memorial plaque. 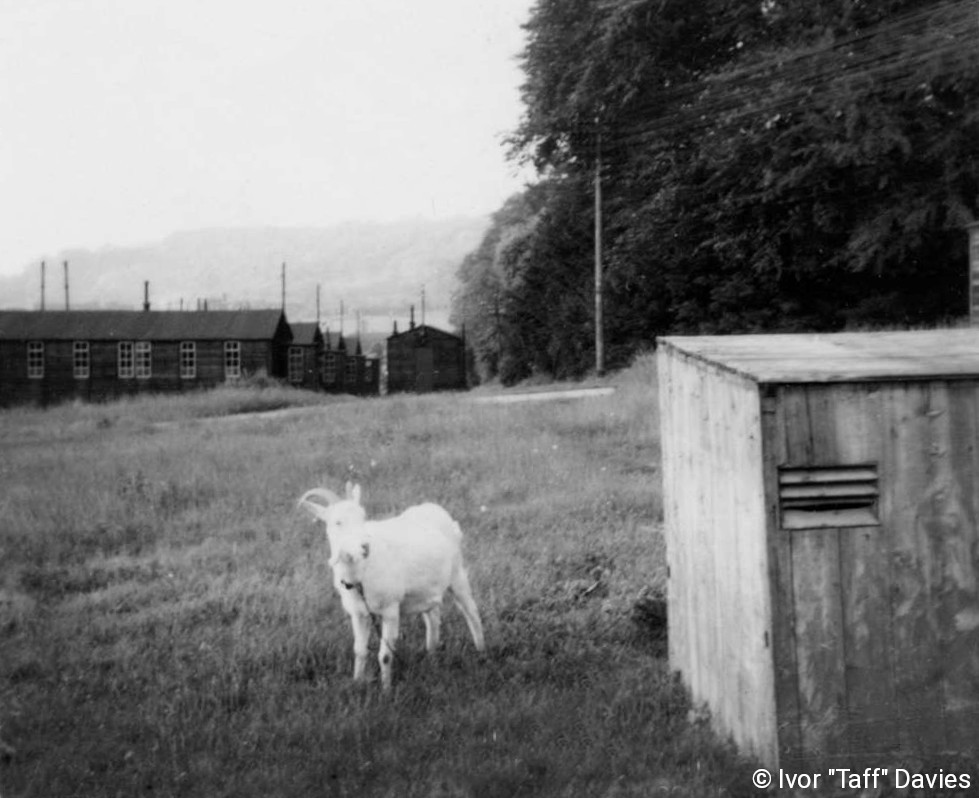