The 69th Entry reunion in 2007 was timed to coincide with the three-yearly reunion of the RAF Aircraft Apprentices Association (RAFAAA), at RAF Halton, near Wendover in Buckinghamshire. The following text comes from a report which featured in the 69th's newsletter of November 2007, issue 58. 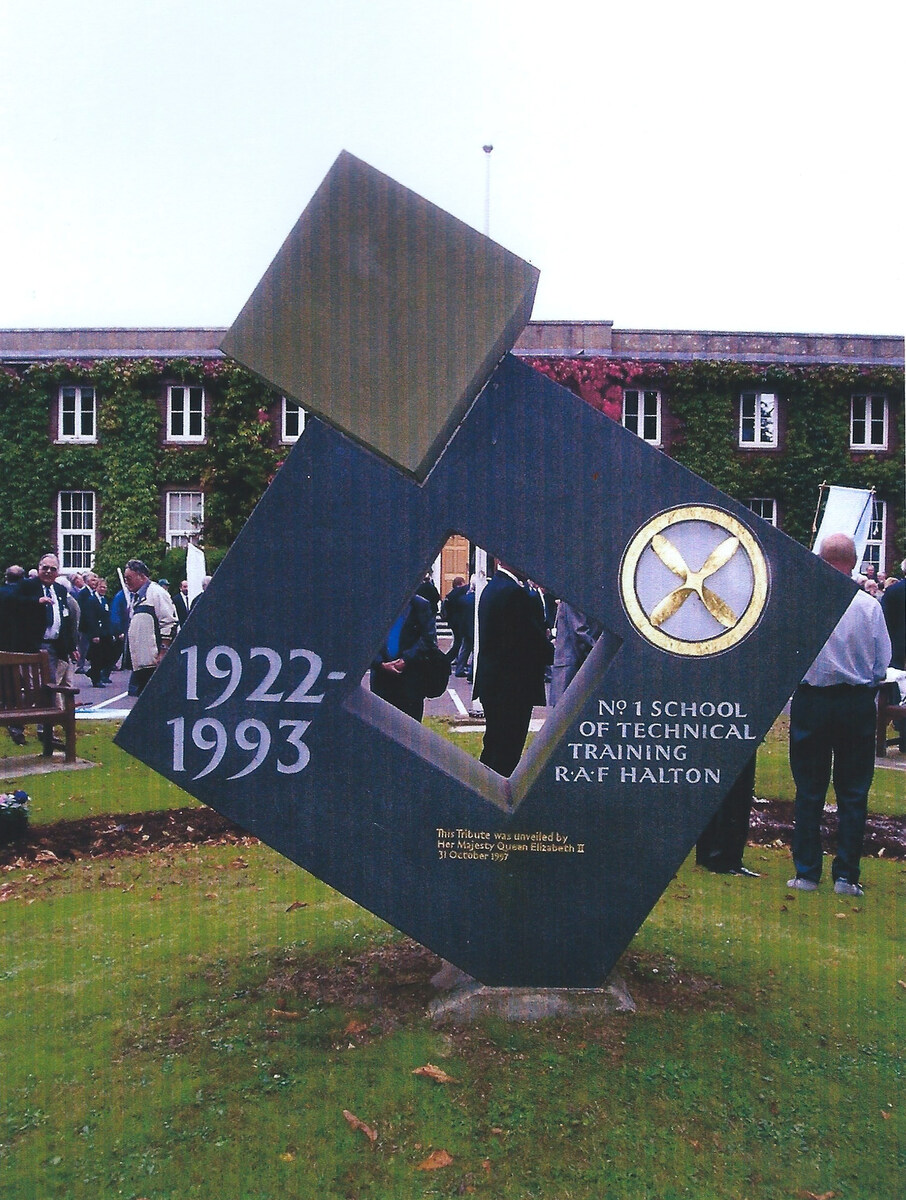 A tribute to the apprentices of the No. 1 School of Technical Training, 1922-1993, at RAF HaltonOnce again I was paying for the privilege of reliving those agonising days 56 years ago when you came abruptly face to face with enormous queues for one egg or one rasher or worse still - a kipper! And the new experience of waking up in mid-air when the Senior Entry (I've given them capital letters in case they might get to read this) decided to rotate your bed through 90 - 180 degrees, or when some shaven-headed 'gentleman' attempted to puncture your eardrum from 5 centimetres away!

I arrived at about 18:00, walked to the guardroom from the car park - and back - what was the bloody registration number of my car? And what a lovely surprise when I was greeted by "Hello Sir - Mr Gosling" by a young West Indian lad (fastest lad over 100m I ever coached) who I had taught some 20 years ago - small world.

Yet another surprise at the barrack block - my own bunk! (never managed that at Halton) AND a duvet - but I had to put the cover on it - something I am not familiar with. Later, a pleasant curry (score 7/10) in the smart new mess then to tread the hallowed ground I had never trod before - Halton House. Eventually I managed to thump the digits on the worn-out code lock and treated myself to a beer. Several at the bar were saying they had trouble with the digits - Roman numerals - I think they were Airframes! I was very impressed with the house, but what a waste as the Officers' Mess when it would have been much more appreciated as a Corporals' Mess. Couldn't bring myself to sit in the CO's Chair - jankers was bad enough at 16, couldn't face it at 73! 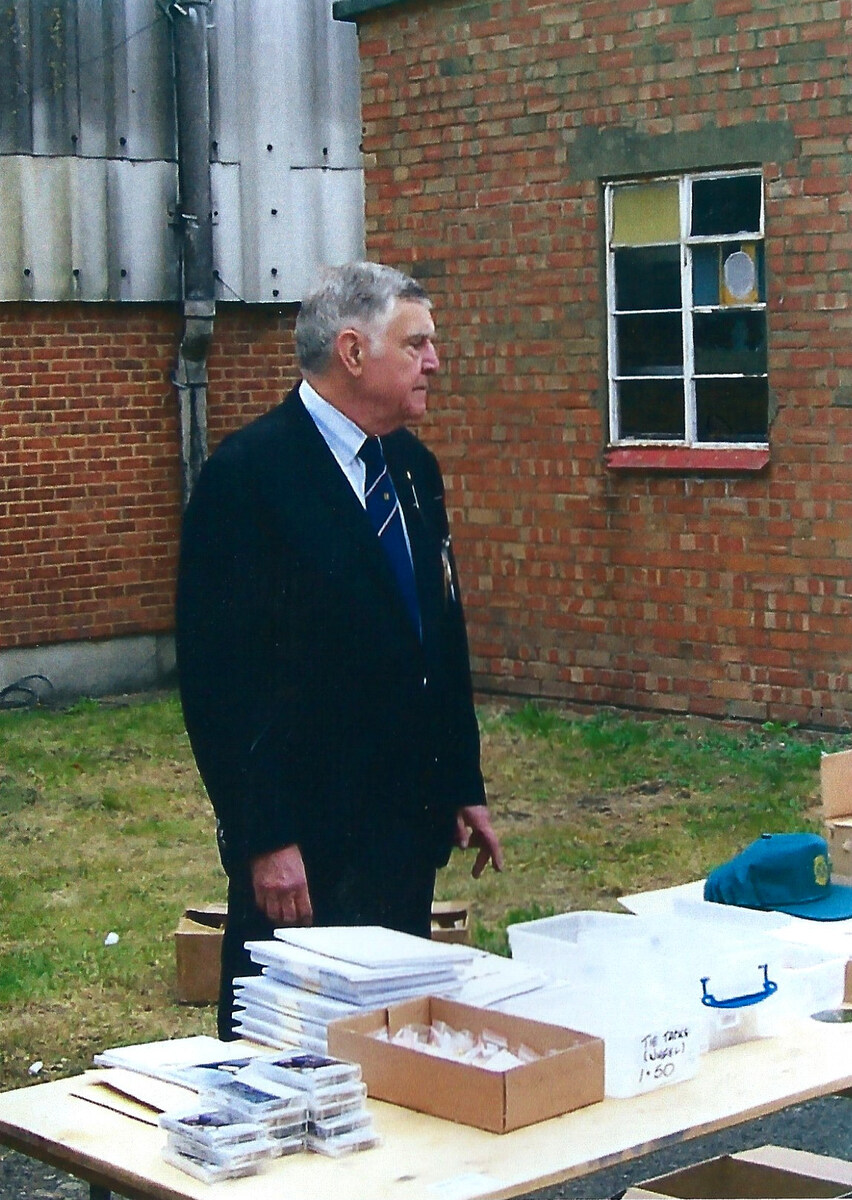 Next morning the discordant notes of Reveille brought me quickly to my senses: a quick shave (never do this at home) but the fear of being done not only for being unshaven AND late on parade led to a limping jog down to the line that was already 'right dressing' (I need a new knee!) arriving just in time to call '49' as they numbered from the right.

A big choice of cereals faced us in the Mess followed by a "full English". I meet the first 6T9er, Gordon Weston, and he decided to go round for seconds - was that ever an option when we were there? Sat next to a really nice guy - looked young enough that I almost called him a 'sprog' but thankfully didn't - turned out he was ex 44th! He said his name was Luigi and was quickly christened 'Luigi the squeegee. Asked if we recognised the tie he was wearing was red and its significance, we said no so he told us that in his time you had to wear a red tie if you were excused marching - you pick these snippets up as you march smartly through life! He had a new hip and was going in on Monday to have a new knee.

After breakfast, as it was warm and sunny, we decided to walk to the airfield calling at the shop for new batteries for my camera. Fancying a stroll around the deserted workshops, we tried one of the gates in the 4ft fence that surrounded all HQ and workshops. You needed a code but undeterred, Gordon called out to a chap who appeared on the other side and he let us in. After a pleasant chat with some Supply lads we decided to press on to the airfield then realised we didn't know the code to open the gate! We tried the other gates but no luck; sweating, I said I'd climb the gate but Gordon declined as the fence was nearly as tall as he was! At a loss we tried one more gate and gave the handle a really good push and... we were out! (you only needed the code to get in!) 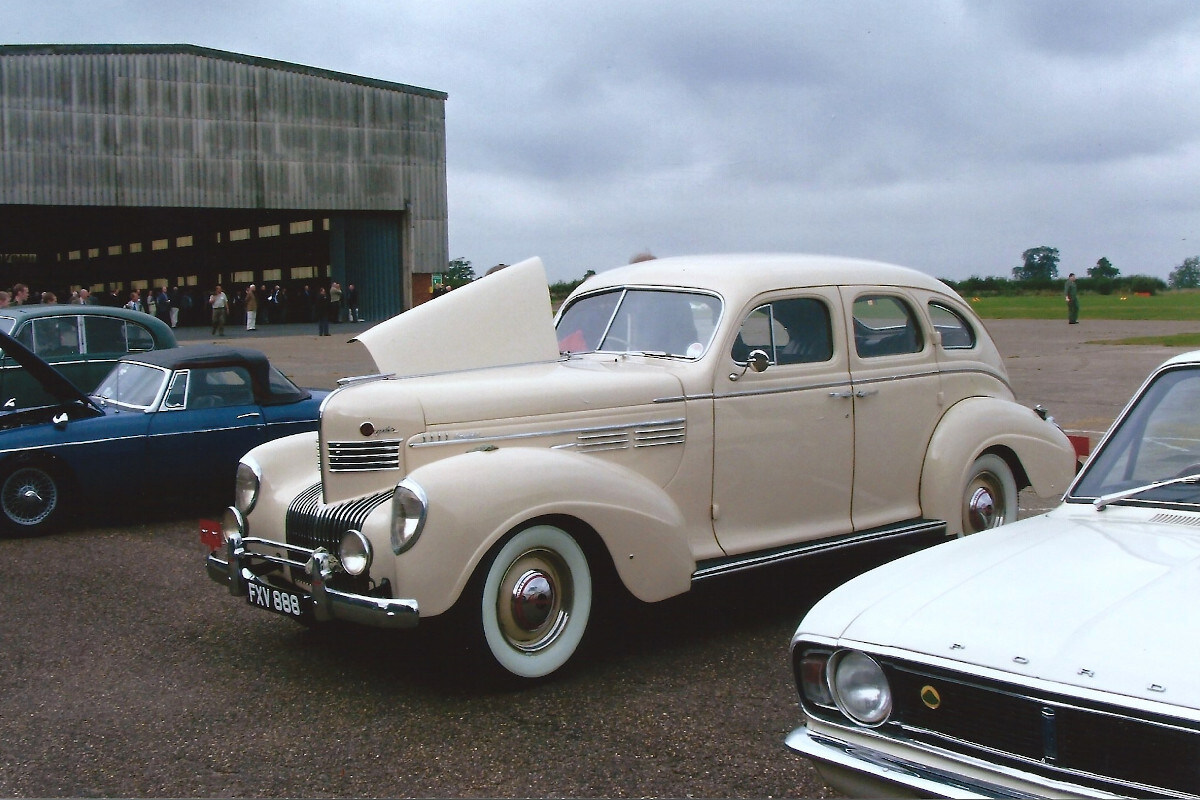 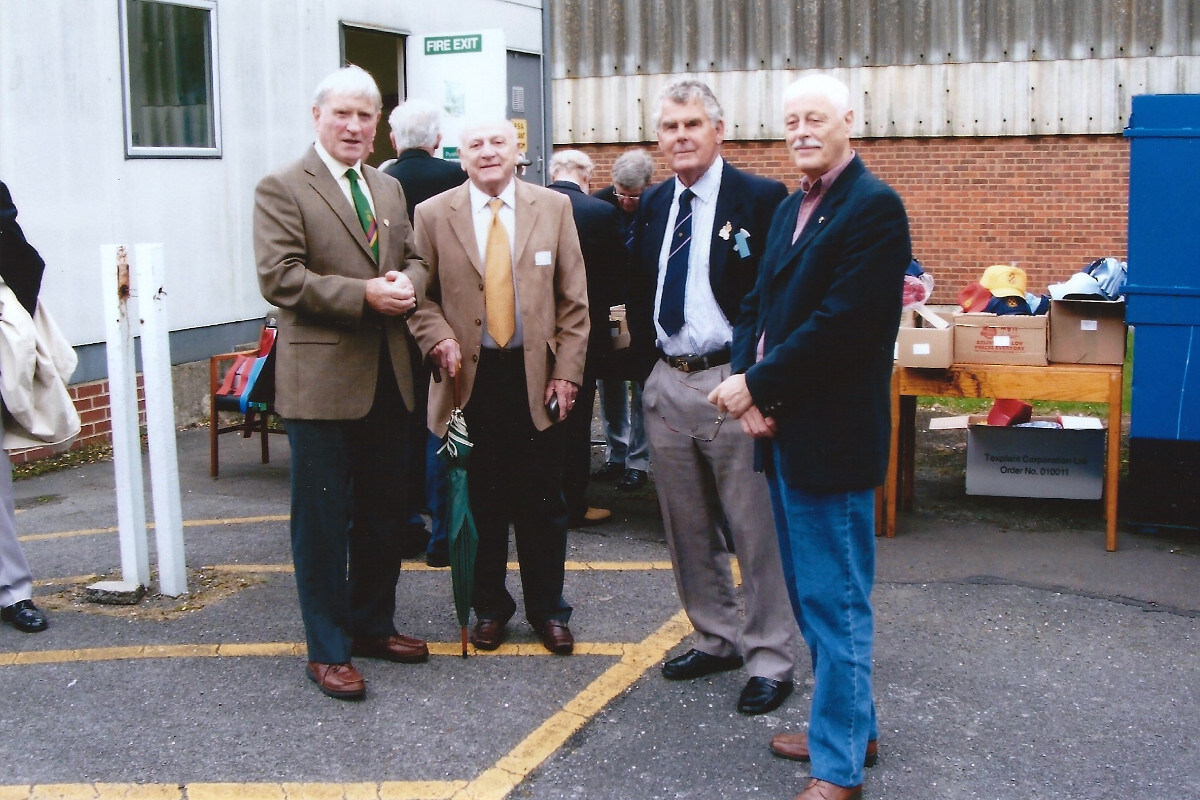 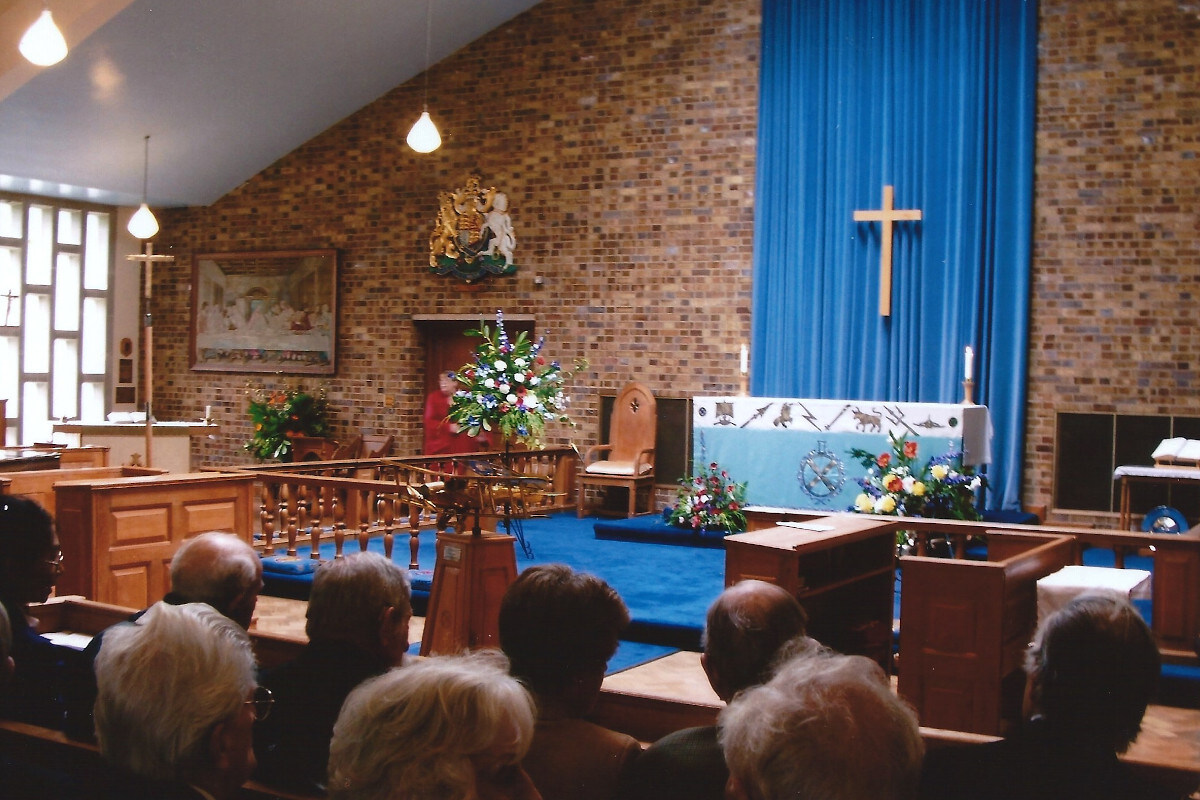 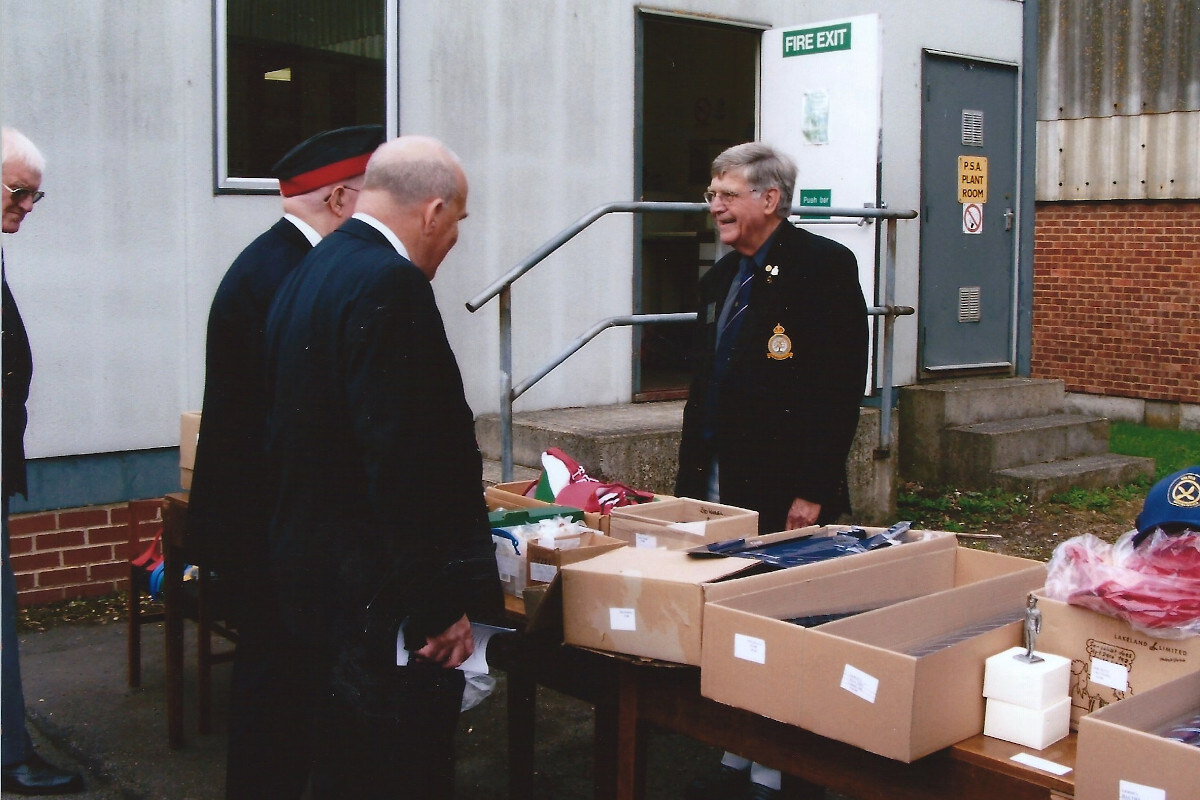 The airfield was packed but we'd missed the "Golden Oldies" so we went our own ways. Then I wandered, missing the real aircraft displays we used to have, met Perce, Nellie, Jock Sh, Frank, all the old skivers - no one had changed in the past year - then had my curry as the queue for a cuppa was longer than that for the meal. I don't know what they do to Halton curry but I am sure that Ex-Lax could learn something from it.

A slow meander up to the church - packed to capacity as usual - and afterwards some photos of the Entry windows - they really are magnificent. Over to the Workshops to fall in for the 'long and winding road'! I'm sure it must be my imagination that we are getting nearer the front. The one thing that doesn't change is the DIs [Drill Instructors] - ours was a nice young lad but he does have to the learn how to call the step as does the WO [Warrant Officer] who, straining with all his IQ (that and a packet of Durex), call of "-ift-'ight--'ift-'ight".

Then began the TT (Triennial Torture), the long climb up the hill - must enquire if they do replacement lungs. and finally the long march past. Back come the memories as you push the pain and wheezing away. Did we really square bash continually on this chunk of asphalt then off to Bedford and finally to Regent Street - in the rain - and our new Queen?? AND three whole medals shared between all of us wonder who got mine? 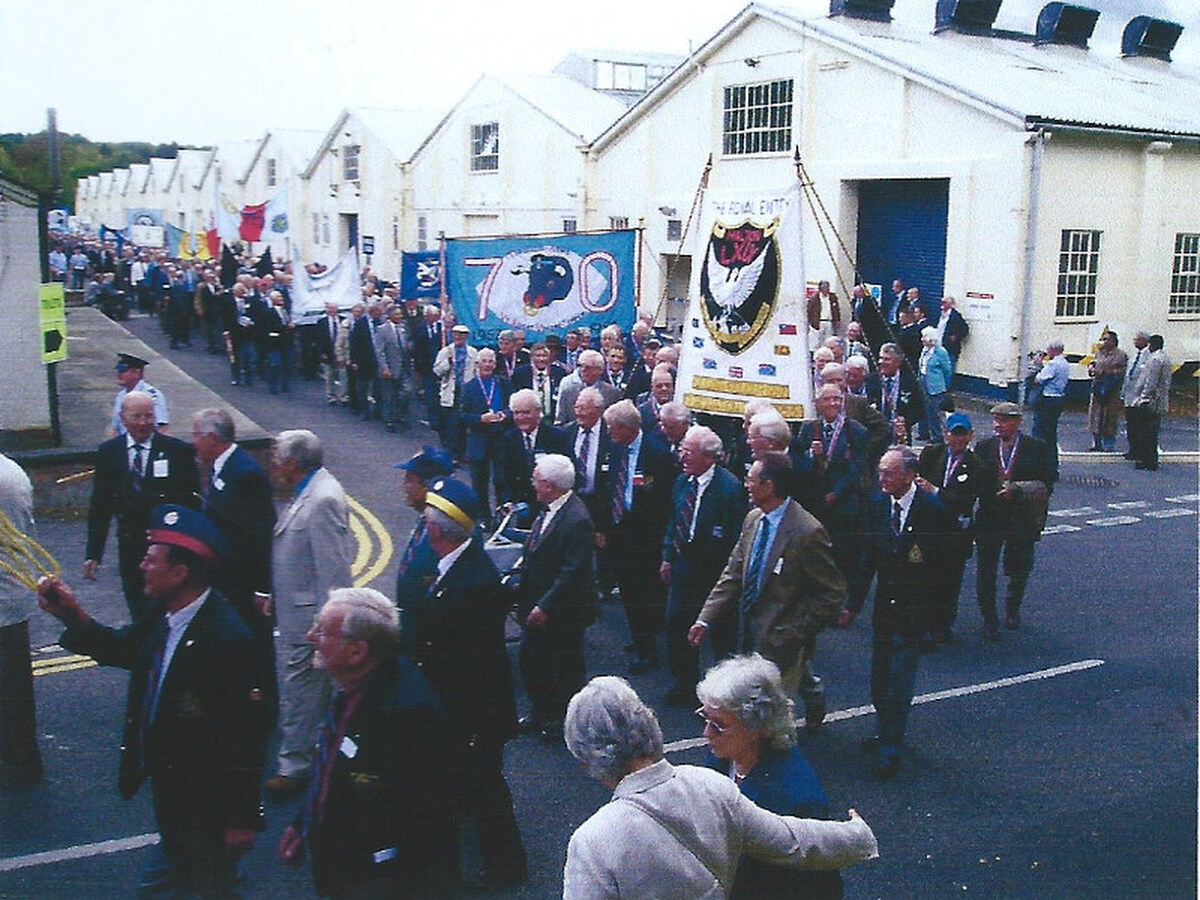 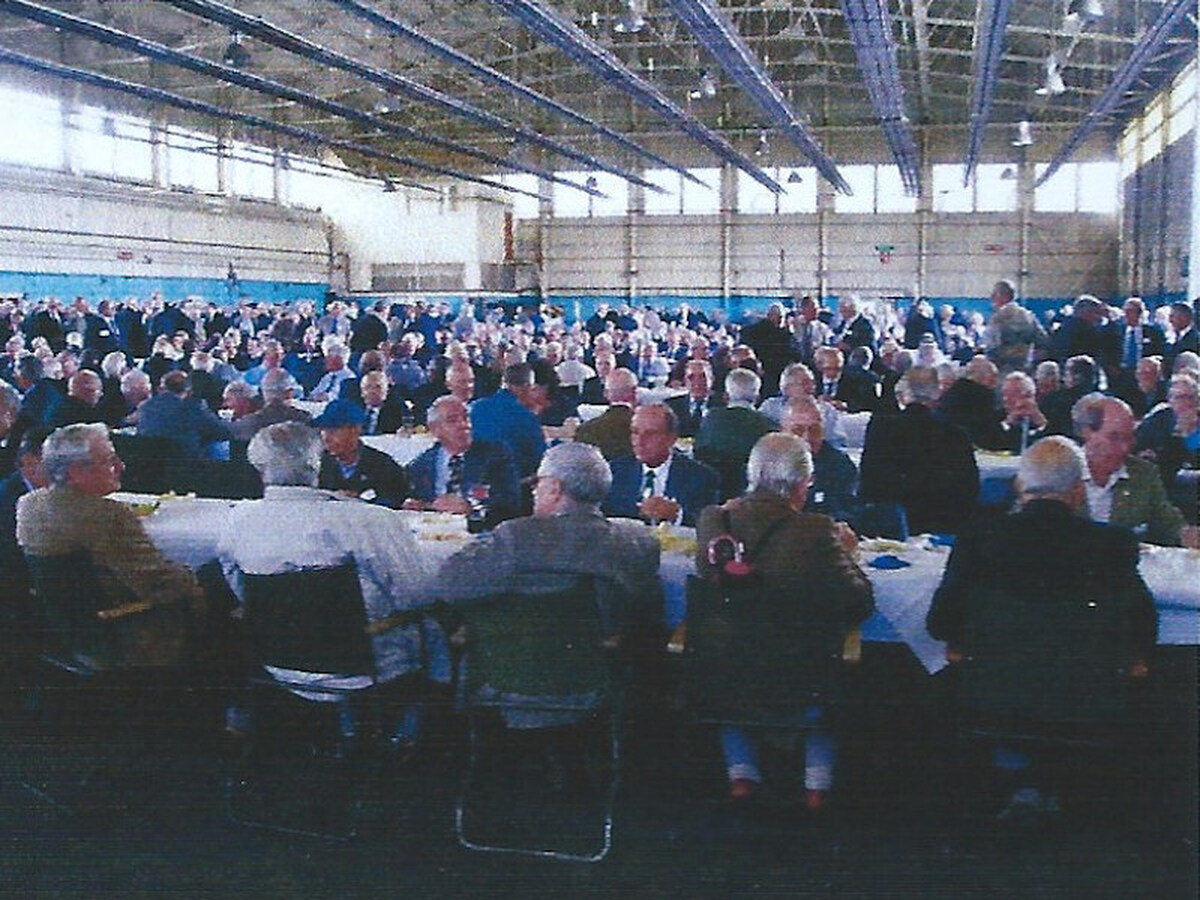 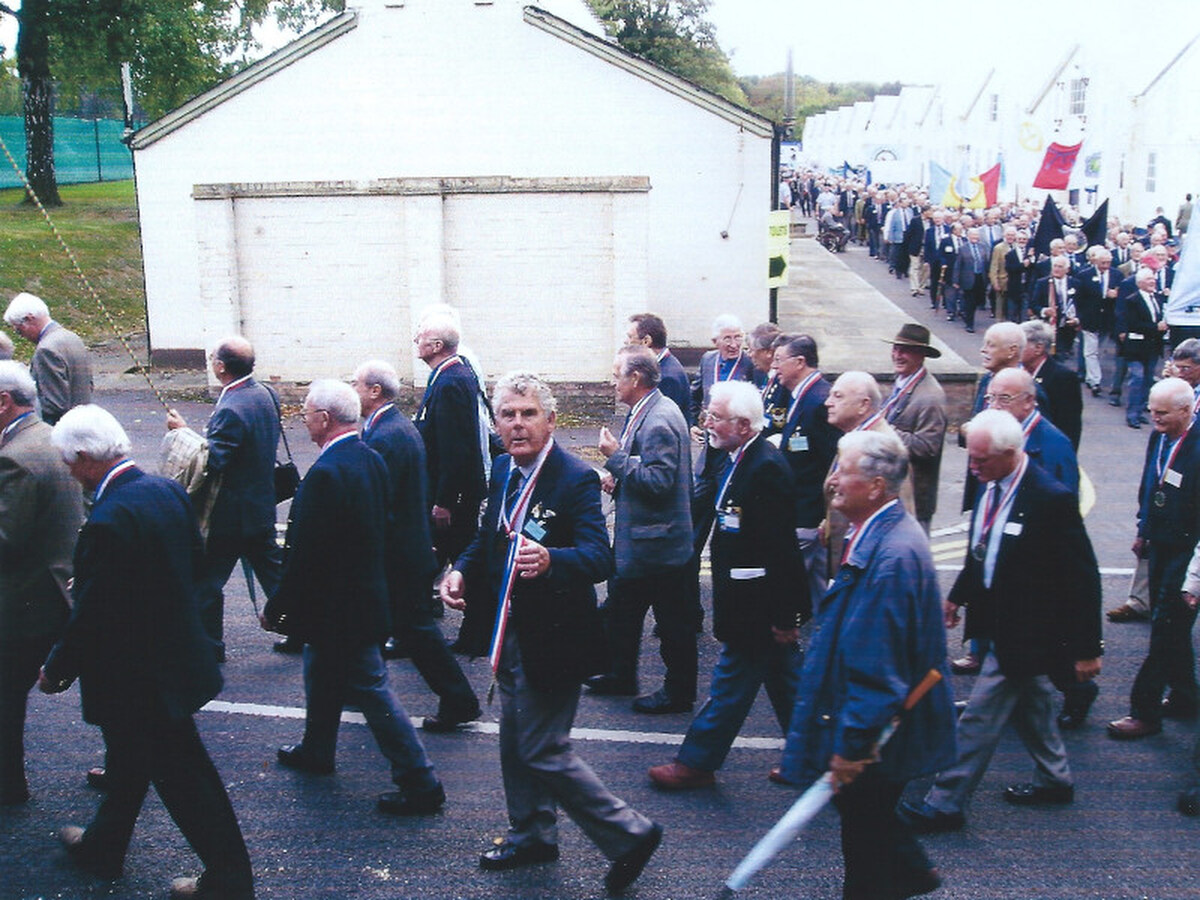 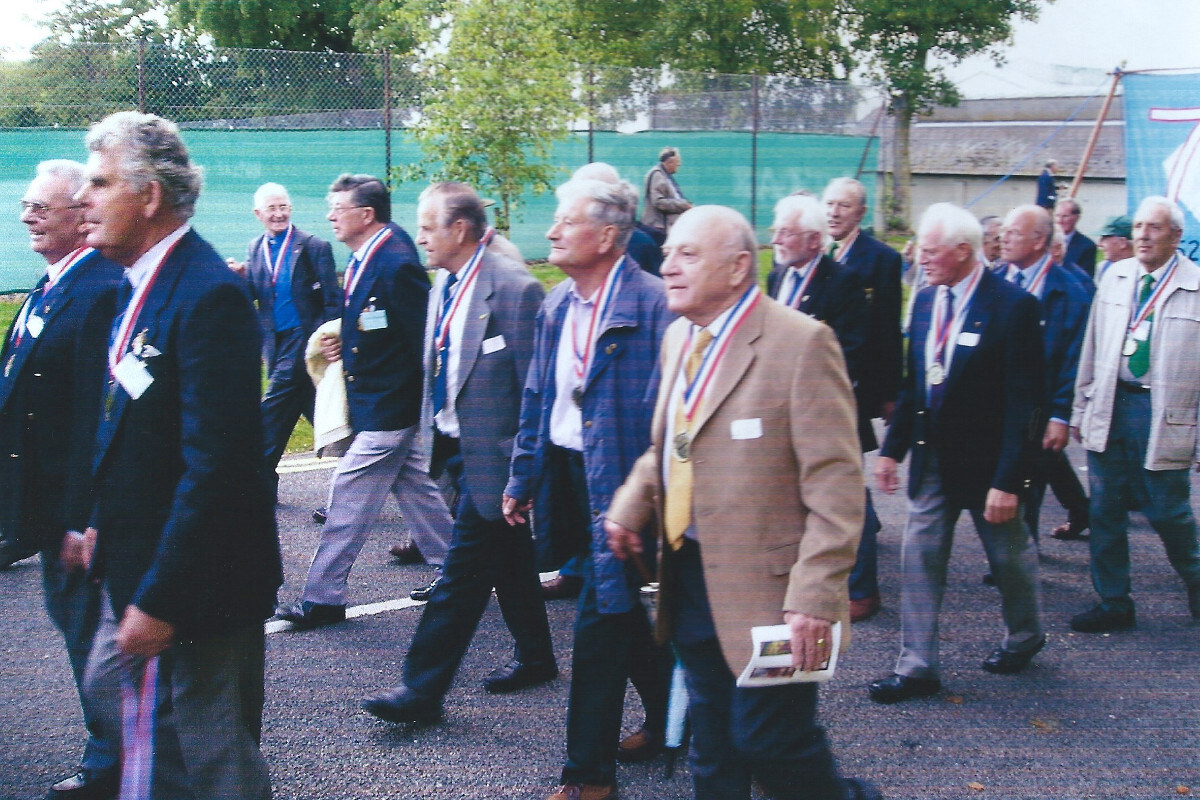 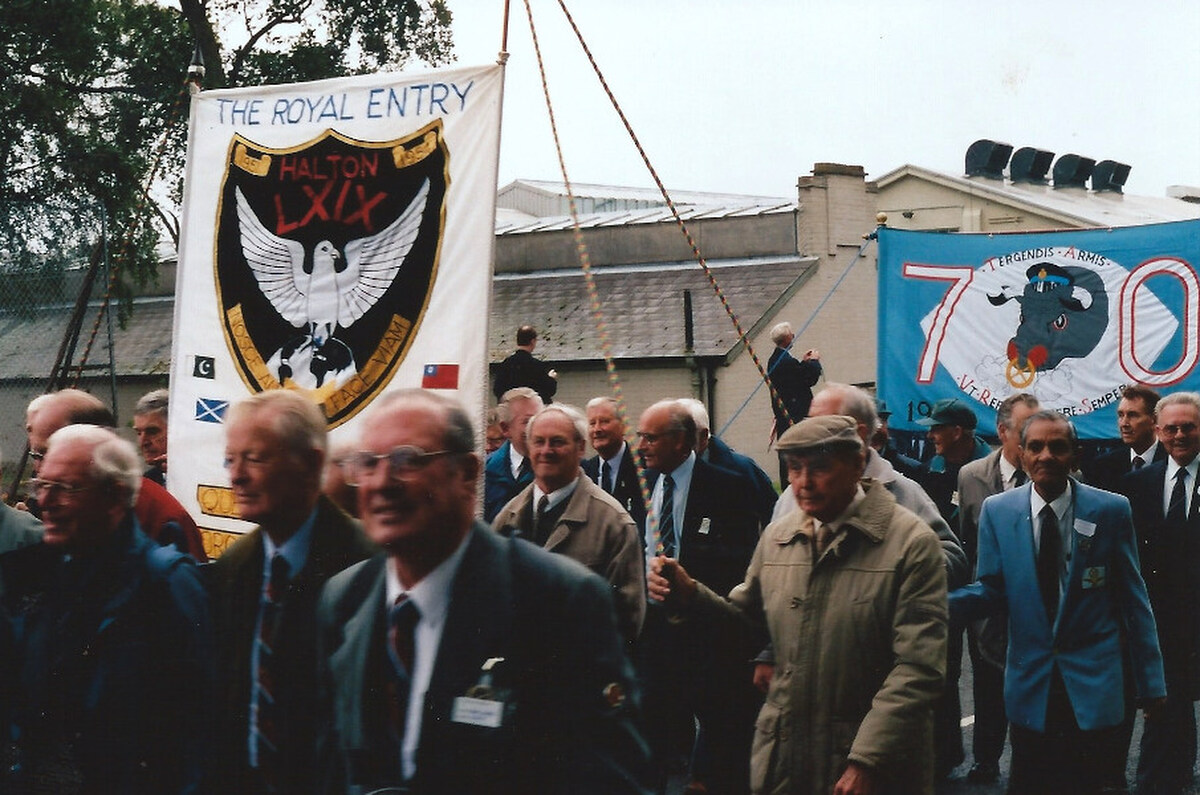 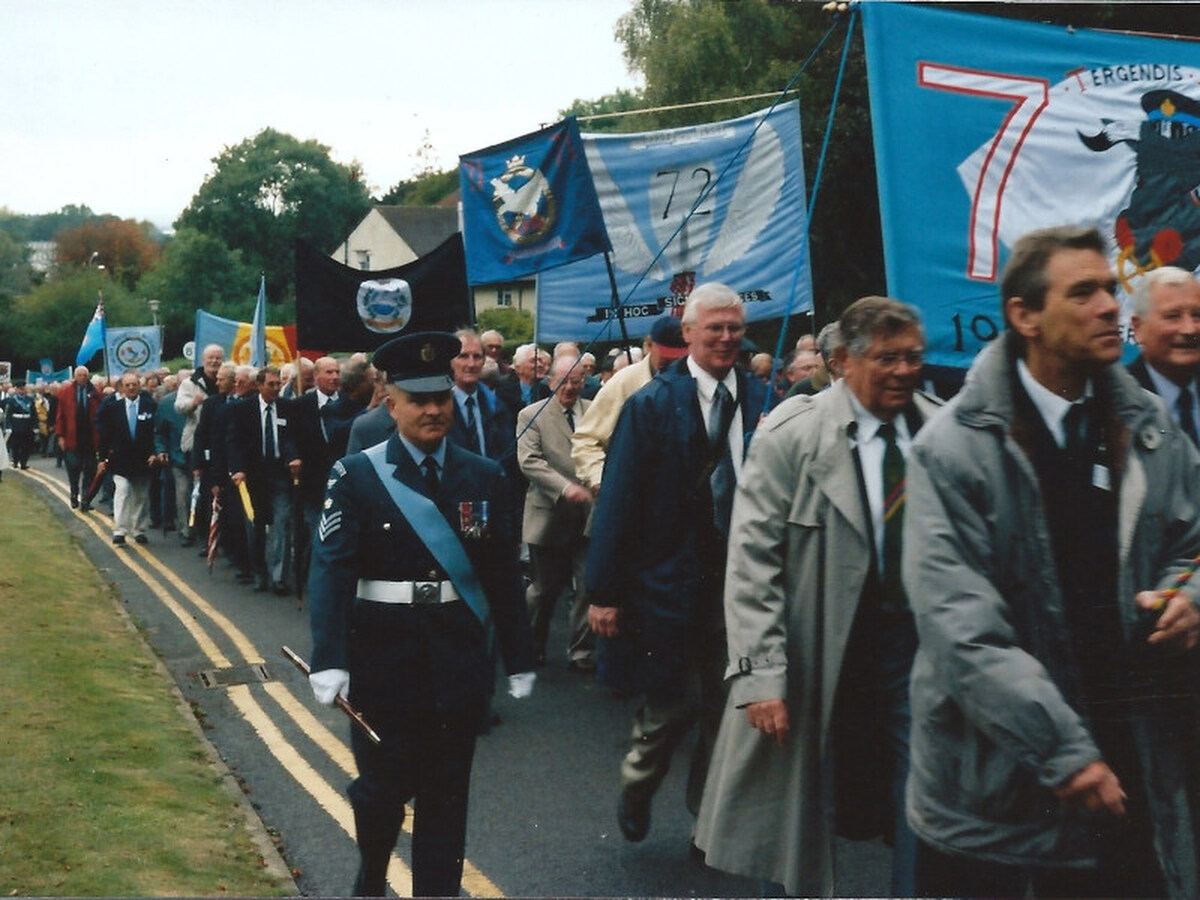 A few goodbyes and it was all over again, the CO stressing that he wanted to see all of us there in three years' time - I hope!

On from the ridiculous to the sublime - £20 to £90 for the night! Arrived late afternoon and finally understood what the receptionists wanted from me, up the bloody stairs again and off to my room - I couldn't find the lift, it wasn't in the cleaners room! Unpacked and down to the bar but everyone had gone to their rooms to smarten up for the dinner, and the place was populated with pot-bellied middle aged golfers. Quick shave, shower, s... and down to join my table, sitting between Mrs Kush and May and opposite the Ransomes - around 500 years of experience! (if only you could bottle it and sell it!).

The dinner was a disappointment for me (perhaps a choice of two/three main courses sent out with the booking form for members to choose from?) - I like my meat well done and my fish and chips! But the conversation made up for it AND I won a raffle prize, I 'came to the party' as is the current phrase, armed with reservations at having our current balance depleted by 2/3, ie £600, for the group but what a band, playing real music and a good proportion defying the limitations imposed by age - and 'shaking a leg! and so to bed.

Up early for my full English - got up to speak to someone and returning a minute later found that my half-eaten breakfast had been cleared away - what service!