The 69th Entry Apprentices Association's seventh reunion (eight counting the "unofficial" one in 1995) was a jubilee year as it marked 50 years since the commencement of the 69th's time at Halton in 1951. It was timed to coincide with one of RAF Halton's three-yearly Triennials.

The first report is by Mike Collins (engines).

The biggest and best so far? Well, some 137 (including 54 ladies) sat down to the reunion dinner held at the Spread Eagle Hotel, Thame. That our reunion weekend went off so well was due in no small measure to the tremendous amount of work put in by our Association Chairman - Tony Parrott - organiser extraordinaire.

The pleasure felt by all who attended, hesitant at first as one tried to remember faces, became increasingly obvious as the numbers checking in multiplied. "Hello you old b..., you're looking b... well, how do you manage it?" or words to that effect, seemed to be the general line overheard as groups came together.

A collection of old photos amassed from all and sundry by Gordon Weston was displayed with other memorabilia, in the bar of the banqueting suite, provided more talking points and even more "Do you remember?", but only after 'barrack damages' had been settled. Well this gave those attending a reunion brochure, commemorative coasters, name tags and the all-important raffle tickets. 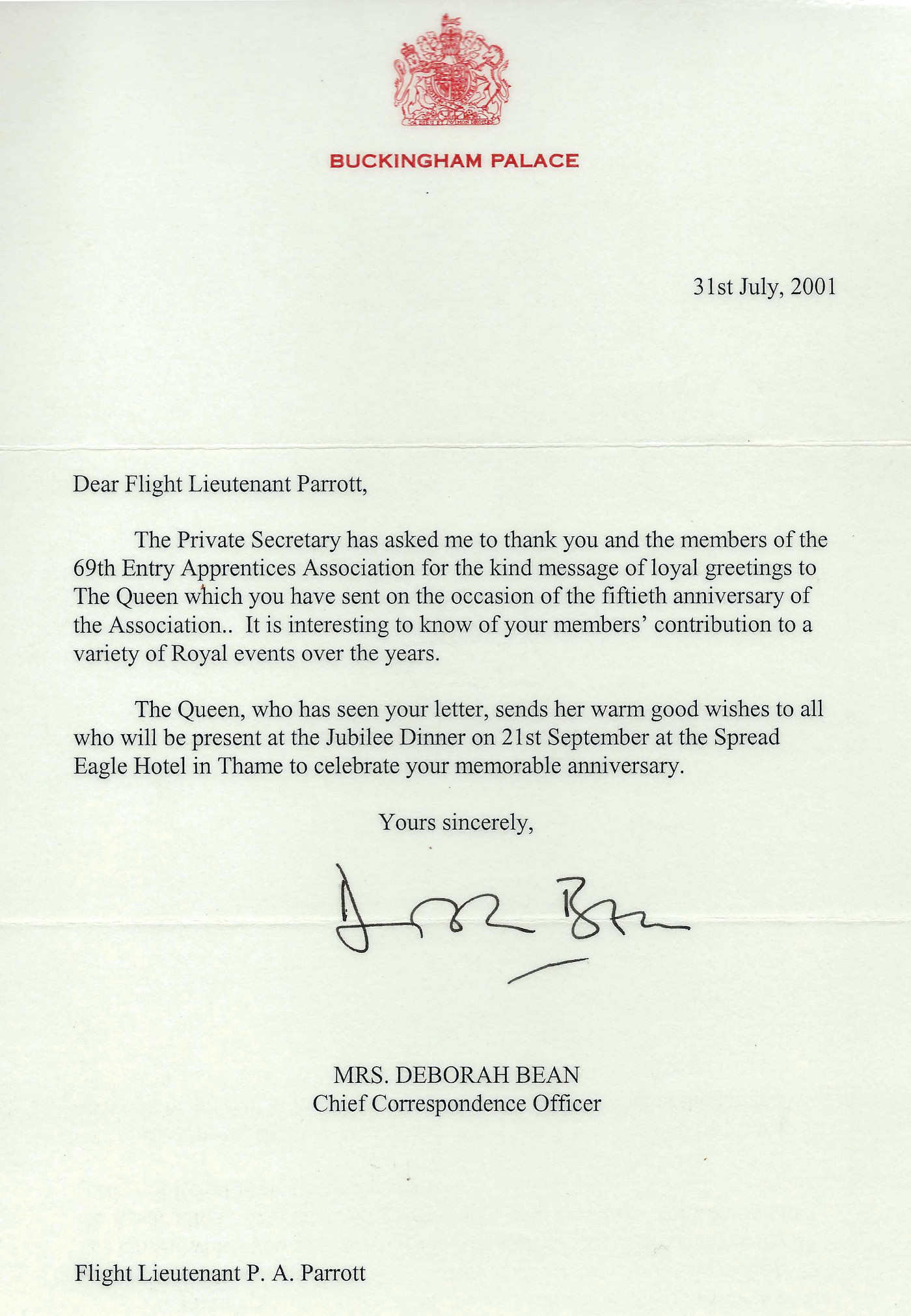 A letter on behalf of the Queen, thanking the 69th for their loyal supportBefore we knew it, time had gone and the coaches had arrived to take us to St George's Church, RAF Halton for the Service of Dedication for the Burmese Window. Group Capt Min Larkin, 63rd, welcomed us and handed over to the Rev Andrew Bailey to conduct the service. Stacey Cottingham read the lesson followed by Pete Quinn giving a brief background to the arrival, effect and assimilation of the Burmese Air Force apprentices into the RAF way of life and training. Alf King responded, in both English and Burmese, on behalf of the Burmese ex-apprentices. He thanked both the 69th and 77th entries for the thought and the giving of this commemorative window. Altogether a short but moving ceremony.

The service was followed by a general melee of blokes around "the Tribute" for a photo call. A chap on a ladder took many shots with his camera; we await the results.

In a practice run for the following day - more an amble really - we made our way past Main Point and up the hill to the hut on the square known as the Henderson-Groves gym, now the Trenchard Museum of all things apprentice. For anyone who hasn't been it is well worth a visit. The bed and kit inspection layout is, to say the least, not up to standard, worth at least three days' Jankers!! By the way does anyone recall 'caving' in the heating ducts between I & 2 Wings??

All too soon it was back onto the coaches for the return to our various hotels to get ready for the return to the Spread Eagle Hotel. Again the bar of the banqueting suite was available for pre-dinner drinks which was followed by our traditional piping by Tom Faulkner into the actual banqueting hall for dinner. Firstly our chairman bade us welcome. Grace was then said by Richard Hambly and followed by a toast to absent friends. There followed a two minute silence to remember those lost in the US disaster, after which Richard Hambly roll-called those of our entry no longer with us. A poignant moment for all. 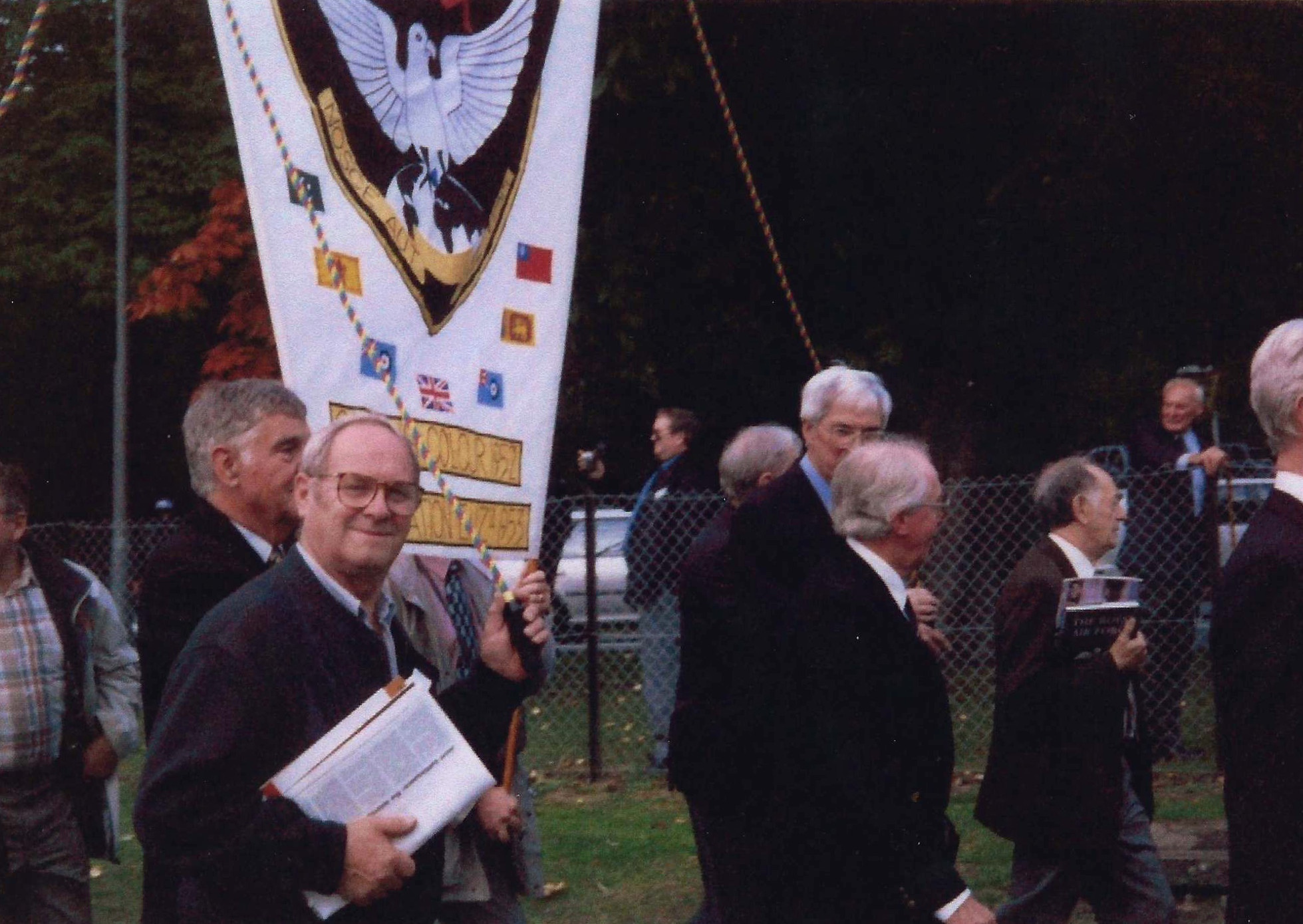 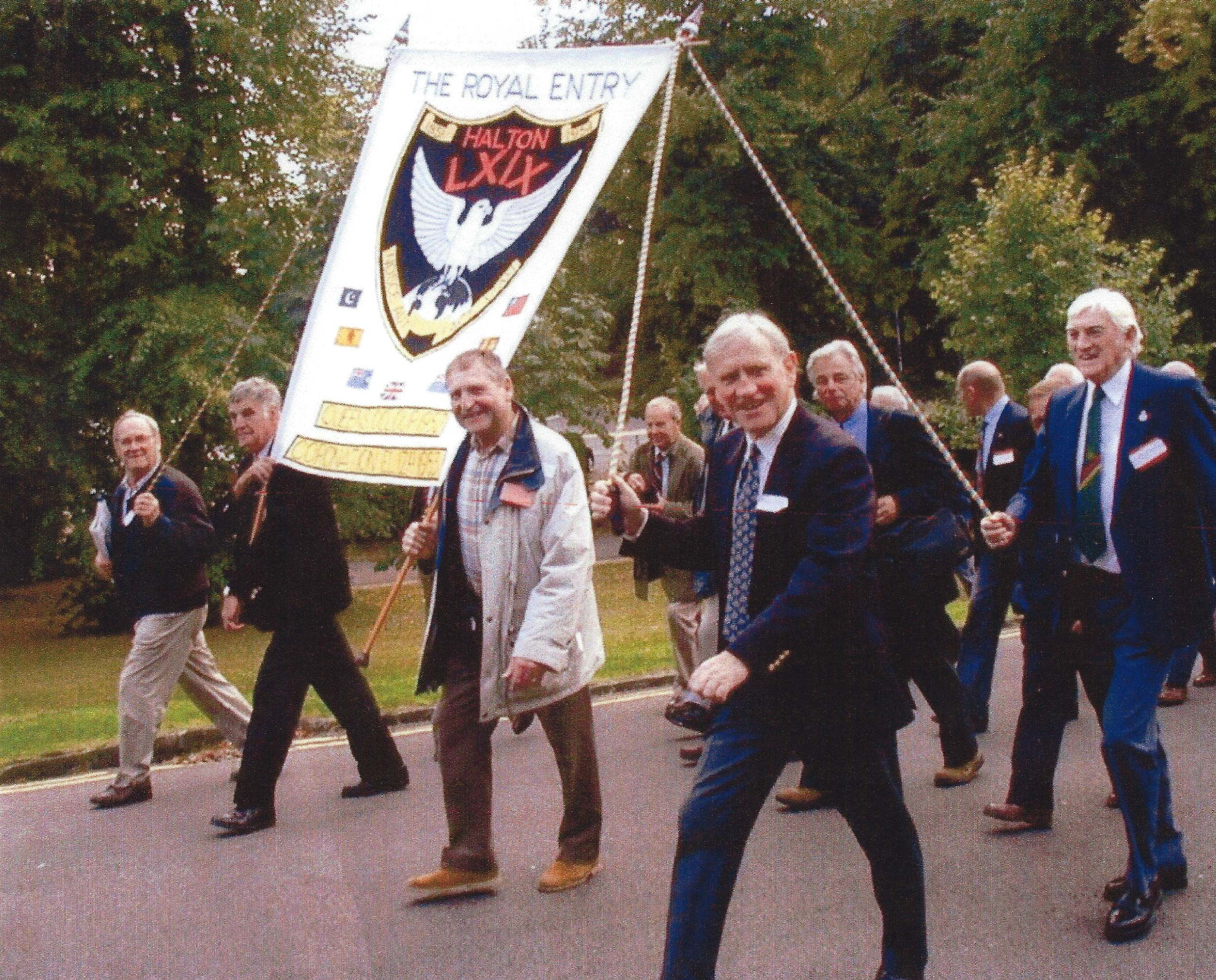 Then to background music, dinner commenced and the evening became somewhat noisier with the hotel staff pulling out all the stops and smooth service, it seemed like no time at all before John Nelson was proposing the Loyal Toast. Some people availed themselves of Gordon & Lilyanne Weston's generosity, a speciality sparkling wine at corkage; a real bargain.

Before introducing the guest speaker, our chairman announced that for those members who missed out on their Coronation Medals, Dave Symonds had 'manufactured' and presented to the entry a 'joint medal', for all.

Without further ado, Tony introduced the speaker, Group Captain Ian Blount, 84th Entry, Chairman of the Halton Aircraft Apprentice Association. Firstly he made special mention of the overseas members attending; it was especially nice to see Minnie Jackson present, and he listed the many and diverse countries that now have resident ex-brats. He then went on to give a state of the union message about the HAAA and his hopes for the future of the association, finishing with a 'call to arms', a drive to raise the membership numbers of the HAAA.

After the guest speaker, Hugh Perfect once again rose to the occasion and regaled us all with his new ode, "That Aylesbury Train", bringing back echoes of "did we really do that?" - Yes, we did!

Irwin Brohier followed with his own light-hearted reminiscences of life at Halton and expressed his thanks on behalf of the overseas apprentices.

At last it was down to the serious business of dancing the night away, with only a short break for the raffle, and then more dancing. For a bunch of 60's (and the rest) treading the light fantastic, we did pretty well. Just knackered in the morning. If further diversion was needed, Tony P had arranged for there to be a fair outside the hotel! At least it had finished for the night by the time we headed off to our rooms and hotels to get some sleep. 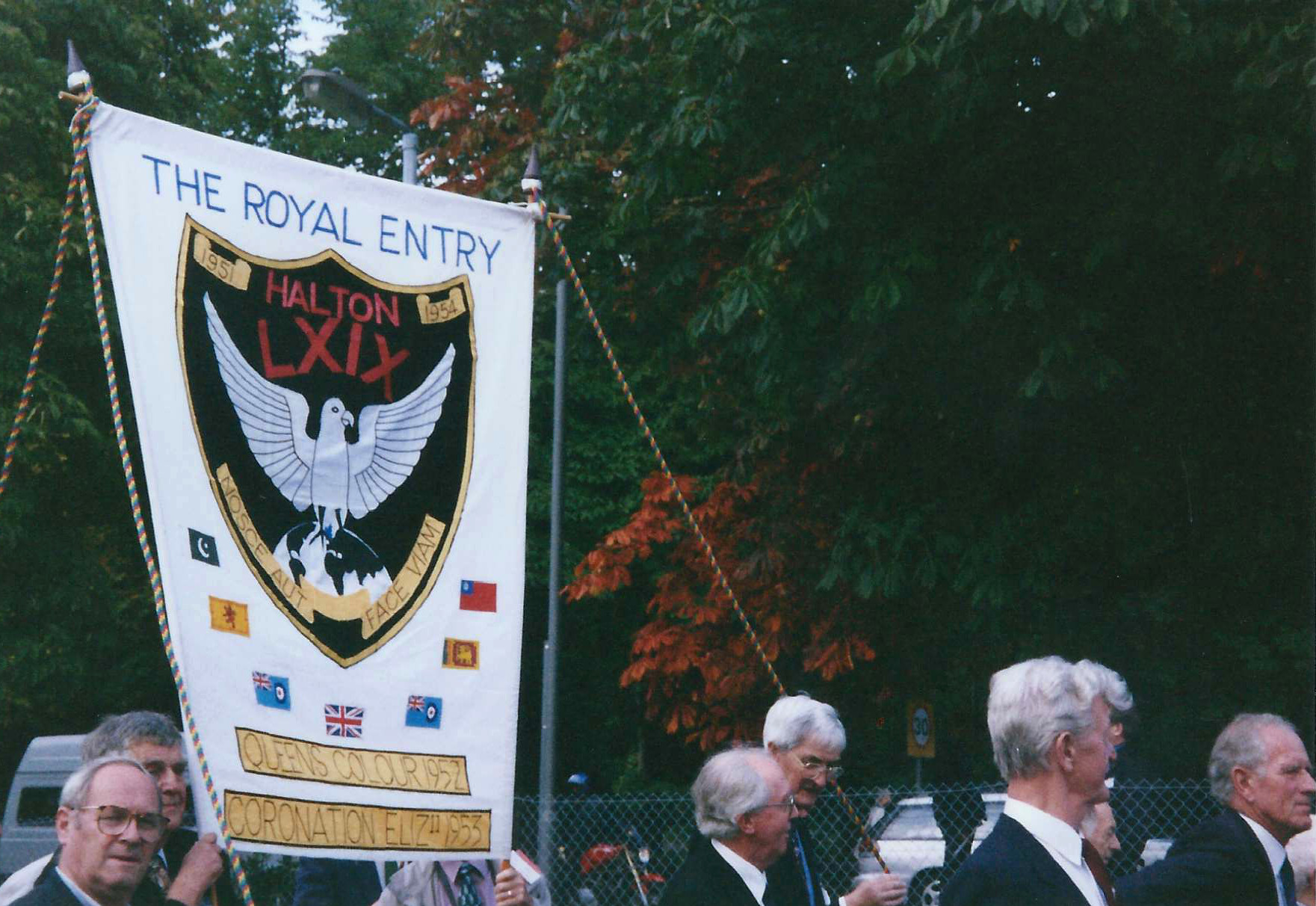 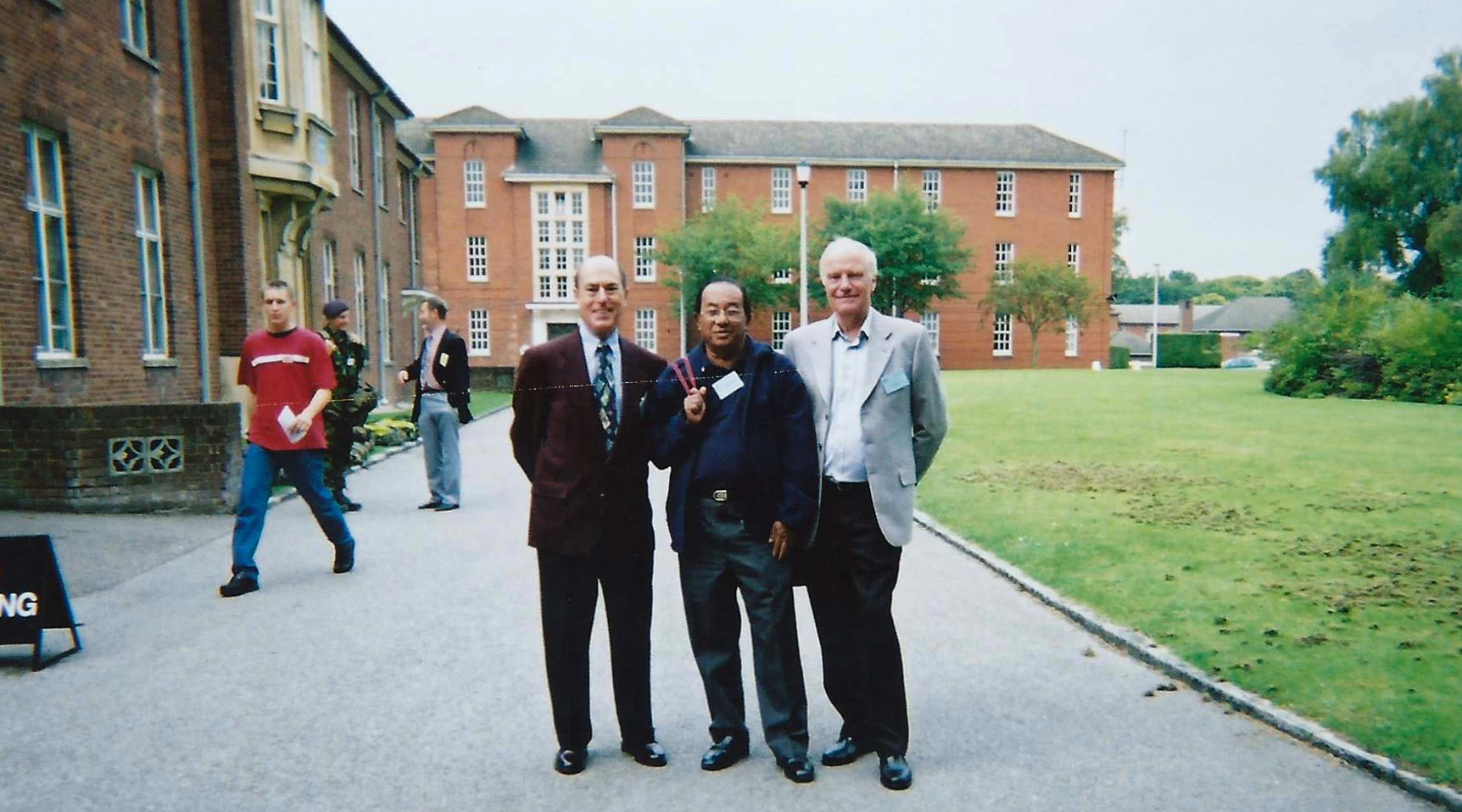 Doesn't time fly when you don't want to get up; Saturday morning had arrived and so had the transport. The fellows headed once more to Halton for the Triennial, and the ladies in the opposite direction to Oxford.

A number of the members got ready for home after the Triennial, but the remainder gathered for a more restful dinner in the Spread Eagle's collection of adjoining rooms known as the restaurant. This was filled to noisy full capacity. It was noticeable that people went off to bed much earlier than the previous night, so perhaps anno domini is starting to catch up. Sunday morning saw the final dispersal before we meet up again at the Petwood Hotel, Woodhall Spa. The biggest and best reunion so far seems a fair summing up.

On a sunny Saturday morning a bleary-eyed group of the 69th Entry members boarded a coach at the Spread Eagle in Thame for the short journey to RAF Halton. On arrival at Halton the coach driver, whilst attempting to park, forgot the coach was a double decker and proceeded to run the top deck into an overhanging branch of a tree, nearly turning the coach into an "open top"!

From the coach we walked to the airfield where we registered by Entry in one of the hangers. Most people made contact with members of other entries whom they had not seen for several years and nostalgia was the talking point of the day.

At 11am the bar opened and people suprisingly seemed to make this their base for the next few hours. Outside on the hardstanding was a vintage car collection and an excellent model aircraft display. The highlight of the morning was, no doubt, the "Golden Oldies" Pipe Band playing all the usual tunes and finishing off, of course, with "The Bear". 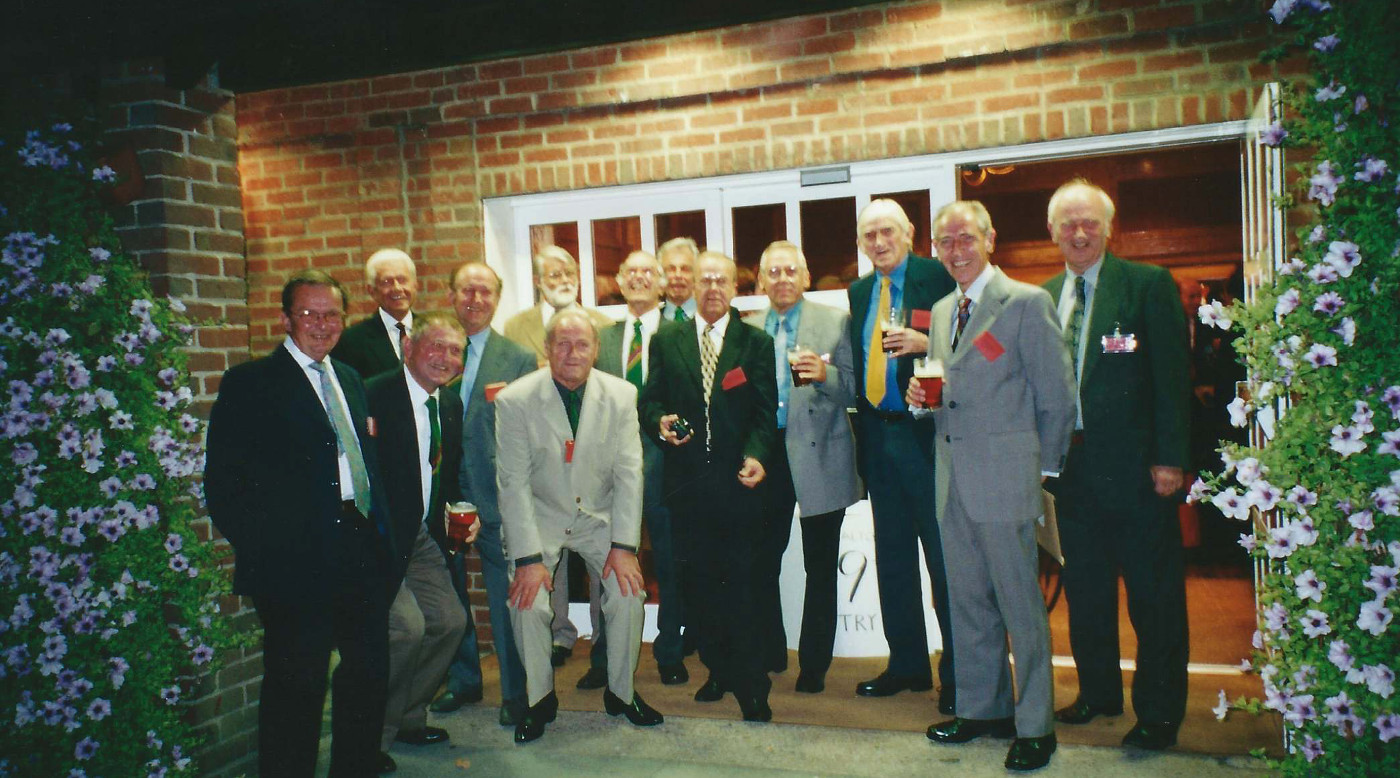 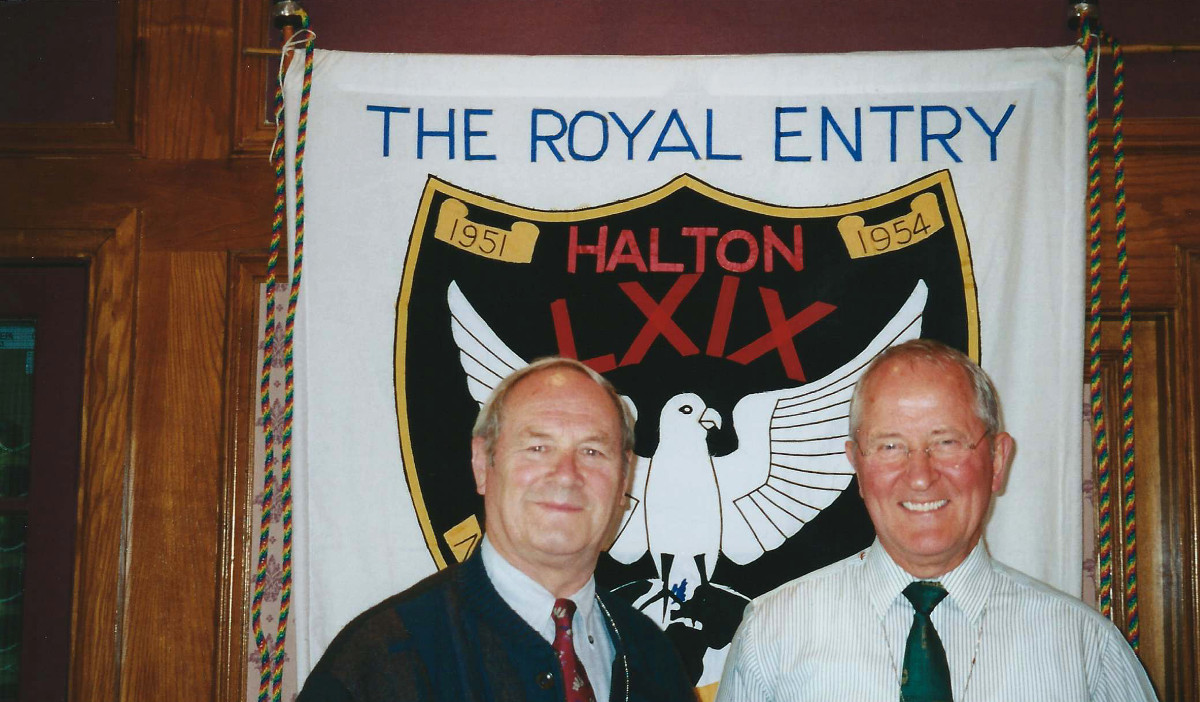 Lunch was now being served and was this year a hot meal which most members thought was very enjoyable. After lunch and more beverages some members formed up behind the "Golden Oldies" and marched to the church. Others took it more leisurely and walked around the old workshops which, alas, are now silent and devoid of technical equipment The swimming pool was still in place and useable. This brought back some memories to Eric Wilson and myself, having swum many lengths during our stay at Halton. Unfortunately, the film show scheduled for the Astra was cancelled but the museum was open, although most 69th members had visited this and the church on the previous day.

Eventually it was time to form up in Entries for the traditional march to Henderson-Groves parade ground. Local DI s in their usual manner attempted to obtain some sort of order. The parade got under way, most entries marching behind their Entry banners The 69th appeared to have the largest contingent. On finally reaching the parade wound with no reported heart failures, we marched past the present C.O. of RAF Halton. When the 69th approached the saluting base, Gosling, who had waited fifty years for this moment, gave the order to "eyes left".

After forming up on the square the assembled HAAA members (I would guess 2,000+) dismissed and most of the 69th returned to Thame to rejoin their partners.

A good day was had by all and looking forward to the next reunion in 2004. This by the way will be fifty years since we passed out - any suggestions?