A quiet start on the Friday evening with the first four arriving at the hotel. But as Saturday morning progressed the numbers, and noise, increased dramatically. Many had not met for the forty years but generally were all recognised. The bar did good additional business with lunchtime sandwiches. Come 3pm and forty seven members filled the booked room for the formal meeting which began with a welcome by Tony Parrott. All the boring bits were progressed through and we achieved our target of six committee members the meeting was also very keen that the subs were set at £5 per year (we definitely will not run out of cash for a while!). 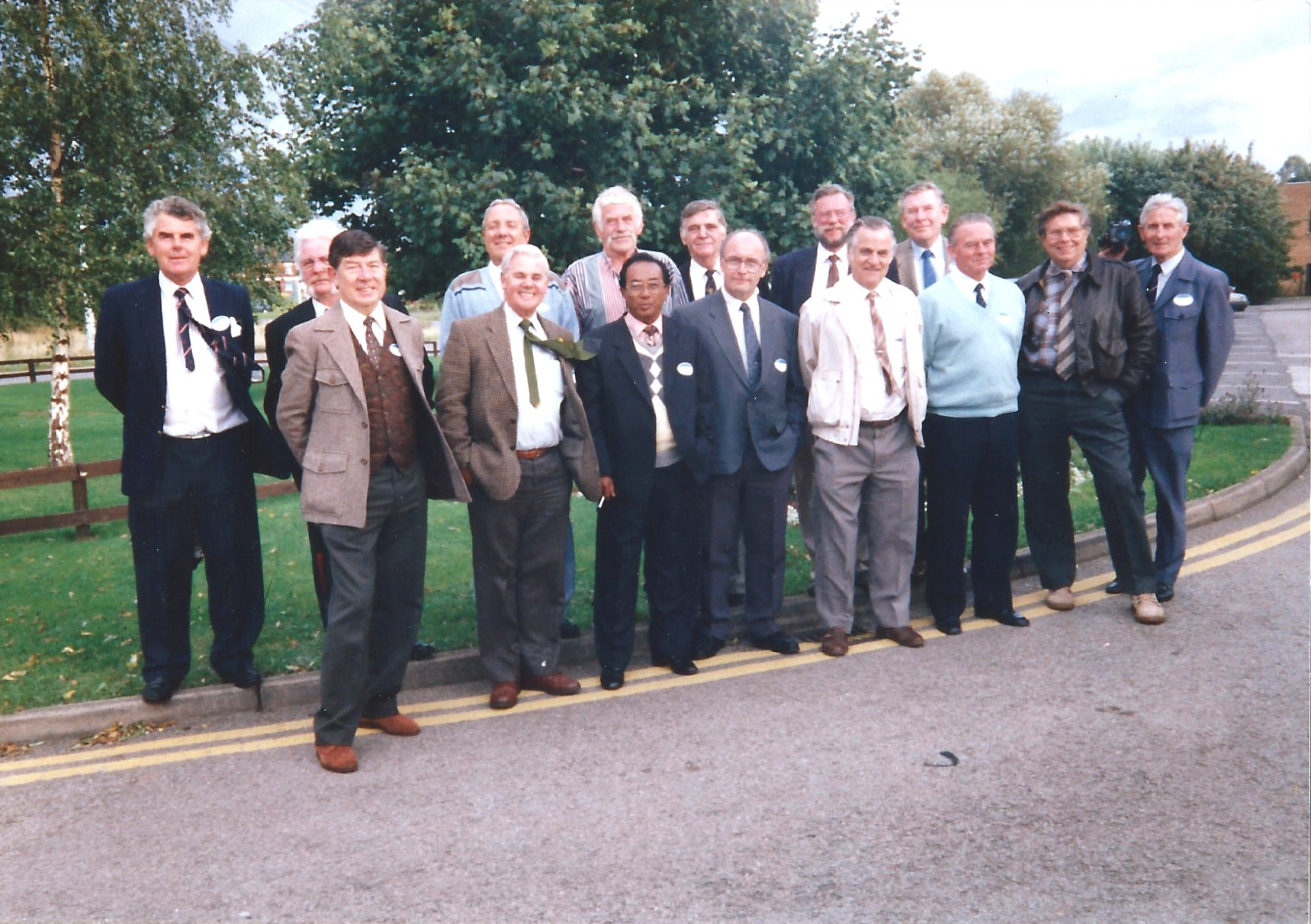 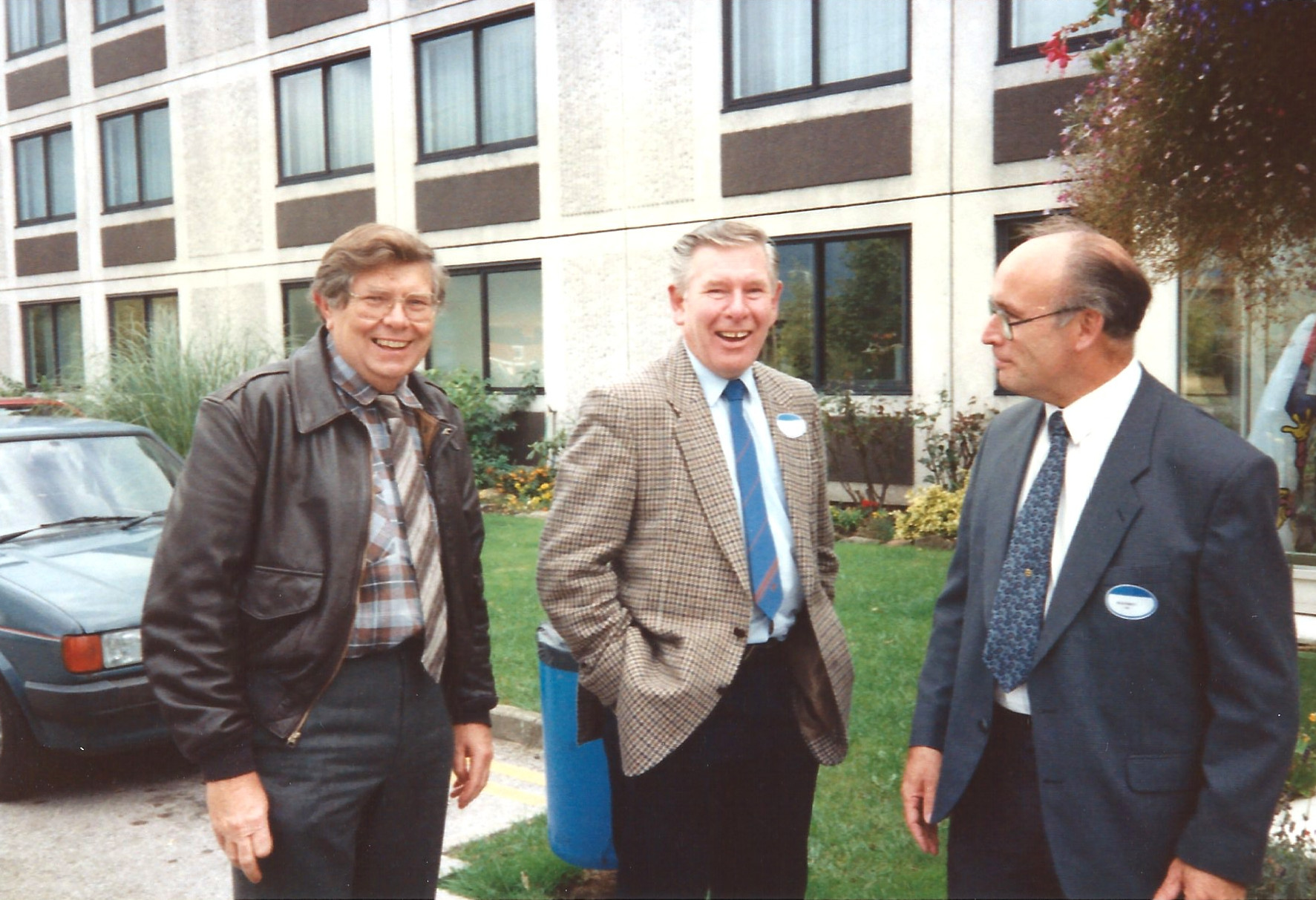 Then it was back to the bar area, and maybe a quick wash and brush up in one's room, before being piped into the dining room by Tom Faulkner. We were seated around circular tables with a fair mixing of trades - but a little bias towards one's own. Generous donations were collected towards the wine corkage charge; a raffle was also held the prizes having been 'generated' by Tony Parrott plus some tea brought over from Sri Lanka by Buckie Buckman. Both items generated goodly sums to our funds.

Entry Badge At the reunion various members gave us translations of the motto: NOSCE AUT FACE VIAM, slightly different lettering to the one published. Buckie Buckman had written to us prior to the reunion with the translation: 'If you can't find a way, make one'. He also added: 'If you can't fix it, F--- it.' We awarded him a prize of a bottle of wine.

We had no formal entertainment - none was needed! After the dinner, though not straight after, it was a return to the bar or bed. In the morning there was a drift down to breakfast, still more reminiscing and then departure to all points of the compass. Was it a success ask anyone who attended I know what their answer will be!

Forty years on, by Terry Hardeman

I have to apologise for the personal style of this report on the September 1994 reunion of the Old Sixty-niners but for some unaccountable reason, (nothing to do with the booze consumed that day, of course) my notes of that day have become progressively illegible. It was, in any case, a great occasion for renewing personal friendships. 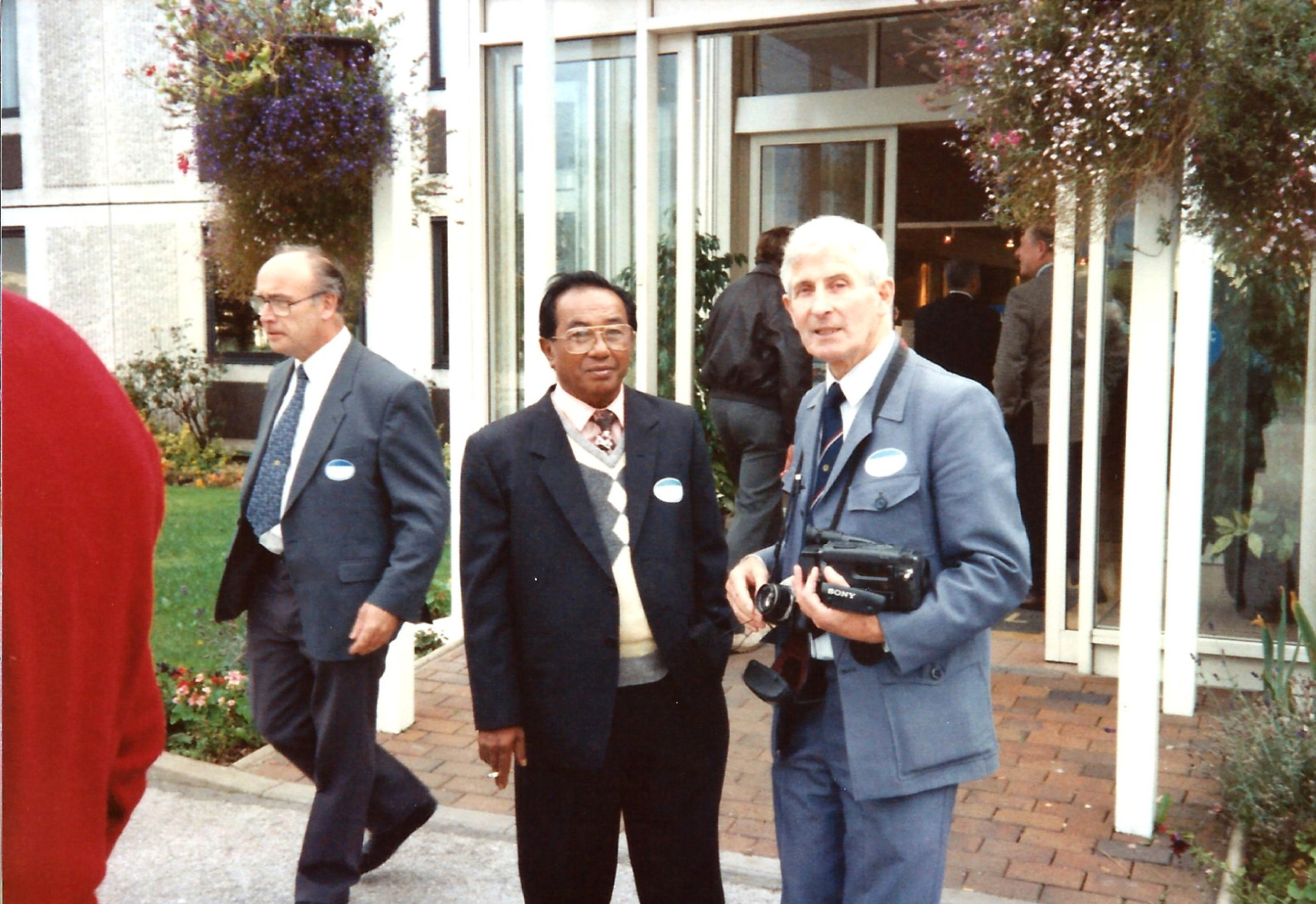 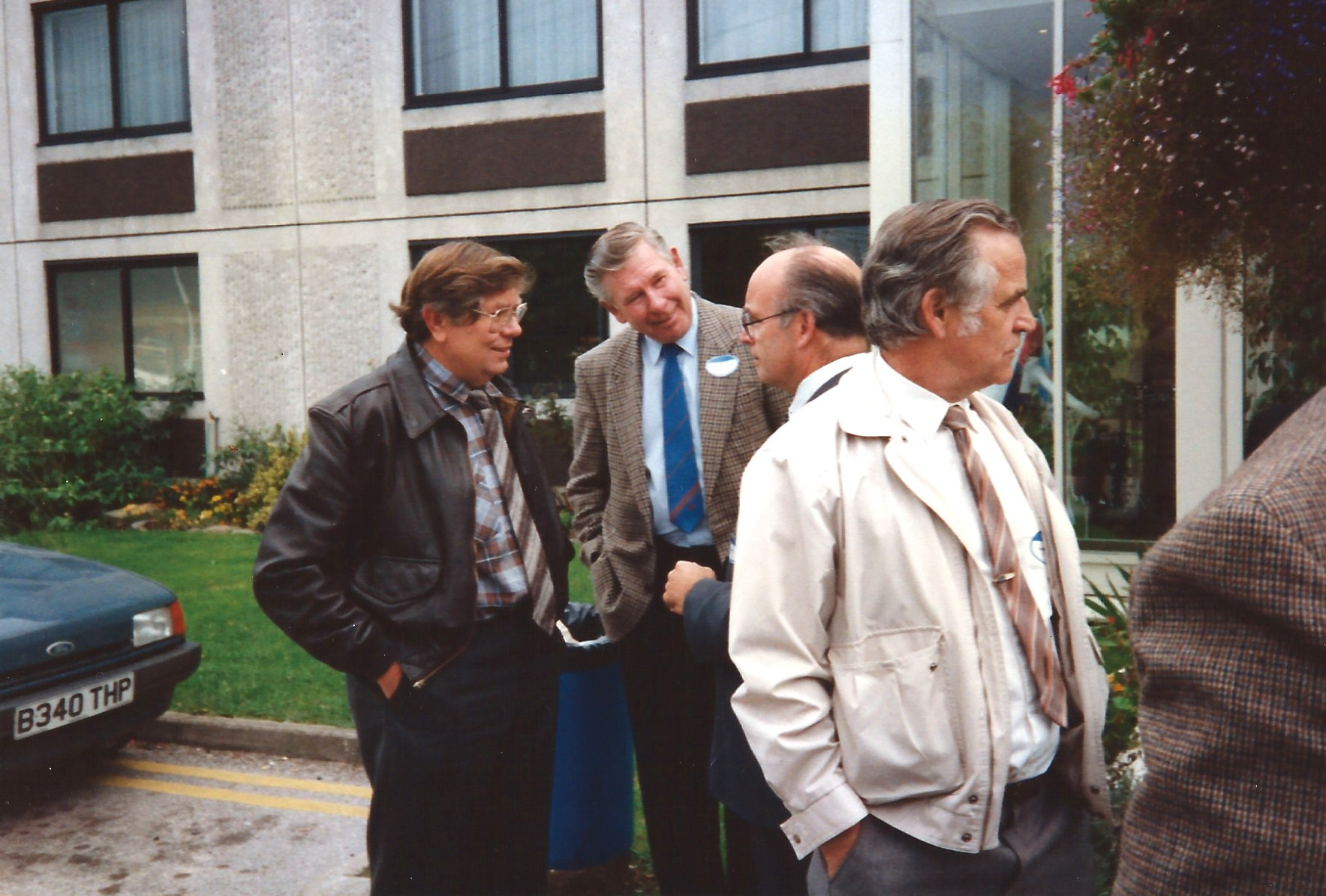 You could have mistaken us for a weekend convention of salesmen. Certainly the Novotel, Coventry, venue was appropriate - a clean, characterless and slightly worn hotel, lurking in the dust of the adjacent M6 motorway. It was the sort of hotel, frequently patronised by commercial travellers, that is well used to such events. But the staff were friendly and kept the beer flowing.

When they asked us why we had taken forty years to get around to organising a reunion, few of us had a valid answer. It was a bit like finding an excuse for dodging a church parade. Perhaps it was because most of us had been too busy with our lives to do anything about it before, putting such matters in the "round twit" file together with the other good intentions. Perhaps it was because the original prime mover of the reunion, Brian Woodward, had joined the growing number of absent friends; or perhaps it was that so many of us having reached some degree of retirement we had at last found the time to do some of the things that we had been putting off. Certainly we were grateful to Tony "Perce" Parrott, Frank Sheppard and Gordon Flocking for their organisational efforts

The afternoon passed effortlessly. For most of us it consisted of sandwiches washed down with a pint or two of local brew and conversation peppered with, "Whatever happened to old so-and-so?" We certainly bore little physical resemblance to those lean, eager youths who once marched up and down the hill to workshops and school behind the pipe band and devoured disgusting cookhouse food with such gusto. (Incidentally, I am informed that the RAF apprenticeship seller/le is now disbanded but that in its latter years, the lads were bussed to work). Almost all of us had put on at least several inches round the waist and acquired more than a few grey hairs in our receding hairlines but perhaps slogging up that hill had not done us any long term harm.

Some, however, had hardly changed. Rubicund and genial George Rork, Wing Cdr. (retd) and now a logistics consultant with Schlumberger Technologies, probably never laid claim to being slim but seemed to be holding the years very well at bay. So was former Military Band Drum Major Alan Skipp, smart as paint as ever and with a fund of memories which most of us had probably erased as we shook the Halton dust off our feet. Skippy, a former project manager with ICL who speaks fluent Fortran and C++ and is currently software project manager with Marks & Spencer, even confessed that he had once dropped his mace in the Lord Mayor's Show. 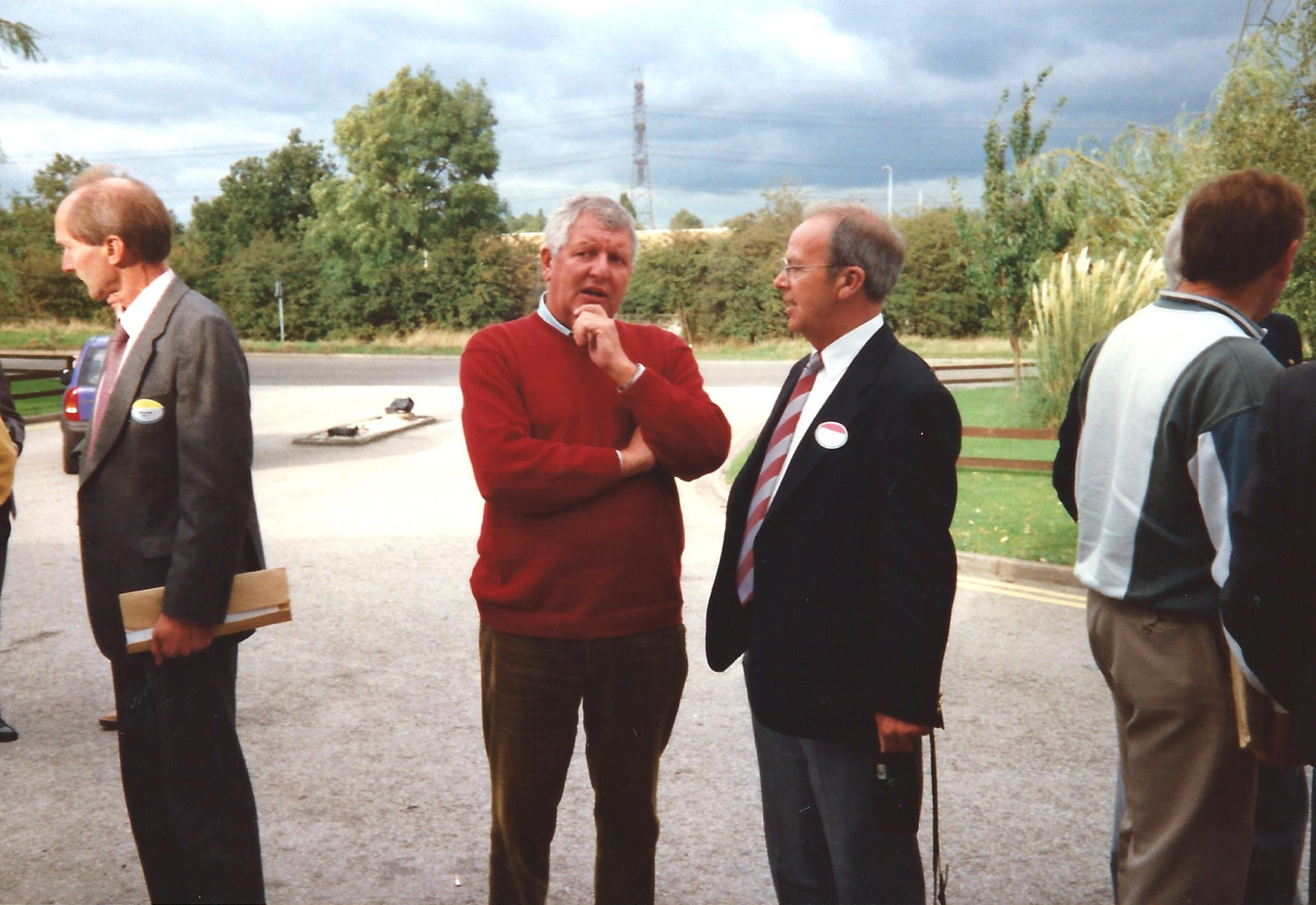 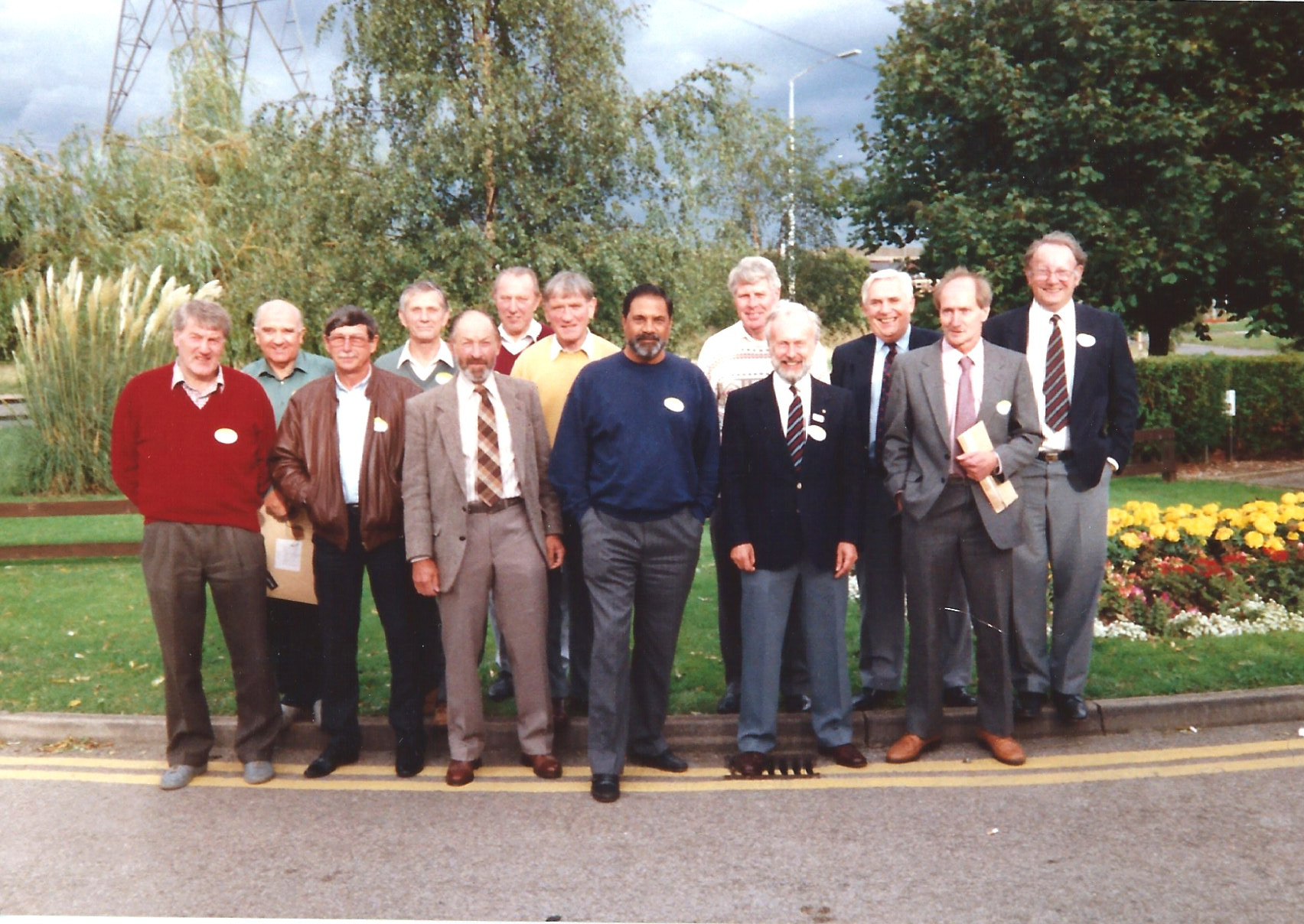 And the evening was not without personal embarrassment as I was reminded of my own efforts at Halton to devise an instant "bull" for my boots. It cracked and disintegrated shortly after I appeared on parade. I prefer suede shoes now. I don't think I was ever destined for Air rank, anyway.

There was a brief note of solemnity as we recalled those who with the best will in the world could not have joined us. They included Ron "'Scused Boots" Martin (an flames) who was tragically killed in a helicopter mishap in Singapore shortly after leaving Halton. Perhaps he was there in spirit, although I suspect that alive or dead, he would have found some excuse for non-appearance. Also remembered by the airframers was Brian Luesley whose young life had ended when he rode his motor bike into an unlit lorry on the Amersham Road.

Many of us have aspired to be pilots but few of us ever imagined becoming a "sky pilot" like former Armourer the Rev. Richard Flambly. Richard had capitalised on his fame in remustering to the clergy by being commissioned by the BBC to record our gathering on video for posterity. I doubt that it will make peak hour viewing, Richard, but I imagine that if you can obtain a few copies you should have a brisk trade. Richard, I noticed was appropiately abstemious with the booze, so his records should be in a steadier hand than mine.

Someone ostentatiously claimed that we were "The Royal Entry" by virtue of the fact that we had provided a contingent for the Coronation parade. I still lay claim to a special spot in the gutter (which some think most appropriate) outside Raoul's shoe shop in Regent Street where I presented arms in the drizzling rain until my hands went numb, but I suspect those who went to summer camp instead had more fun. What changes we would make if we could live our lives again!

While I had probably travelled the greatest distance to attend - from Singapore and made easy by my airline concession with Cathay Pacific Airways - we should note that T.C. "Bucky" Buckman was there to wave the Sri Lankan flag. Laurence "Jock" Shuardson, waving the flag for the Shetland Islands (but not resident in that bleak outpost) and winner of the prize for the best trade test in the final exams at Halton, had rummaged around in his attic to produce his test piece for us to envy his skill once more. Sadly, there is not much call for riveted patch repairs in the holiday camp which he now runs and he cannot even use his work as an ash tray without excessive modification. I hope his children appreciate his skills more than the RAF did when it refused to let him sign on again.

A mercifully quick meeting to elect officers and organise finances, followed by a brief interlude to shower and change into more formal attire and then we were at it again; this time for a very replete dinner. Tom Faulkner demonstrated that at least he had learned something vaguely useful at Halton by producing a set of bagpipes to pipe us in to the tune of "The Old Black Bear". Amazingly, the cream of chicken soup remained uncurdled! And as we sat down, who better qualified to say grace than our own resident Reverend, Richard Hambly? 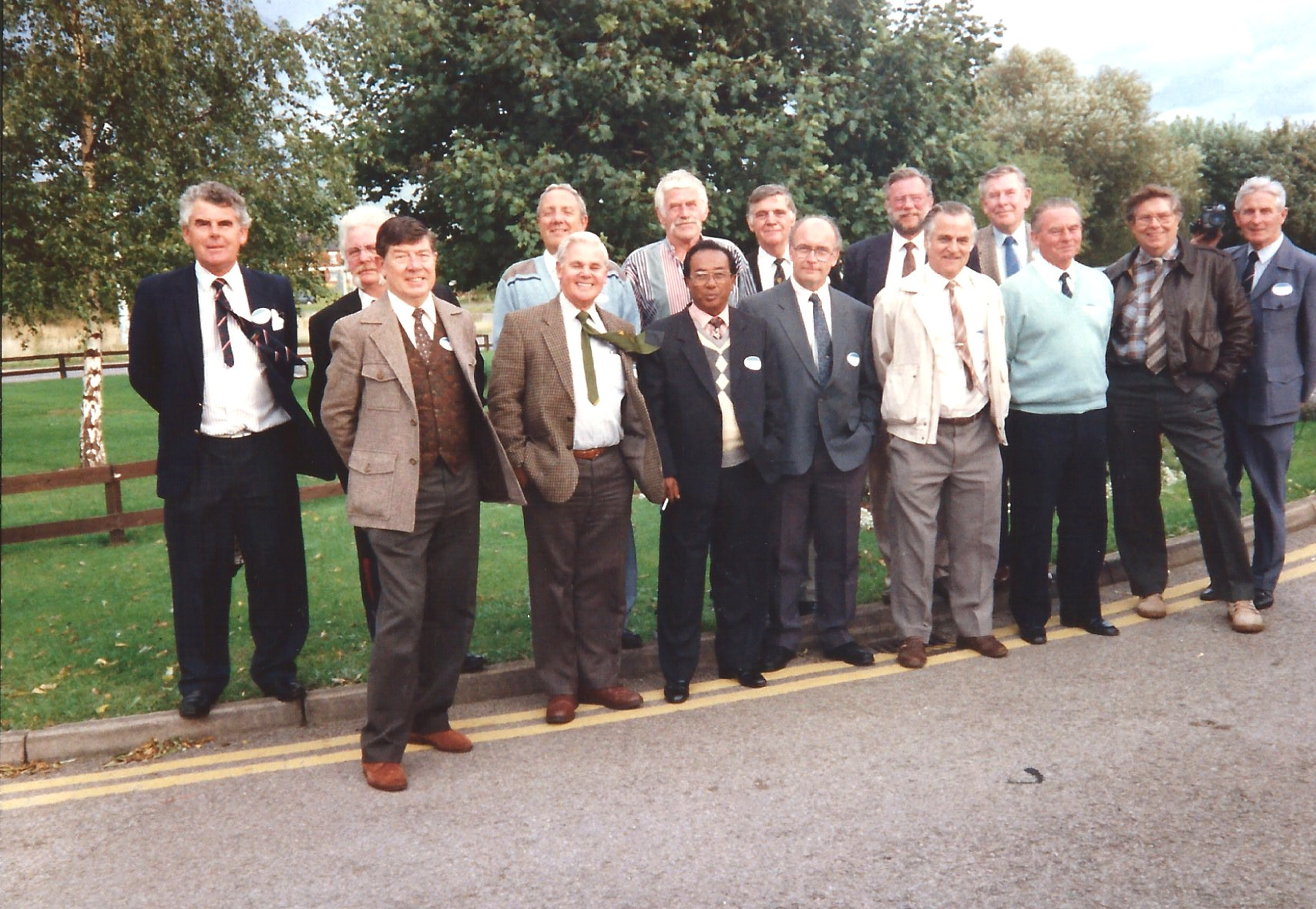 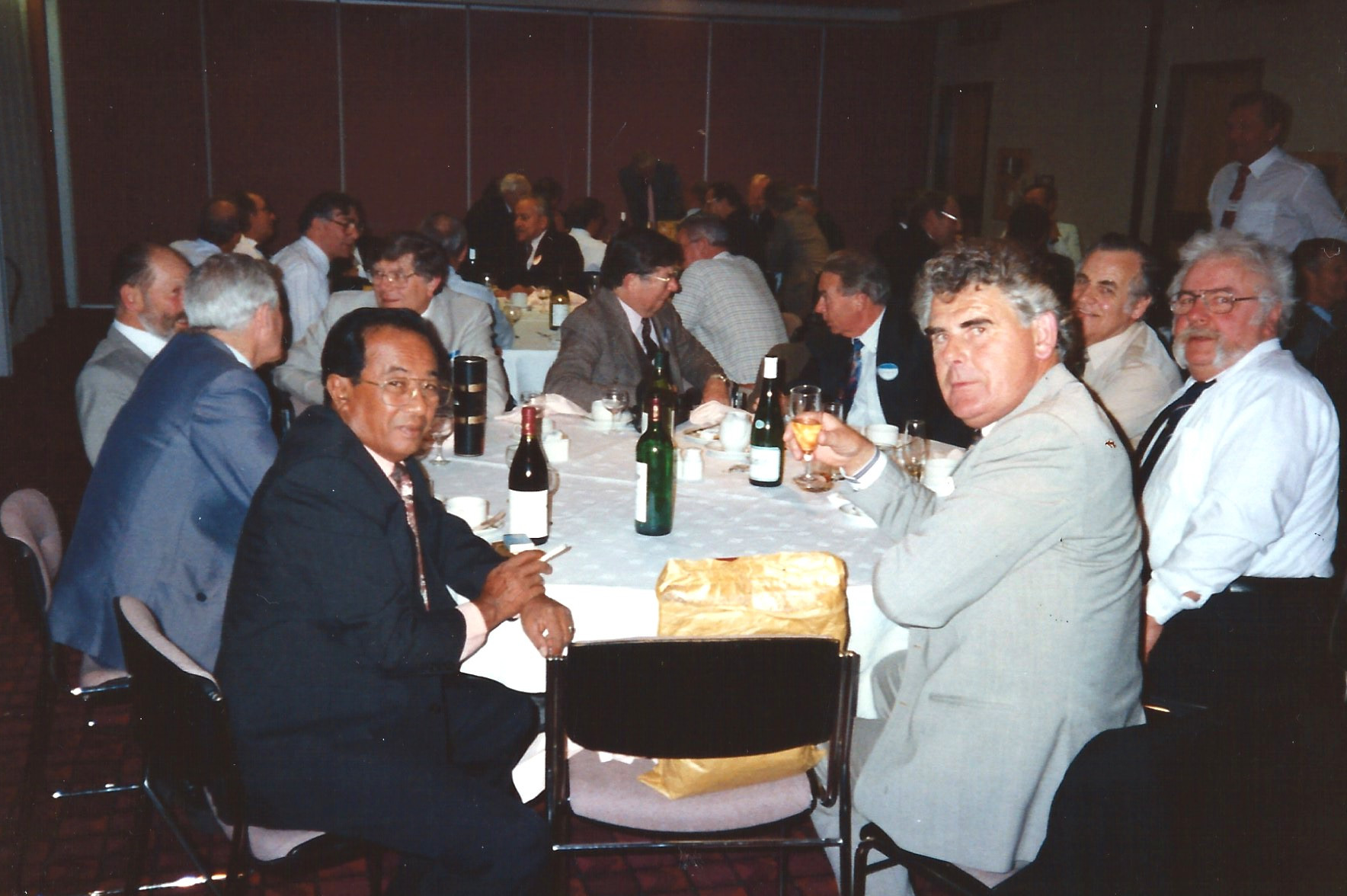 If we had a vote for popularity, I think it would have to go to Gordon Weston who very graciously supplied the wine. Gordon apparently has the good fortune to own a hotel which obviously has a more than adequate cellar. We look forward to seeing the publication of his address so that we can sample some more of his best vintages. Personally, I must have renewed my reputation for craftiness when I negotiated the exchange of my gooey desert for a plate of Stilton cheese to accompany Gordon's excellent St Emilion, rounding off a most enjoyable evening.

The following morning we were naturally a little more subdued. One stalwart claimed to have braved the 10°C temperature of the minuscule hotel swimming pool before breakfast but could produce no witnesses to his efforts. In the event, we were grateful that "Yorkie" Calvert no longer dons a greatcoat over his pyjamas to sound reveille. At the inevitable post mortem over the cornflakes it was generally agreed that it had been a worthwhile effort and that we should do something like it again, perhaps with a bit of golf thrown in and certainly without waiting for another forty years to elapse. Our thanks to Tony, Frank and Gordon for their efforts.

It seems that the only songs most notably associated with our time at Halton were "Yellow Ribbon" and "Leaving Khartoum" - which always struck me as being somewhat banal. Not that I haven't been known to sing banal songs as off-key as the best of them, even accompanying myself with a badly tuned guitar; it's just that I remember it, the chorus of the old school song "Forty Years On" which I and my schoolmates once bawled out lustily at the end of term would have been more appropriate to the occasion. I'm sorry I can't supply the music but you can change the numbers to your own sporting preference.