Warriors on the Base - RAF Lakenheath, Suffolk 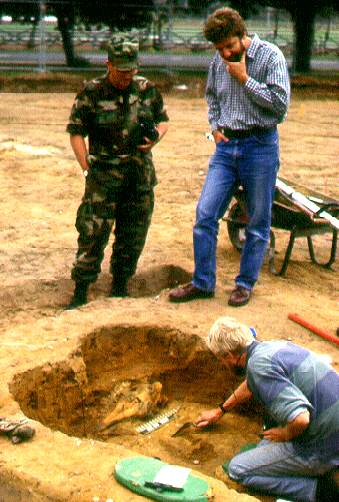 The 1,500 year old remains of at least 140 Anglo-Saxons have been discovered at RAF Lakenheath, near Newmarket, Suffolk during initial preparation of a dormitory complex on the base.

The site is close to the Little Eriswell cemetery that was excavated in the 1950s and would appear to be broadly contemporary with the earlier discovery with furnished graves of sixth and early seventh century date. Excavation work is being carried out by the Field Team within the Archaeological Service at Suffolk County Council under the direction of Joanna Caruth and is being financed by the Ministry of Defence. Close on-site support is also being given by United States Air Force personnel which is appropriate as the 1950s work was largely carried out by USAF staff.

The cemetery presently being excavated is only 200 metres from the well-known Little Eriswell site and though physically discrete must form part of the same Fen edge funerary complex with the nearest known contemporary settlement site being some 50O metres to the north-west around a spring and small stream called Caudle Head on the Eriswell/Lakenheath parish boundary. Grave finds to date have included the standard range of Early Anglo-Saxon artefacts such as brooches, beads, pins, spearheads, knives and shield bosses while one male grave was particularly well furnished with a sword, large spearhead and elaborate shield fittings. It is also noteworthy that the site has suffered very little agricultural or other erosion and the presence of chalk bands in the predominantly sand and gravel dominated natural geology has led to less acidic grave-fill conditions and therefore good skeletal survival in many of the burials. The cemetery includes a good cross-section of the local Anglo-Saxon population with adults and infants present and it is likely that the final grave count will be around 200 inhumations and 10 cremations. It is also hoped that the work, which is scheduled to run until early November will fully define and then excavate all of this part of the Little Eriswell cemetery complex.