The precise date and manner of the English settlement is still a matter of considerable debate. The traditional view is that invading Anglo-Saxons drove out or killed the Romanized inhabitants of Britain. However, at the end of the Roman period we have little archaeological evidence of violent destruction. Some Germanic people were in fact deliberately settled in Britain by the Romans to help defend them against both civil unrest and raiding barbarians. Late Roman metalwork of a type associated with these Germanic mercenaries has been found in Suffolk at Lakenheath, Icklingham, Ixworth, Brent Eleigh and Felixstowe.

By the mid-5th century the Lark, Blackbourn and Ouse valleys of west Suffolk had been settled by a mixed group of immigrants of Anglian, Saxon and Frisian origin, using 'facetted-angled' pottery of a type that can be matched in the Elbe-Weser area of Germany. In the east of Suffolk, the picture is not so clear. We have evidence of 5th-century settlement from Felixstowe, Hacheston and Waldringfield, while 6th-century cemeteries form an arc from the head of the Orwell to the head of the Deben. Heathland along the coast may explain why no Early Saxon remains have been recorded there, but the total absence so far of early settlement in the Shotley peninsula remains a mystery. Evidence is mounting for penetration along the Waveney valley - but nothing yet for the hinterland behind Dunwich. Finally, the extensive clay soils of Central Suffolk show no traces of settlement, although we know that they were occupied in the Roman period. The fate of those Romano-British settlements and of their once substantial populations remains unknown. It therefore seems that the early Anglo- Saxon settlers of Suffolk, whether invited or invaders, moved into an already managed landscape, preferring the more easily worked lighter soils and gravel terraces.

West Stow is the only settlement of this period to have been extensively examined, although fragments of others have been excavated at Honington, Grimstone End in Pakenham, Little Bealings and Hacheston. The settlement at West Stow is, however, probably typical of the communities of the period. It consisted of a number of family units, each with a hall and up to six or so other buildings for storage, workshops and living accommodation. Their mixed economy was based on the growing of wheat, barley, rye and peas, the keeping of sheep, cattle, pigs, horses and goats, supplemented by fishing, wildfowling and some hunting of red and roe deer. Settlements of this type seem to have been successful and largely self- sufficient, trading only, by the late 6th century, in luxury items such as jewellery, occasional glassware and some pottery. 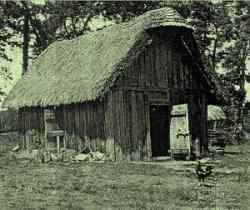 Much of our information concerning the Early Anglo- Saxons comes from cemeteries and from isolated finds. The predominant burial rite in Suffolk was inhumation, though inhumation cemeteries do also include a number of cremations. In one case, at Lackford, cremation was used on a large scale, comparable to the totally excavated cemetery at Spong Hill in central Norfolk. The extraordinary ship-burials at Snape and Sutton Hoo must surely be royal and demonstrate the wealth, power and long-ranging contacts of the East Anglian dynasty of the Wuffingas.

The 7th century was a period of great change. The consolidation of the kingdom of East Anglia, the advent of Christianity and the development of Ipswich as a town trading with the Rhineland, were reflected in the countryside by the abandonment of old settlements and the establishment of new. Whatever the causes of this shift of population, the move, if West Stow is typical, took place over several generations. Some of the new sites were grouped around churches and became the cores of later Saxon and medieval villages, while others were merely outlying farms.

The pattern of Early Saxon settlement is best known in the west where, in the valleys of the Blackbourn and Lark, the division of land was apparently much the same as that of the later ecclesiastical parishes.

The most prominent features of this period are the large dykes built across the Icknield Way. Only the most easterly of these, the Black Ditches, is in Suffolk. The largest is the Devil's Dyke, just west of Newmarket. The purpose and date of these earthworks is uncertain, but they appear to be late Roman or later and were built against an enemy approaching from the west.

From "An Historical Atlas of Suffolk" (ed) D. Dymond and E. Martin, (Suffolk County Council and Suffolk Institute of Archaeology and History) 1988 (at present out of print but a revised edition is due to be published in 1998).