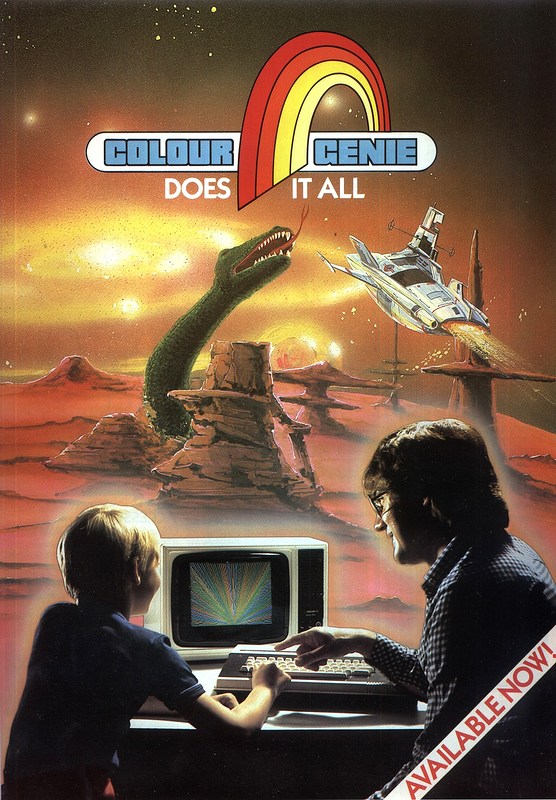 Colour Genie Does It All!

The EG2000, or Colour Genie, was released at about the same time as EACA International's update to its original 1981 monster computer, the Video Genie. By now known as the Genie I (with built-in tape) and the Genie II (with floppy disk), EACA re-positioned these and the higher-specced Genie III as business machines, whilst the Colour Genie was aimed at the home market. First released in Germany in August of this year, it was soon available in the UK via the same company that had been shipping the earlier models - sole distributor Lowe Electronics. The machine was something of a puzzle to its reviewer in June 1983's Personal Computer World, with Maggie Burton saying "I'm puzzled. The extraordinary attention paid to hardware detail in this machine is tempered by some serious doubts and disadvantages". One of these appeared to be reliability, with one dealer claiming that he'd had to return 75% of his machines to Lowe. On the other hand, the review continued that "The Genie is a machine with a lot of potential in the hands of an expert" and that "judging by the software seen on it, great things are possible"[1].

EACA has previously made its machines compatible with the TRS-80 Model 1, a computer that had been first launched in 1977, but broke with that tradition for the Colour Genie even though the machine had the same Z80 processor in it. Prototype Colour Genies (also known as the Genie IV) couldn't even read tape from previous models, although Lowe suggested in September 1982 that EACA were considering changing this[2].

The Colour Genie retailed for £199, or about £740 in 2022 money, which put it head-to-head with machines like Commodore's VIC-20 or the Dragon 32, although it beat the VIC with 16K memory. Somewhat disingeneously, the advert compares BASICs and states that whilst the Colour Genie has Microsoft BASIC, the VIC 20 does not. Actually, Commodore's BASIC was based closely upon Microsoft's - it was still using the same licenced version that it had purchased to put on the Commodore PET of 1977 (with some modifications). Commodore's particular agreement meant that it didn't have to show any MS copyright - an arrangement that only lapsed when it had to re-negotiate for a 16-bit BASIC to go on the Amiga range in 1985.

EACA was a somewhat mysterious and enigmatic company, with Personal Computer World saying "nobody seems to know much about EACA International except that it is in Hong Kong"[3]. The company's founder legged it to Taiwan after the company went bust at the end of 1983[4].