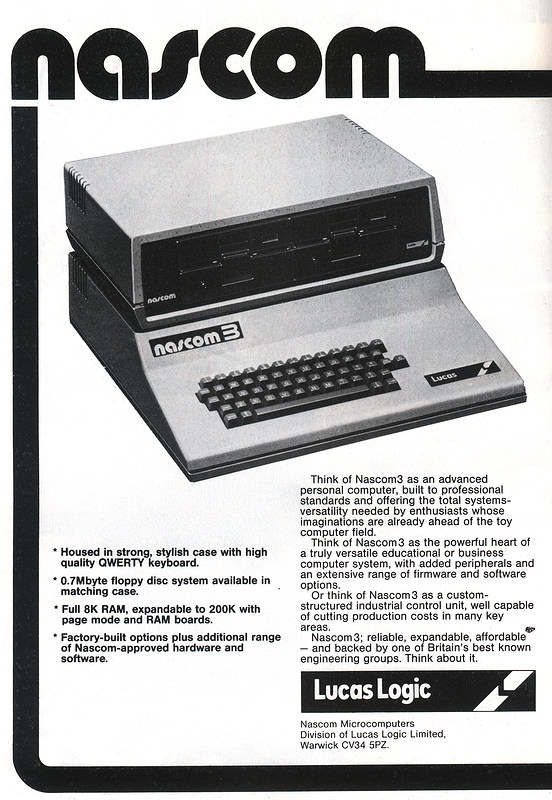 Perhaps implausibly from the company better known for car parts - belts, bulbs and oil filters and so on - comes the Nascom 3, courtesy of Lucas Logic. Lucas had bought Nascom in 1982, after a previous takeover bid by Altech Limited had fallen through, effectively rescuing it as the company had been in difficulties since 1980 when the world shortage of 1K static RAM chips led to the ceasing of Nascom 2 production[1][2]. After the buy-out, Lucas effectively re-released the Nascom 2 with a case and called it the "3".

Whatever Nascom's financial troubles and the fall from its 1979 position as the manufacturer of the most popular computer kits in the UK, during 1982 Nascom was still at number four in the "top ten" by units sold - according to a BIS-Pedder survey published in Personal Computer World - with 6.6% of the market[3].

The Nascom 2 was unexpectedly relaunched in 1985 - five years after it originally debuted - when Lucas Control Systems started offering it in board-only form for the sum of £310, or £970 in 2020, along with optional extras such as memory, graphics controllers and disk interfaces[4]. The machine, or at least its Mark 1 version, also popped up unexpectedly in 1986 at the Personal Computer World show, when it was set up against the Commodore Amiga in a 1981 versus 1986 face-off. It wasn't exactly a fair fight unless, as Popular Computing Weekly pointed out the fight was based on the rivals "bludgeoning each other to death" with their machines, in which case the Nascom might have had the edge. The competition was set up by software house Level 9 in an attempt to highlight how far microcomputers had come in the previous five years, as it dressed up its stand in the style of a museum and staged a "computer battle" between the 2MHz 8-bit monochrome Nascom and the 16/32-bit 4096-colour 7MHz 68000-based Amiga[5].