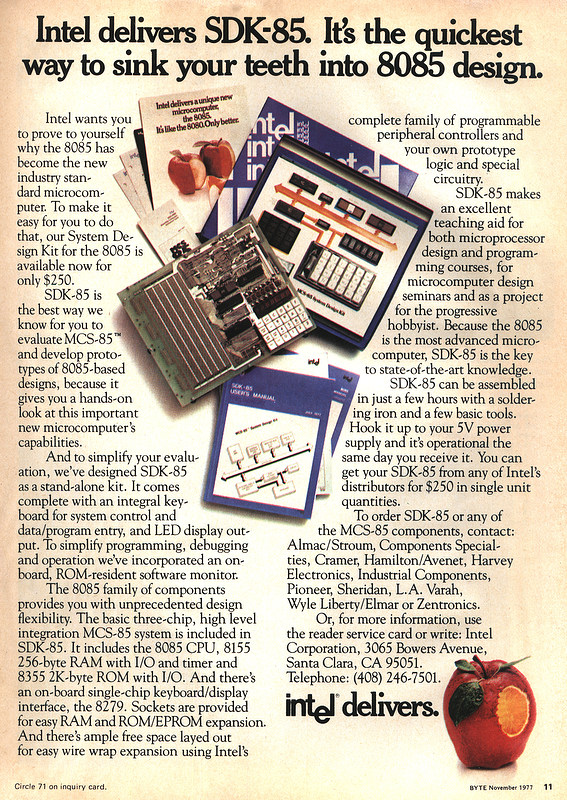 "Intel delivers SDK-85. It's the qickest way to sink your teeth into 8085 design"

Back in the 1970s, almost every time a new CPU came out, it would most likely possess an entirely new instruction set. Even within the same range of computers, often code would have to be changed between models as memory addresses would be different depending upon how much RAM was available, so developers needed all the help they could get. This advert is for an Intel Software Development Kit - the tools needed to write code against and develop hardware to run with Intel's new 8085 (the 5-volt version of the 8-bit 8080, the original version of which had been used in the Altair 8800 and IMSAI 8080 amongst many others). It included the actual hardware - 8085 CPU, 256 bytes RAM, I/O and timer and 2K ROM, all for only $250 (about £1,160 in 2021 money). Note that there's quite a similarity between the bitten apple and Apple's logo.

Intel was one of the "Fairchildren" - one of many companies that formed when the "Traitorous Eight" left William Shockley's Fairchild Semiconductor. In this case, it was Robert Noyce and Gordon Moore, the latter of which would later coin "Moore's Law", which loosely states that processor power will double every 18 (or 12) months. Intel came to dominate CPU manufacture during the 80s and 90s, in particular thanks to its de-facto alliance with Microsoft in the "Wintel" (Windows/Intel) hegemony, although ARM, the company that formed out of Acorn Computers has, thanks to licencing and the subsequent use of their designs in almost every mobile phone ever made, has probably "sold" more chips. Whilst known for its headline x86 line which grew out of the 4040 and 8080, via chips like the 8085, 8086, 80186, '286, etc (together with maths co-processors, until they were finally permanently integrated with the main processor in the 486DX), Intel had also dabbled with other application-specific chips, including in 1983 the 82730 "text co-processor" - a chip which was intended to mean "more powerful word processing at a lower cost for users". It offered 200 characters per line, 2,000 scans each frame window (whatever that meant), windows, dual cursors, a zoom feature and a virtual screen mode and, according to Intel, could be used with 8-, 16- or 32-bit data buses. Intel's Bill Ringer said of it that "we are giving the word processor designers facilities to implement features which previously were very clumsy". Personal Computer News said of the whole thing that "it makes the possibility of applications software embedded in silicon look more and more likely"[1]. Whilst software had been available on plug-in chips since at least Commodore's PET in 1977, through the Exidy Sourcerer right up to the BBC Micro, hardware-based applications didn't in the end destroy the software industry.